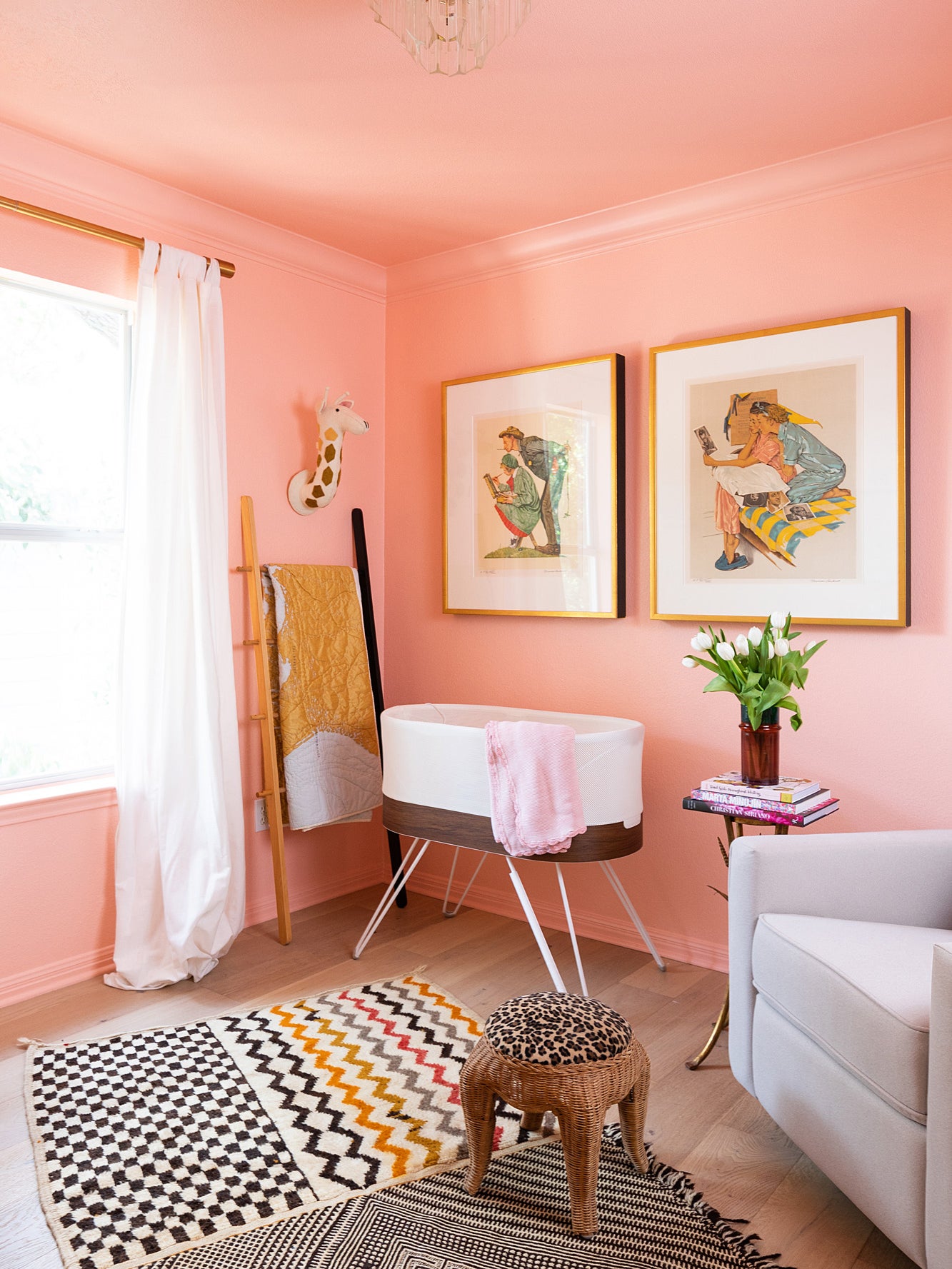 If you ask Allison Crawford, the big question on the mind of every nondesigner who is decorating a room is: What paint finish do I use? The answer, as we learned from touring her newborn daughter Lia’s nursery, is surprisingly uncomplicated: Don’t choose one at all.

Since she was concerned blush would read cliché in a little girl’s room, Crawford chose Pop by DTC brand Clare, a peachy pink shade that, like the rest of the company’s zero-VOC wall paints, only comes in an eggshell finish. The swatch, as advertised, is meant for walls, but to simplify the decision-making process, Crawford used it on every surface in the 100-square-foot space—including the ceiling, trim, and doors. This allover approach has another upside: It creates the illusion that the room is bigger than it really is. “It adds cohesiveness,” Crawford explains. “Plus, using paint is the least inexpensive way to redo a room.”

With the palette taken care of, the designer could focus on the most important task at hand: Making room for baby. Here, she shares three more ideas for maximizing square footage in a small nursery:

Color Outside the Lines

Instead of leaving the floating book racks she found on Amazon (for $35!) white, the designer painted them the same exact color as the walls. “It totally looks custom,” she says. The shelves blend into the background, allowing some of the more playful pieces, like the two vintage Norman Rockwell prints (family heirlooms) and a stuffed giraffe by the bassinet, to stand out.

Choose Furniture That Will Grow With Them

A six-drawer dresser that Crawford scored at the Salvation Army for $40 now doubles as a changing station. “I wanted it to seem like a nursery but not in a traditional sense,” says the designer. The top is currently babyproof, with a rainbow mobile made out of felted wool balls hanging overhead, but the nook can transform as Lia gets older.

Stay on Top of Labeling

While Crawford and her husband were on their honeymoon in Iceland last year, they binge-listened to the audiobook version of Marie Kondo’s The Life-Changing Magic of Tidying Up. “When we got home, I locked myself in the house for five days and organized everything,” she recalls. The method stuck. Today, Crawford folds her daughter’s clothes Kondo-style to save space in the drawers.

In the closet, the baby’s blankets and toys are grouped into different bins by category. “I own two label makers, but I still prefer hot pink painter’s tape and a marker,” says Crawford, laughing. Lia will be learning the ropes early.

See more stories like this:  A Cool, Contemporary Nursery That’s Not Afraid of a Little Neon When Justina Blakeney Is Your Friend, You Get the Coolest Nursery Christene Barberich’s Nursery Includes a Technicolor IKEA Hack