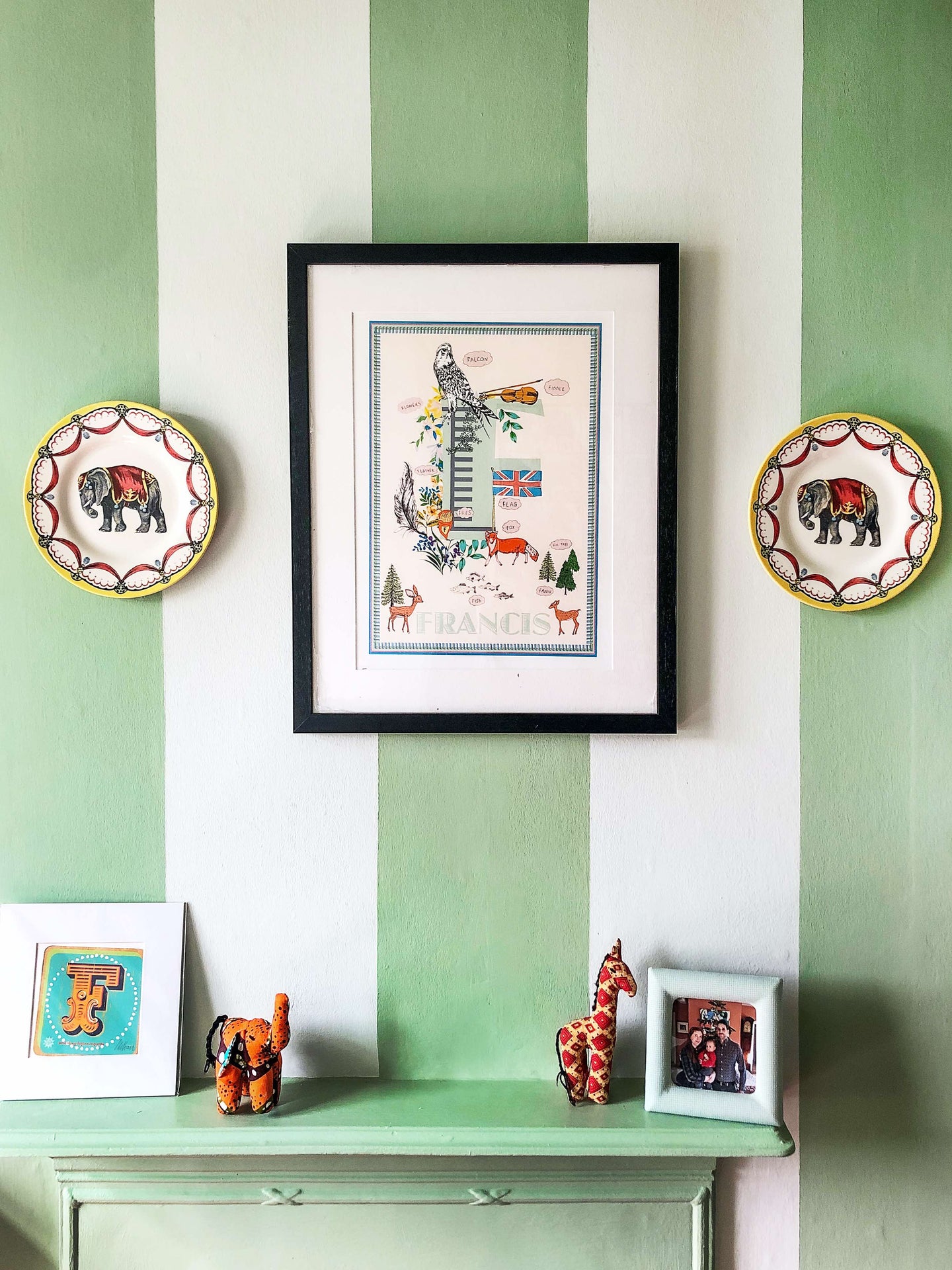 “Quirky without being babyish” was mom Kitty Patterson’s brief to herself when decorating her 19-month-old son Francis’s bedroom. Her solution? Walls adorned with playful green stripes. Enchanting and whimsical, the idea proved to be a much more budget-friendly solution than the striped designer wallpaper that had initially caught her eye. “It’s easier to paint stripes than hang wallpaper, and obviously it’s much less of a commitment,” explains Patterson, who lives in Brighton on the southern coast of England.

Look closely and you’ll notice that the colorful stripes (Verdigris by natural paint company Edward Bulmer) aren’t offset by plain white but by the brand’s pale blue-green Duck Egg. “I’d seen someone on Instagram use two shades close to each other for stripes to great effect, and in a magazine I’d spotted a kitchen with green tones that were alike, so I knew these would work together,” says Patterson of her inspiration.

She determined the dimensions of the stripes herself but entrusted a decorator friend to bring them to life. “At first I worried that it looked like a football uniform!” she says, laughing. But filling the space with wood toys, books, and textiles such as window shades and wall hangings tempered the graphic lines.

Typical of many homes from the era, Francis’s room is a small box shape, so once space had been factored in for the crib and a chair (as well as accounting for the original fireplace and window), the challenge lay in providing sufficient storage. With a keen eye for all things preloved, Patterson sourced an Edwardian chest of drawers for one of the alcoves and embellished it with decoupage scenes from Noah’s Ark. “Francis loves pointing out the animals and saying their names and going through all his shelves,” she says.

In the opposite corner, a changing table from a charity shop was reimagined in a fresh coat of paint and the handles were updated. Patterson kept the preexisting wall shelves and (like the door, radiator, and woodwork) drenched them in color.

Next on the list to be tackled: the crimson carpet inherited from the previous owner (a bachelor with a penchant for painting walls within a single room a variety of mismatched colors). “We’ll go for a thick beige carpet, since we’ll keep this bedroom as a nursery and babies spend so much time on the floor,” reasons Patterson. Even though Francis is now fast on his feet, mother and son still spend much of their time sprawled out playing there more than anywhere else in the house.

A delay in moving homes meant Patterson didn’t get to overhaul Francis’s room until he was almost 1, but she thinks the setback actually paid off. “If I had decorated before he was born, I would have probably gone for a theme or something very cutesy,” she muses. “Not that this is exactly ‘grown-up,’ but I think it has longevity, and I’m hoping he’ll love it even more as he gets older.”