Painting a Freehand Nursery Mural Prepped This Couple for Parenthood

“It taught us how to collaborate.” 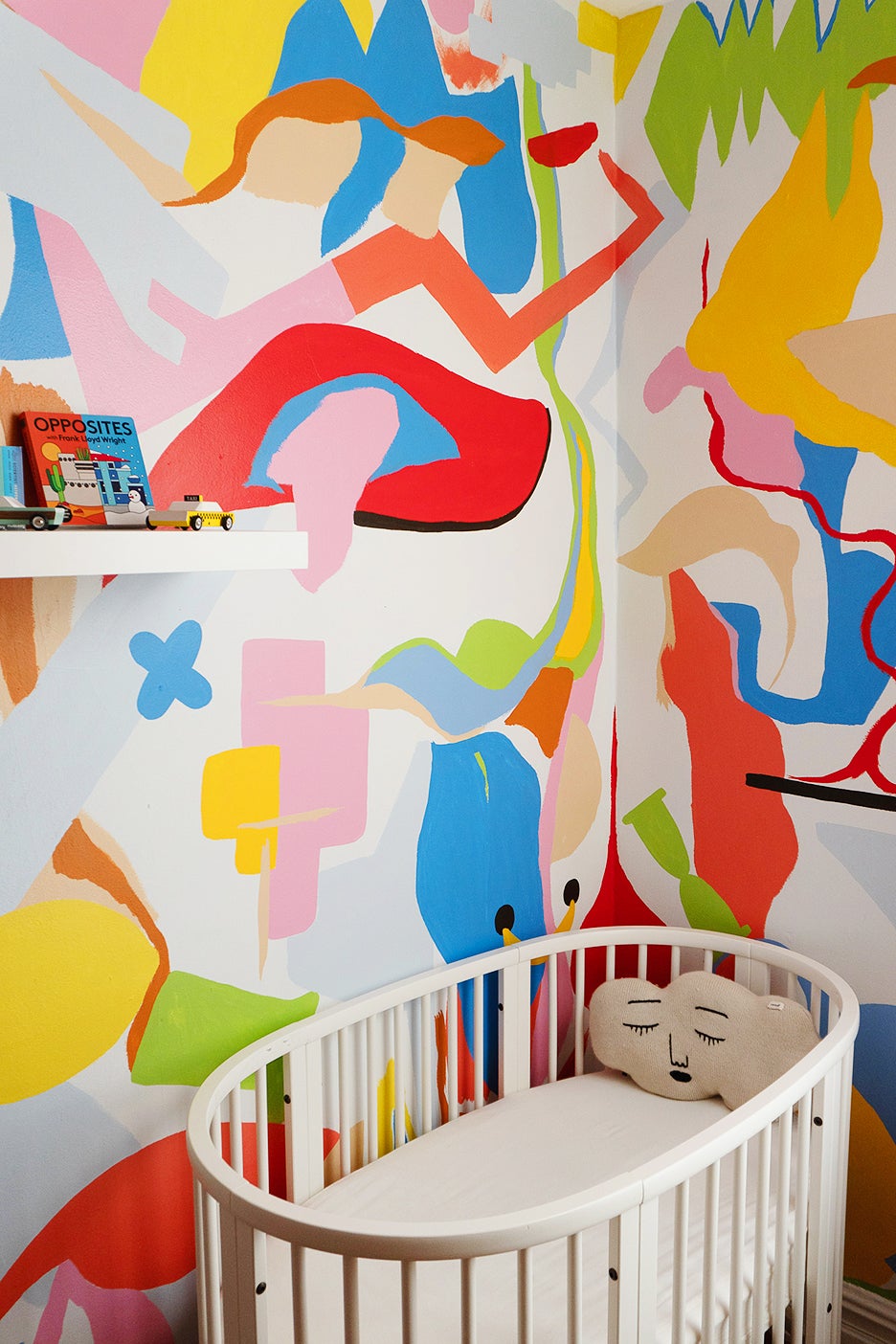 Sally Voyles and Zach Thompson are no strangers to arts and crafts. From homemade Christmas cards to splatter painting, the Brooklyn-based couple doesn’t shy away from the creative. Which is why, in the winter of 2019, six months after finding out they were pregnant with their first child (Slim was born in February 2020), they hatched their next project: A hand-painted, free-form nursery mural. “We were talking a lot about how to be a collaborative team,” says Voyles. “And this mural felt like a physical training ground for what is the ultimate collaboration: parenthood.”

They began with a trip to the hardware store where Voyles, Maisonette’s social media manager, and Thompson, a craft beer salesman, snagged paintbrushes and 12 sample shades of Behr’s satin finish wall paint for only $60. Inspired by Kindah Khalidy’s large-scale abstract paintings, the self-proclaimed color lovers’ only off-limits hue was black (other than for accent moments), opting instead for a more childlike palette with mainly primaries.

After picking out the paint samples, the duo got a case of cold feet. “It felt like such a big undertaking and we didn’t know where to start. We put it off for a few weeks, making up excuses to avoid taking the first step,” says Voyles. But soon enough, without sketches, mood boards, or other tools in hand, the couple began the mural with only their shared vision as guidance. “We sat on the ground for a good half an hour,” Thompson recalls. “But then Sally, being the go-getter, finally opened a can of paint and just started.” She created a blue peanut shape, and from then on a simple routine formed. Standing on opposite sides of the room, Voyles and Thompson painted on their respective walls, and, after a certain amount of time, switched places and picked up where the other left off. “We had two rules,” says Voyles. “The first was that you couldn’t complain when the other person took your design in a different direction than you envisioned. The second: nothing too phallic.”

What came next was two months of painting (“There was lots of stopping and starting,” says Voyles. “Ladders aren’t easy for pregnant women!”), with more shapes joining the family every day, from canary crescents to cobalt squiggles to orange swirls. The free-form mural could be a coloring book come to life. As fluid as it is delightfully nonsensical, every wall is covered in abstract, Matisse-esque designs, creating a space where discovering something new is commonplace. “Observing the mural feels like cloud watching,” says Voyles. “Depending on how you look at it, that one pink blob might resemble a dragon, a fish, or even Queen Elizabeth.”

When the project was finally complete (and with the due date quickly approaching), the couple turned to decorating. Their first priority was making sure the furniture and accessories were as minimalist as their eclectic taste would allow in an effort to let the mural’s vibrancy stand out. A white version of Stokke’s cult-favorite oval crib, white floating shelves, and a white changing table quietly furnish the room, but Voyles and Thompson couldn’t stay away from a few other quirky pieces, like Fiona Walker’s zebra head door decor and a bright teal changer to complement the walls’ hues.

These days, 6-month-old Slim loves being in his room. “He’s a very alert child,” says Voyles. “Sometimes we’ll find him sitting in his crib staring at all the shapes. We’re hoping it inspires more creativity in the future.” As for how the mural makes Slim’s parents feel? “Stressed,” Thompson says, laughing. “But also joyful. Even in the hard times, when we’re struggling to put him to sleep or we’re so exhausted we can’t stand up, we take a step back and look around the room and it reminds us that everything in there we created together, with love.” Voyles adds, “Having a child is an act of optimism. To be constantly reminded of the anticipation and excitement we felt while pregnant with him, even in the dregs of real-world, nonglamorous parenting, is really wonderful.”

While it may sound next to impossible for perfectionists to internalize, Voyles and Thompson’s advice for other DIY paint projects is simple: Don’t overthink it. “It will never turn out the way you intended,” says Thompson. “It’s about just picking up your brush and doing something. It’s never going to be perfect, but it will always be something you made that doesn’t exist anywhere else. It came from you. Trust yourself. Oh, and keep the windows open.”

If you don’t consider yourself a painter, but love the mural look, try a wallpaper instead. Pierre Frey’s Karma design is an abstract canvas in wallpaper form. Or if you want something with more defined shapes, Rhyme and Reason from Chasing Paper feels like a sketchbook come to life. 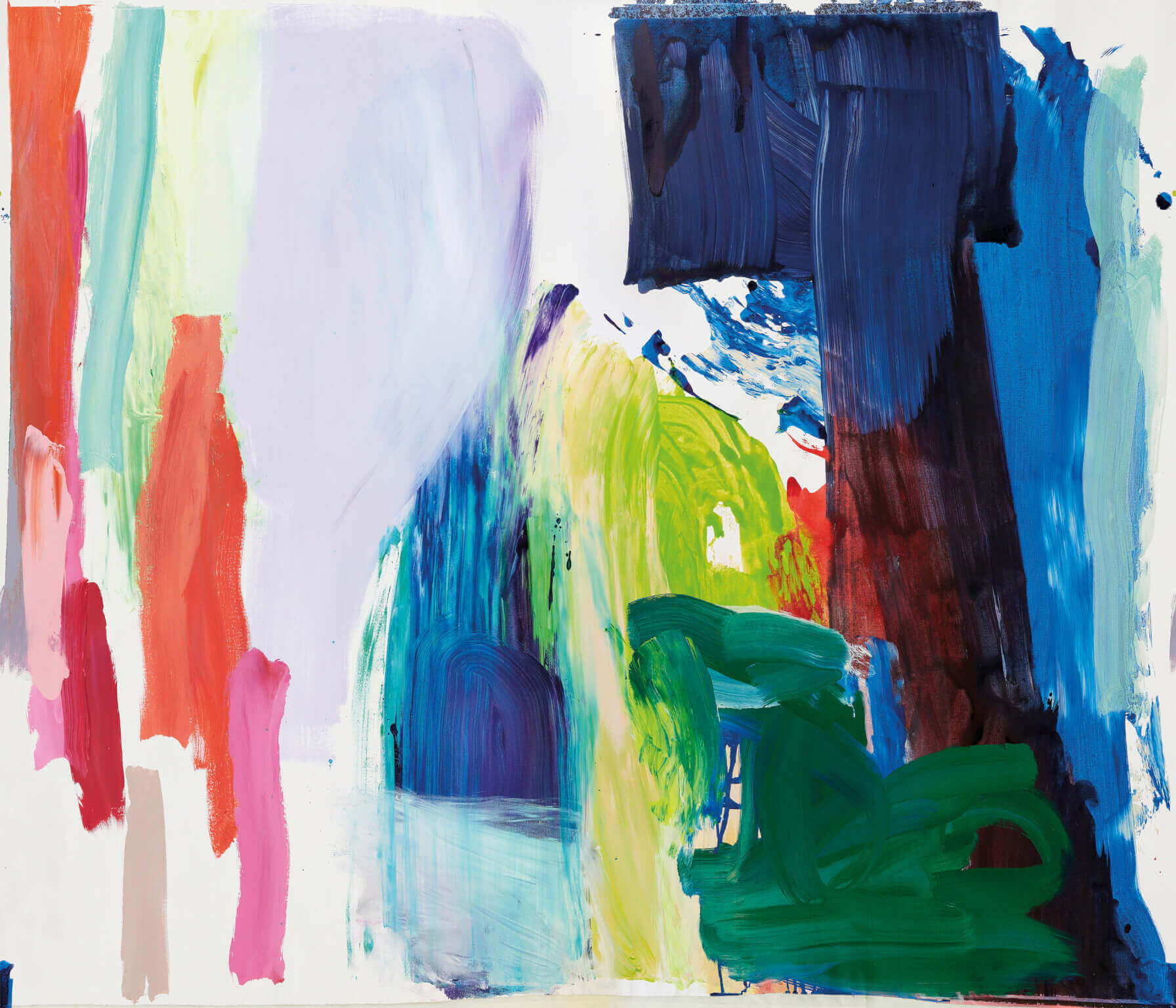 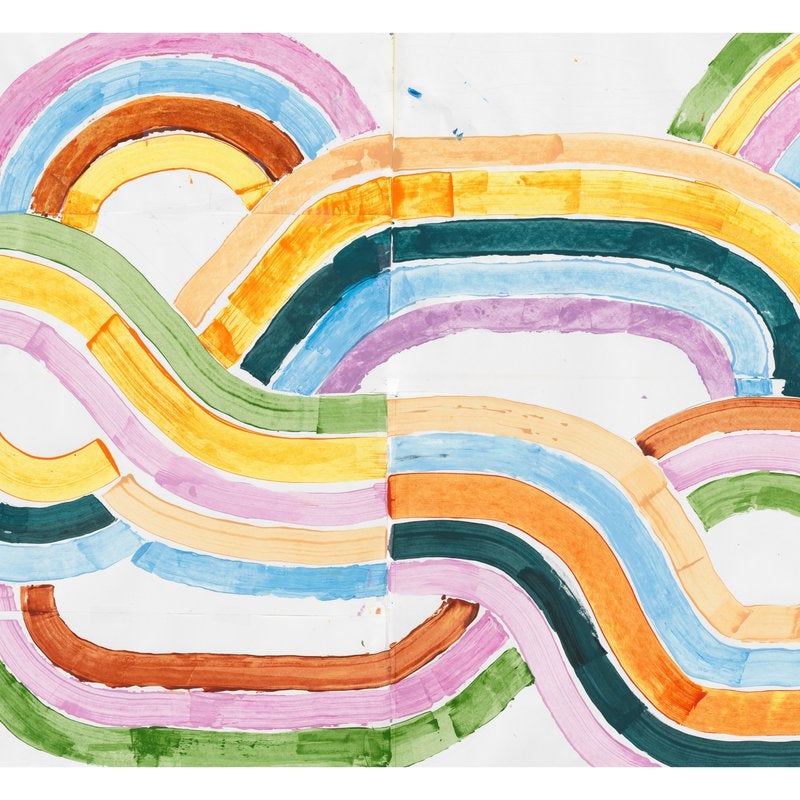 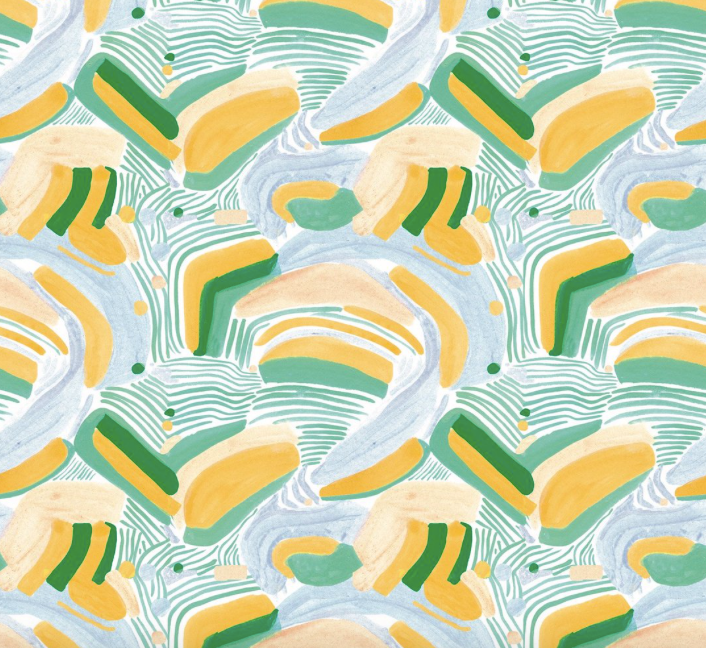 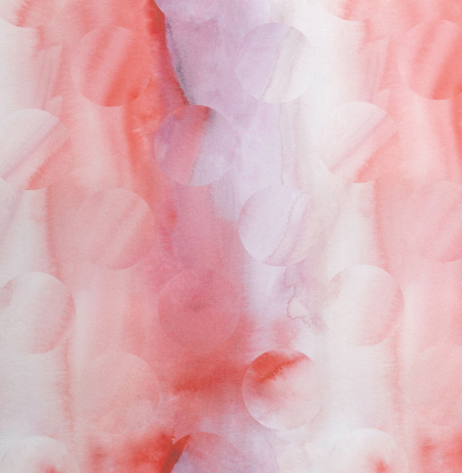