It helped her organize her 100-plus tchotchkes. 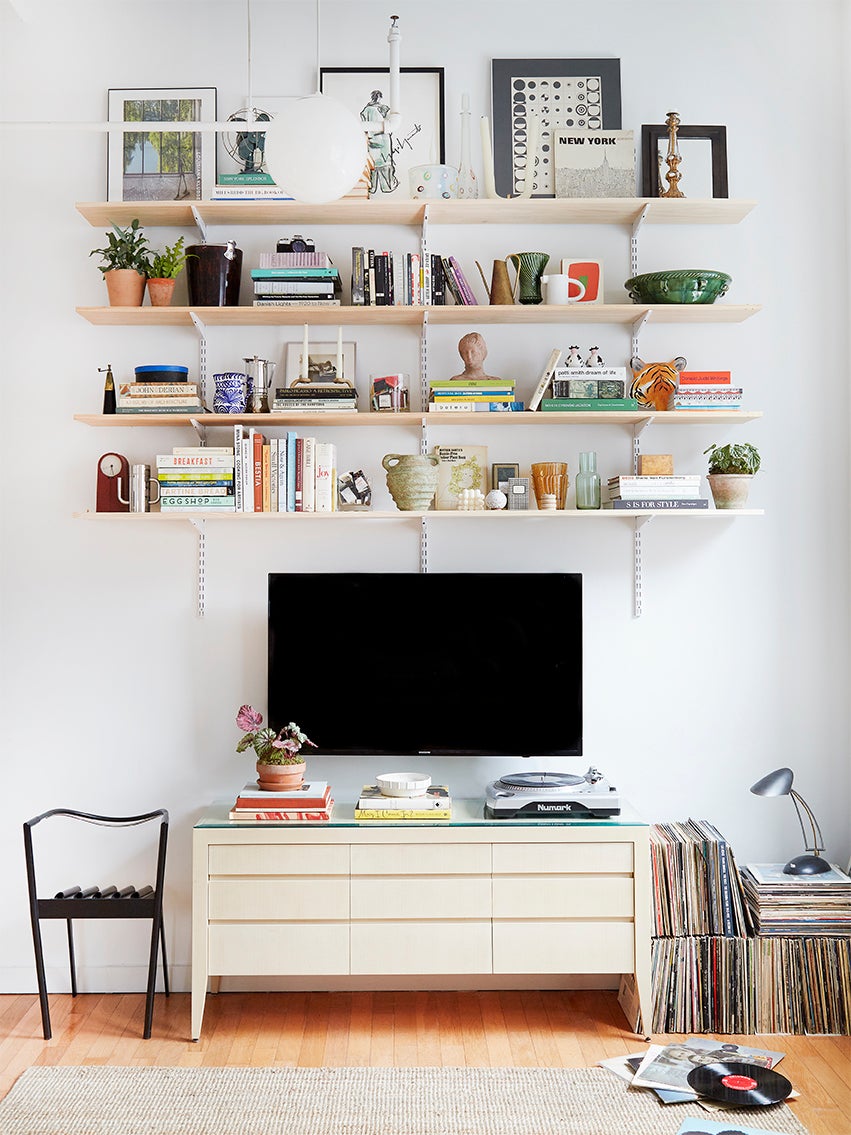 Domino’s associate style editor, Julia Stevens, is a self-proclaimed “lover of stuff.” From a terracotta bust to cow-shaped salt shakers, her apartment reflects who she is through carefully curated souvenirs and meaningful mementos. But with such a keen eye for collecting comes the necessity of a hardworking organization system—and in January, when Stevens and her roommates left their Bushwick, Brooklyn, apartment in favor of a Williamsburg upgrade, it was time to get serious about installing one.

Their new home, an airy three-bedroom, has fewer closets than inhabitants (most of the trio’s clothing is kept in a makeshift wardrobe in the front hall) and lacks any real storage space, leaving little room to store and display their 100-plus found objects. So Stevens took the tried-and-true advice to “build up” and used the vertical space they did have to make up for what they didn’t. “I was really inspired by Jordan Ferney’s library-esque shelving system,” says Stevens, who was on set for Domino’s Winter issue shoot in which the shelves are featured. “That’s the look I wanted to re-create.”

Enter: the local lumberyard, where they scored two pieces of unfinished pinewood for just $15 each to match their preowned shelves. Next, a trip to Home Depot provided the rest of the supplies needed to create the massive shelf wall they envisioned—three upright shelving tracks, 12 twin track brackets, and nine toggle anchors.

With a little help from an experienced builder friend and a trusty drill and measuring tape, the 5 1/2-foot-tall system started to take shape. “Measure twice, drill once!” Stevens says, laughing. “It’s important to be sure of your desired height and width before you start so mistakes aren’t made.” (You can find Domino’s step-by-step guide to installing the similar Elfa shelves here.)

What resulted was not only a utilitarian storage system sturdy enough to withhold more shopping finds, but also an update on the classic gallery wall that acts as the apartment’s centerpiece above the entertainment hub. Below, Stevens outlines her top tips for styling (and restyling) shelf systems, keeping practicality top of mind.

The best way to ensure functionality with your shelves is by organizing according to use. If you’re going to be constantly grabbing something, put it on the lower, most easily accessible shelves. For us it’s our cookbooks, teapots, and matchboxes. The top shelf is a great place to prop art because you have the most vertical space. Squeezing a tall object into a constrained space never looks good, so use that top shelf to your advantage.

When styling shelves, it’s all about instinct. It has to feel right as much as look right. For instance, while we love bold design, in the middle of our process we started to sense that the setup was too colorful. It looked great, but we just felt that something was off. There are tricks you can employ to spread saturated objects around and quiet a loud space. Certain book spines are big offenders for us, for instance, so we started flipping them around so the pages faced outward for a more neutral look. There’s always a fix for small issues like that.

It’s important to establish a sense of contrast when you’re styling so many smaller items. For instance, I love a mix of horizontally and vertically stacked books. Moving between old and new things is nice, too, like placing a family heirloom next to something from IKEA. While I sometimes like to keep similar objects together, such as a collection of photographs, I try to avoid having the same quantity of items in all the groupings. And in general, odd numbers of things look better together. Just like the trio behind the one-of-a-kind shelf design.