But you could never tell. 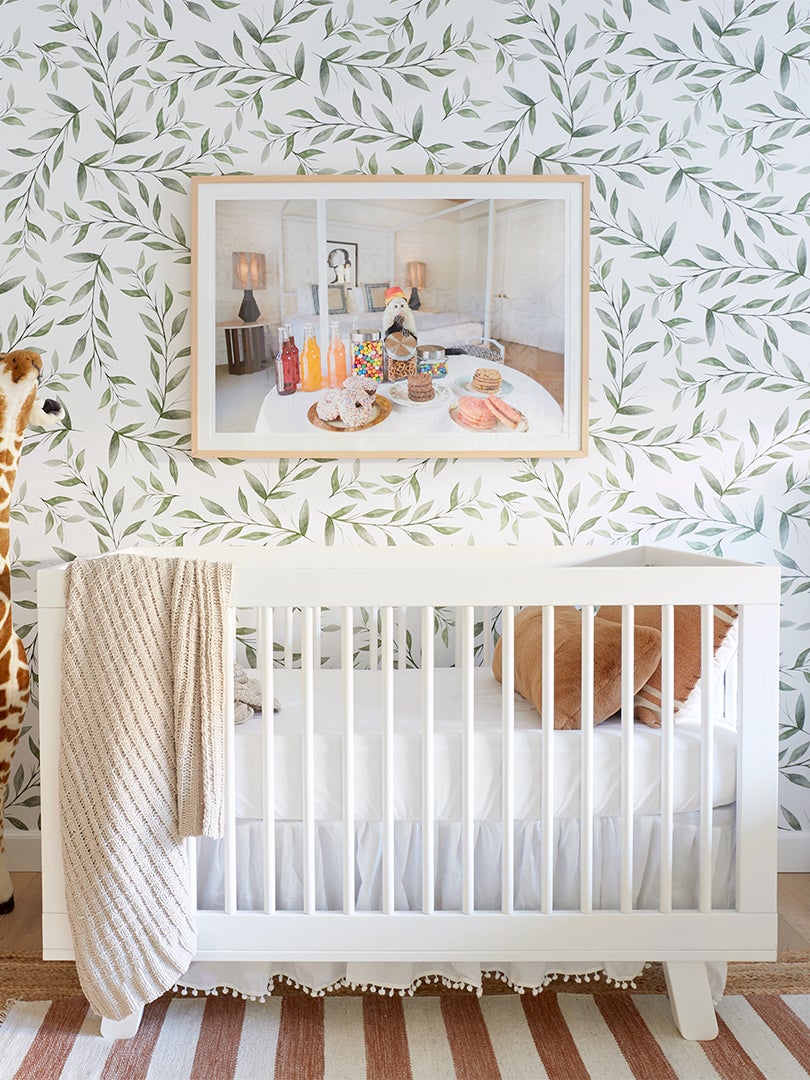 Interior designer Amber Sokolowski had one goal when redecorating her nursery for her second child: Reuse every single piece of furniture. Still, she wanted it to look entirely different. Before her daughter  Mila, now 3, was born, she covered the room in bright pink and gold tones. When she got pregnant again, she knew she wanted to keep the nursery in the same location (it was the only bedroom on the same floor as the master) and move her growing girl upstairs.

“I tried to be as smart and sustainable as possible,” says Sokolowski. Luckily, she had originally purchased neutral items she could easily repurpose: a simple white crib, an IKEA dresser, a frameless full bed, and a pale gray rocker. Using these as a base, she imagined a leafy, animal-themed respite for her baby boy, Liev (which means lion in Russian). Here’s how she completely transformed the space using repurposed items and a few DIY hacks.

She Found Her Wallpaper on Etsy

A Gray Malin print of a monkey eating sweets in a hotel room, purchased at the photographer’s studio sale, inspired the whole scheme. Sokolowski spent hours researching wallcoverings that would complement it and ultimately landed on a leafy peel-and-stick option she discovered on Etsy. “I kept coming back to it because it didn’t compete with the photograph.”

She Upgraded Her Existing Furniture

Sokolowski’s existing IKEA dresser still had its standard pulls, so she swapped them with brass hardware from Rejuvenation. And though she kept the full bed’s white linens, she gave the frame a facelift with a white wicker headboard she found on Amazon for under $300. She finished off the look with green and gold pillows.

She Transformed a Mirror with a Spritz of Paint

When Sokolowski purchased the mirror that now hangs above the dresser, it had a whitewashed wood finish. But she had other plans: With a couple of spray paint cans at Michaels, she gave it a dark green finish that pops against the lush wallpaper.

She Fixed a Space Problem With Fabric

The traditional sliding doors that once covered the closet meant she could only access two feet of the storage space at a time. That wasn’t going to fly this time around. To solve the issue, she removed the doors and replaced them with a St. Frank fabric, which she had her local seamstress hem into a curtain. She hung it with an inexpensive hospital-style track from Amazon. “Now, I use that space for more than just clothes,” she says. “I keep diapers, wipes, and accessories in there too.”

The inexpensive roller shade constantly fell off its track when the space was her daughter’s nursery, so Sokolowski knew the window covering needed a serious update. A custom option would ensure the fit and material were perfect to lull her baby asleep, but drapes were a must to finish off the look. Serendipitously, velvet ones on sale at West Elm fit the color palette just right.