From nursery to Wes Anderson–inspired wonderland. 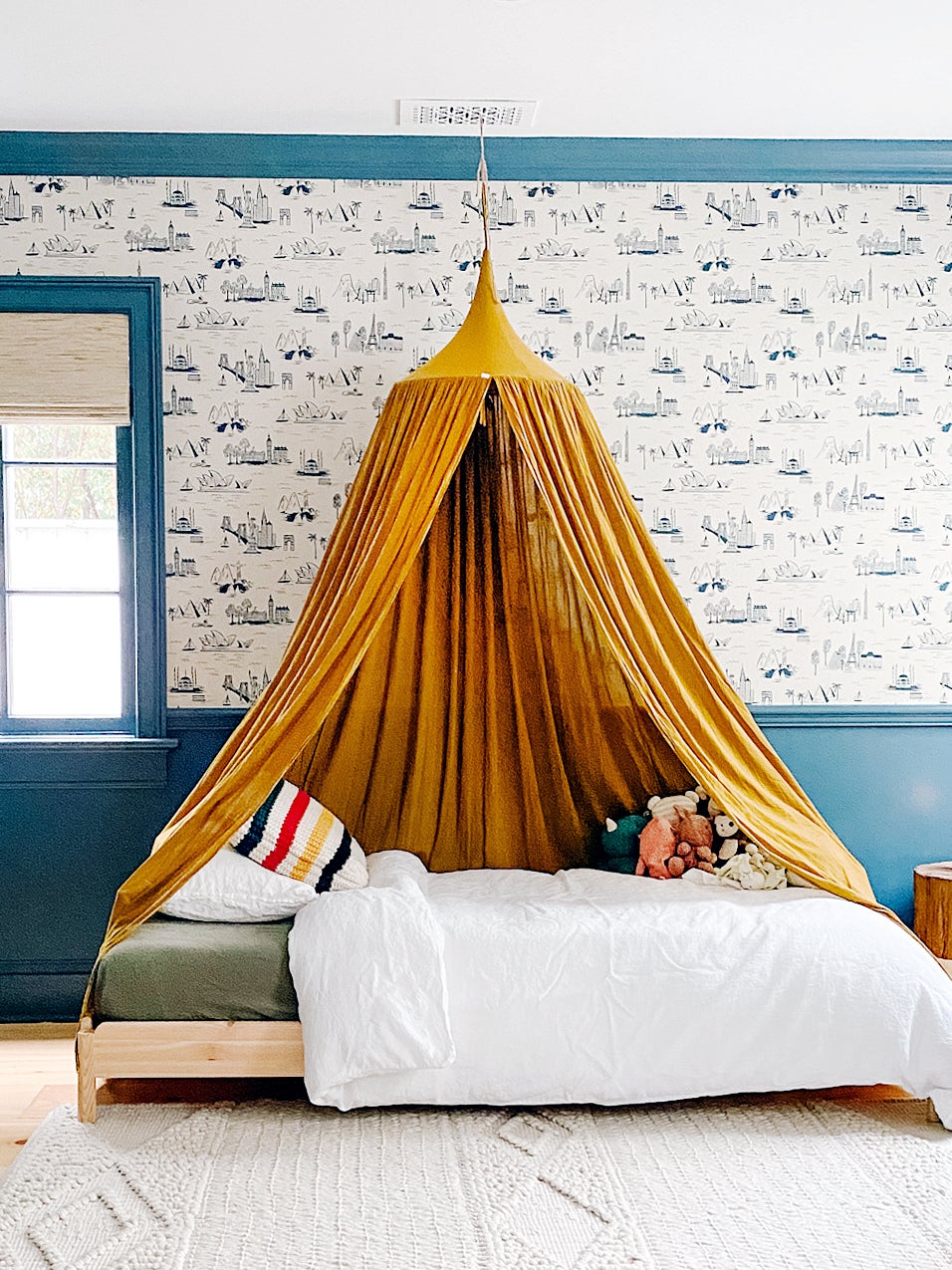 Photography and design by Haley Weidenbaum

Haley and Adam Weidenbaum painstakingly searched high and low for the nursery wallpaper in their first house, so they knew it would also go up in their then 18-month-old son Judd’s room when they moved into their new Los Angeles home. But save for finding the perfect paint to match the trim (Benjamin Moore’s Midnight Hour) and installing blackout shades—the Weidenbaums are the founders of Everhem, an online custom window treatment startup—they kept every piece of furniture the same.

Redecorating from scratch felt purposeless at the time; they knew a transition to a big boy’s room was imminent. When the moment finally came, a year later, they once again salvaged as many items as possible—a Serena & Lily rug, an RH dresser that once doubled as a changing table, a blue velvet glider, and a library cart from Schoolhouse Electric—all in all saving them close to $4,000, but added a whimsical twist: “We fell in love with the idea of making it feel like the set of a Wes Anderson film,” remembers Haley, who loves the playful but sophisticated vibe of classics like Moonrise Kingdom. Here’s how they transformed the space for $1,000.

Hunting for the Perfect Frame

The one big upgrade: a toddler bed. When the Weidenbaums purchased Judd’s crib back in 2016, Haley had an affinity for dark woods like American walnut. But this room’s darker moldings called for a lighter finish to balance them out. Her top priority was to make sure the mattress was low to the ground so the transition would feel smoother for her son. She found the ideal option at IKEA:  “It actually comes with a second stackable frame that can support another mattress,” she says. “We’re saving that for when he’s old enough for sleepovers.”

Finding One Solution That Fits All

Haley originally placed the headboard against the wall, which left both sides open. This posed two problems. First, it divided the room into two awkwardly small areas. Second, their 3-year-old kept falling out of bed and waking himself up. But the couple didn’t like how it looked along the wall. “It was a better use of the space, but it just appeared very bland and haphazard,” says Haley. They needed something to anchor it.

A mustard yellow canopy swooped in and saved the day. “It frames the sleeping nook and makes it feel grand. It’s a beautiful focal point rather than a sore thumb,” explains Haley. She stumbled upon the fabric a few years ago when traveling in Amsterdam: “I stopped into a little boutique called Archive Store along the canals and saw it hanging above a bed.” Luckily, it was still in stock when she was redecorating and the store was willing to ship to the U.S. When it arrived, the couple simply tied the top to a vent grate with some twine. Bonus: “It actually helps diffuse the air so it doesn’t blow directly on him,” says Haley.

To fill up the wall above the dresser, the couple hung a pennant they had kept from their wedding in Ojai. “We always wanted to incorporate it into Judd’s nursery, but by itself it really wasn’t substantial enough,” remembers Haley. One day, Adam came across Oxford Pennant on Instagram and decided to add a few designs to their collection. It was just the right finishing touch to tie together the transportive scouting camp vibe the couple was looking for.