That Unused Area Under the Stairs? This Mom Turned It Into an Interactive Play Space 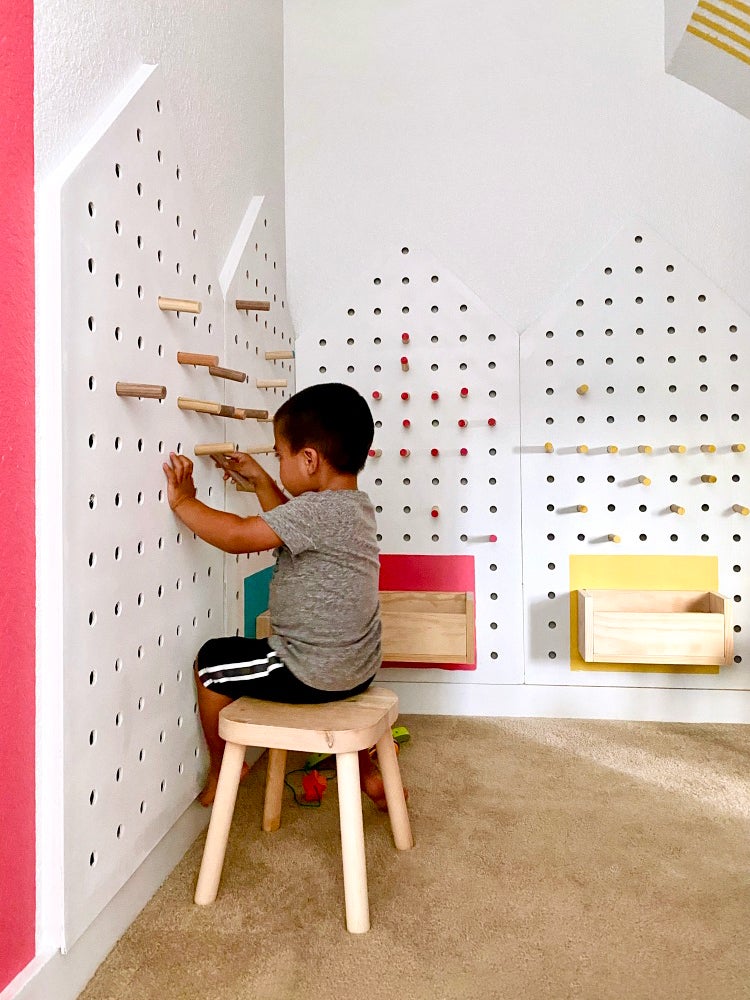 Courtesy of House of Esperanza

Suitcases, holiday decor: These are the types of things you typically find in under-stair cupboards. But not in the Chavez household; it’s a secret clubhouse just for the kids. Monica Chavez, the home blogger behind House of Esperanza, tackled the project when she was nine months pregnant with her daughter, Essie (now 3 months old), to be a refuge for her 2-year-old son, Mauricio, to go to read, make puzzles, and play with his toy cars.

“Making things is very much my therapy,” says Chavez, who lost her firstborn child in 2007 when he was a toddler. She picked up DIY skills afterward as a way to channel her grief. “I really throw myself into doing things to give them their own world. I wanted to create a clubhouse for our kids while they’re little,” she explains.

Chavez got the idea while visiting friends in Denver. “We were eating at a restaurant that had a corner for kids with a cutout in the wall,” she remembers. “I thought to myself: How can I do this in my own house?” The answer was underneath the staircase, so as soon as she got home, she cleared out the area and got to work. In just two weeks, Chavez and her husband had transformed the previously unused nook into a kaleidoscopic play space (and did it all for under $500). Here’s how they got it done.

Because the space was windowless, Chavez wanted to liven up the walls, but the murals she created were very intentional. “My second son was born prematurely,” she says. “So I spent a lot of time in the NICU diving into the research of how I could help him not fall behind.” One finding that stuck with her: Black and white stripes are excellent for brain development. Using that as a starting point, she picked a vivid palette of primary reds, yellows, and blues, and played with circular shapes to break up the straight lines. Using simple Frog Tape, she laid out the design before painting. “It was pretty easy,” she says. “I just had to sit on a stool where the ceiling slopes to finish the lower end.”

The corner space was quite narrow, so Chavez knew she wanted to make the most of the wall surface. After seeing interactive pegboard installations in a children’s museum, she decided to re-create the idea with a few sheets of plywood from the hardware store. “My son has a mechanical brain, and he likes to put things together and take them apart, so I knew that this would be right up his alley,” she says, noting that the activity was also good for motor skills.

Chavez and her husband cut the holes in the boards using a power drill and a hole saw bit and made roof peaks with a jigsaw. She also created color-coordinated wood boxes for the kids to put the pegs back in place and mounted everything to the wall, leaving a gap where the pegs would push through. To make the pegs, the couple cut dowels down to 3-inch pieces. “There was a lot of tedious cutting and drilling,” says Chavez, “but it was totally worth it.”

Make the Most of Low Ceilings

In the back where ceiling height is at its lowest, Chavez added cozy pillows for a reading nook. She hung an IKEA shelf to hold her son’s favorite books and installed motion-activated ceilings lights. “When he crawls in, the lights come on, and he can grab a book and have some quiet time,” she says.

Next to the nook, the DIY pro made a toy car garage out of PVC pipes. “I had seen something similar that somebody had put together to fit toys, and it was a massive installation,” she says. Chavez scaled down the design to fit her son’s collection of tiny vehicles and glued it all together before fixing it to the wall.

The project paid off: Even though Mauricio uses the clubhouse the most, Chavez also occasionally peeks in with her daughter. “I’ve got a little rocking chair where she can lay and look up at the mural. And that was the point—so my kids can spend time in there together.”