How this designer mom reimagined the retro architecture. 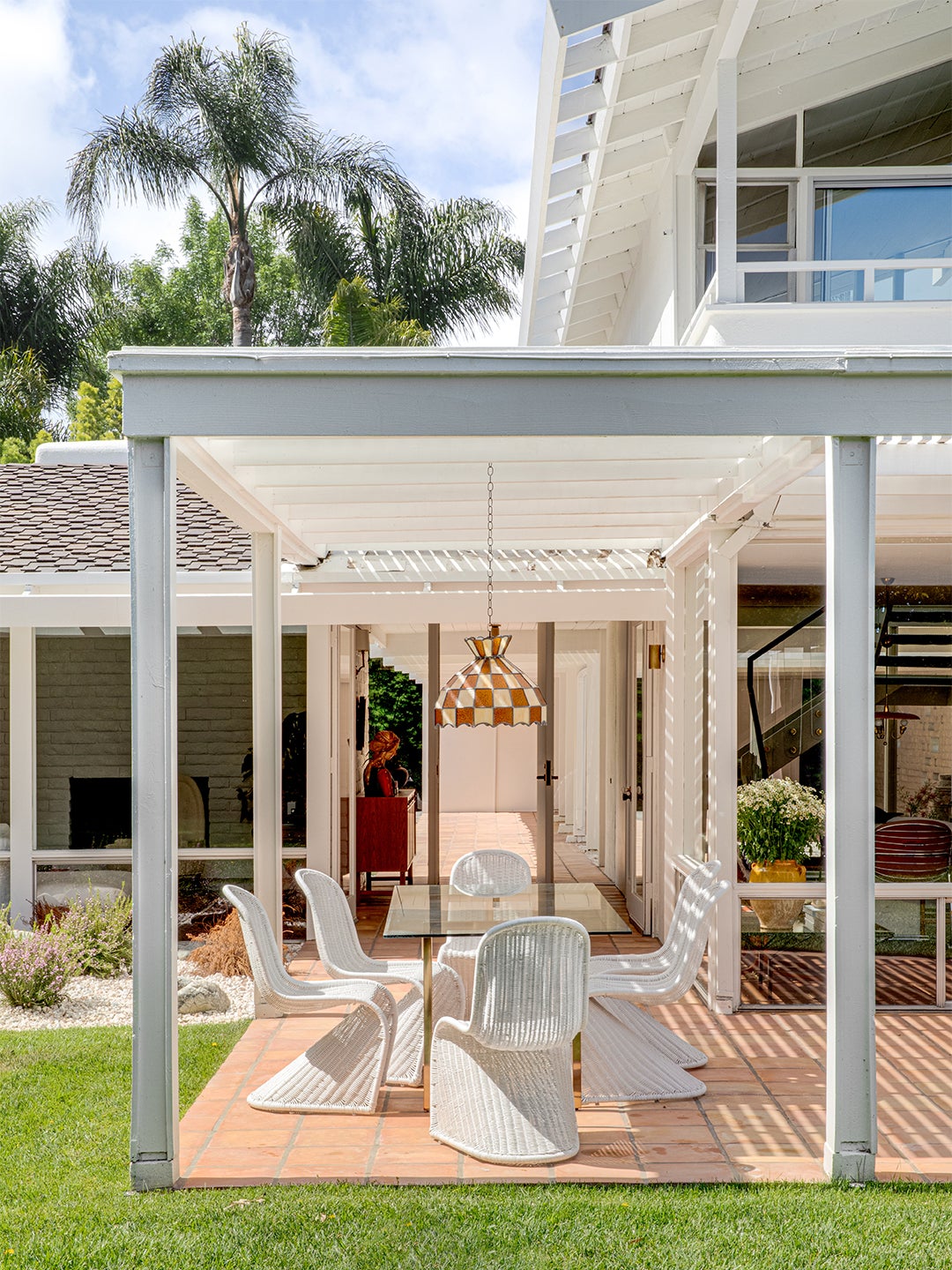 Shannon McLaren, the owner of Prairie Interiors, spent three years courting her Newport Beach, California, neighbor, leaving letters in her mailbox telling her how much she admired her home. “I just loved the bones of it,” she says. The circa-1960 house has windows and character galore, and it sits on a half-acre lot surrounded by 20-foot trees, so it is also incredibly private. As it turned out, the friendly correspondence paid off in 2019, when her neighbor said the place was for sale and was McLaren’s if she wanted it. “It had been a long time coming,” says the designer.

The timing couldn’t have been better: McLaren wrapped construction and moved into the home with her 8-year-old and 2-year-old sons right after the first shutdown, around the same time she was going through a divorce. “As a newly single mom, I thought, how do I heal in this house when society and my personal life are crazy?” she recalls. “The design became extremely personal.”

McLaren decided to keep the furniture simple, classic, and clean, allowing the bones she loved from the very beginning to be the star. “Usually in my job, I’m adding cool architecture to boring houses,” she says. “I had to kind of pare down, which was great.” The bedrooms were the only place she decided to hang window treatments, not wanting to disrupt the view of all the greenery outside.

In her incense-filled, TV-less living room (the space she considered her zen retreat right after the move-in), McLaren opted for a streamlined white sofa by Italian designer Giorgio Soressi. “I bought a mid-century house, but I wanted it to feel more European mid-century rather than American-kitschy mid-century,” she explains.

While the living space went largely untouched, basically everywhere else McLaren had her work cut out for her: She made the kitchen bigger and connected it to the dining space; moved the main bedroom from the second floor to the ground level so it would open up via sliding doors to what she calls the zen garden; and carved out a closet–slash–bathroom suite to call her own.

“I bought a mid-century house, but I wanted it to feel more European mid-century rather than American-kitschy mid-century.”

The designer also had to start from scratch in the entryway (the previous floating stairs weren’t up to code and definitely not toddler-friendly), but not wanting to lose the airy effect, she opted for a new design that pays homage to the original setup. “I really liked the openness, so I thought: glass!” she says. Topping the thick see-through spindles with a custom walnut railing was a pricey engineering feat, but it was worth it in the end, especially when she had the stairs wrapped in peppy green Missoni carpeting.

McLaren took on the same mindset when redesigning the kitchen. Even though it was new, she wanted it to feel like it was always there. “Back in the day, kitchens weren’t for show like we see now,” she says of her decision to avoid overly fancy features. She limited the neutral brick-toned backsplash tiles to one spot and prioritized an island that could hold everything from cookbooks to kids’ clutter behind grooved doors.

Not wanting the space to feel too overwhelmed with cabinetry and shiny metal appliances, she made a bold move: installing a see-through refrigerator panel. “I don’t care if people see what I buy and eat,” she says. The detail adds dimension to the room and helps bounce around light streaming in from the surrounding windows. The only downside is that her kiddos request snacks a lot more frequently than they used to.

Around the corner, just off of the adjacent breakfast nook–slash–playroom, are her sons’ adjoining bedrooms—a setup that works for the parts of the week that they’re with their mom. “So far there hasn’t been a conflict as far as sleeping goes,” she says. While she usually isn’t one for wall-to-wall carpeting, a dark patterned option works wonders in a kid’s space (it helps hide small messes, crumbs and spills). 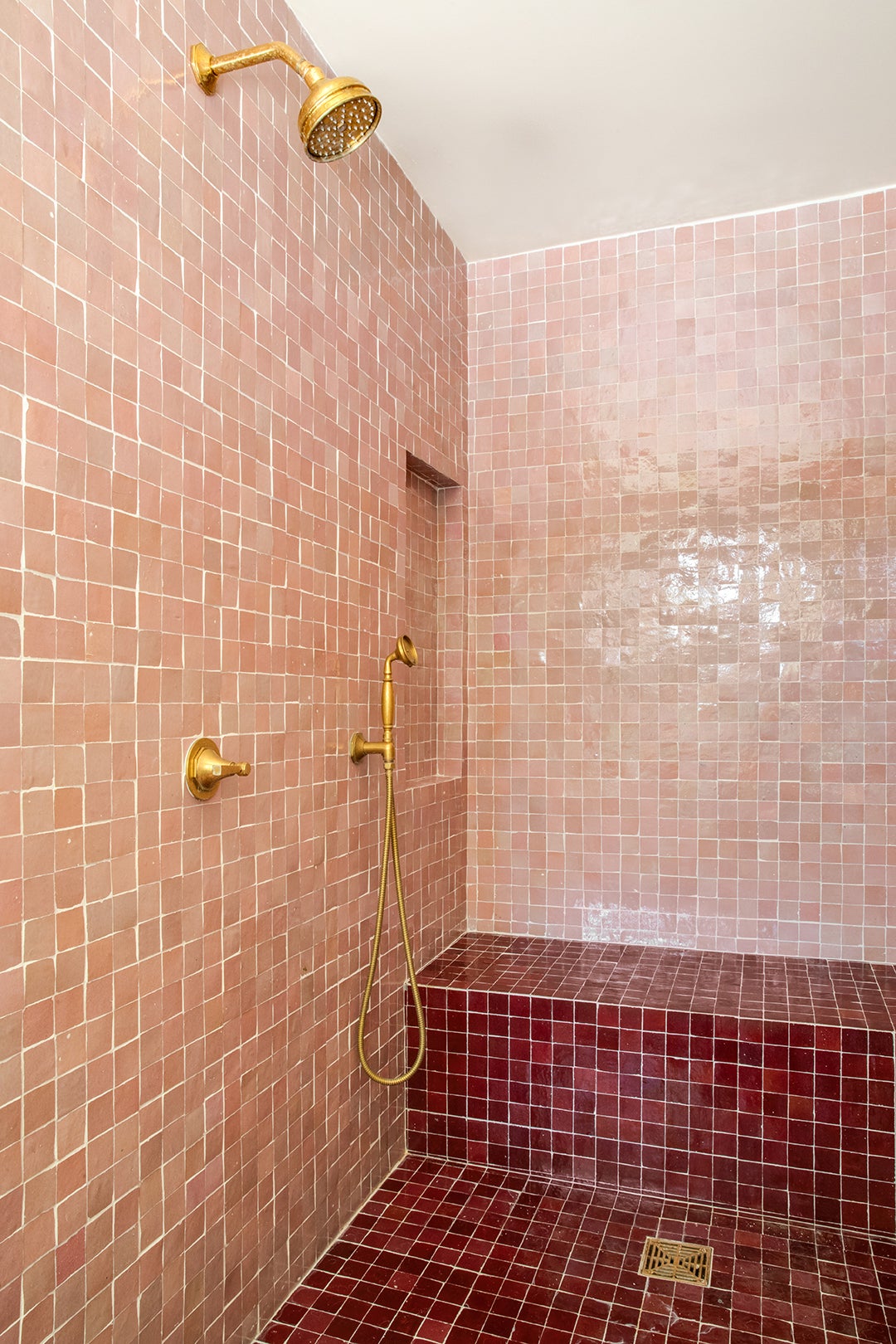 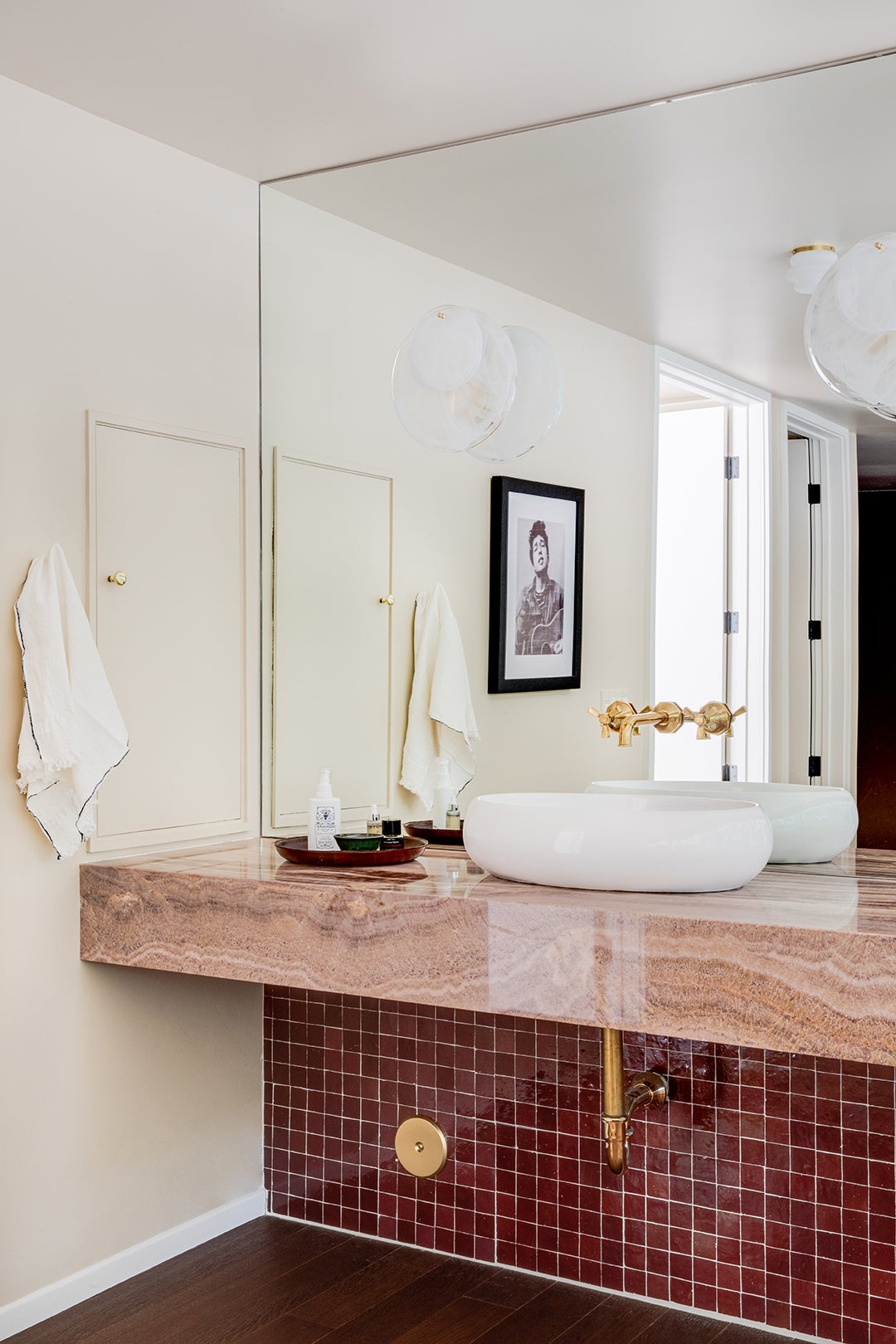 In her en suite, McLaren combined all her dream features—freestanding tub, pink onyx sink, and all—into one open-concept floor plan. The two-tone shower tiles were a happy accident, though. Originally the plan was to cover the walls in white zellige, but when Mosaic House, the company she was sourcing from, told her the tiles were delayed but they had pink in stock, she went with it. “I thought, hey, I’m living here by myself now, why not have a pink shower?” she says. 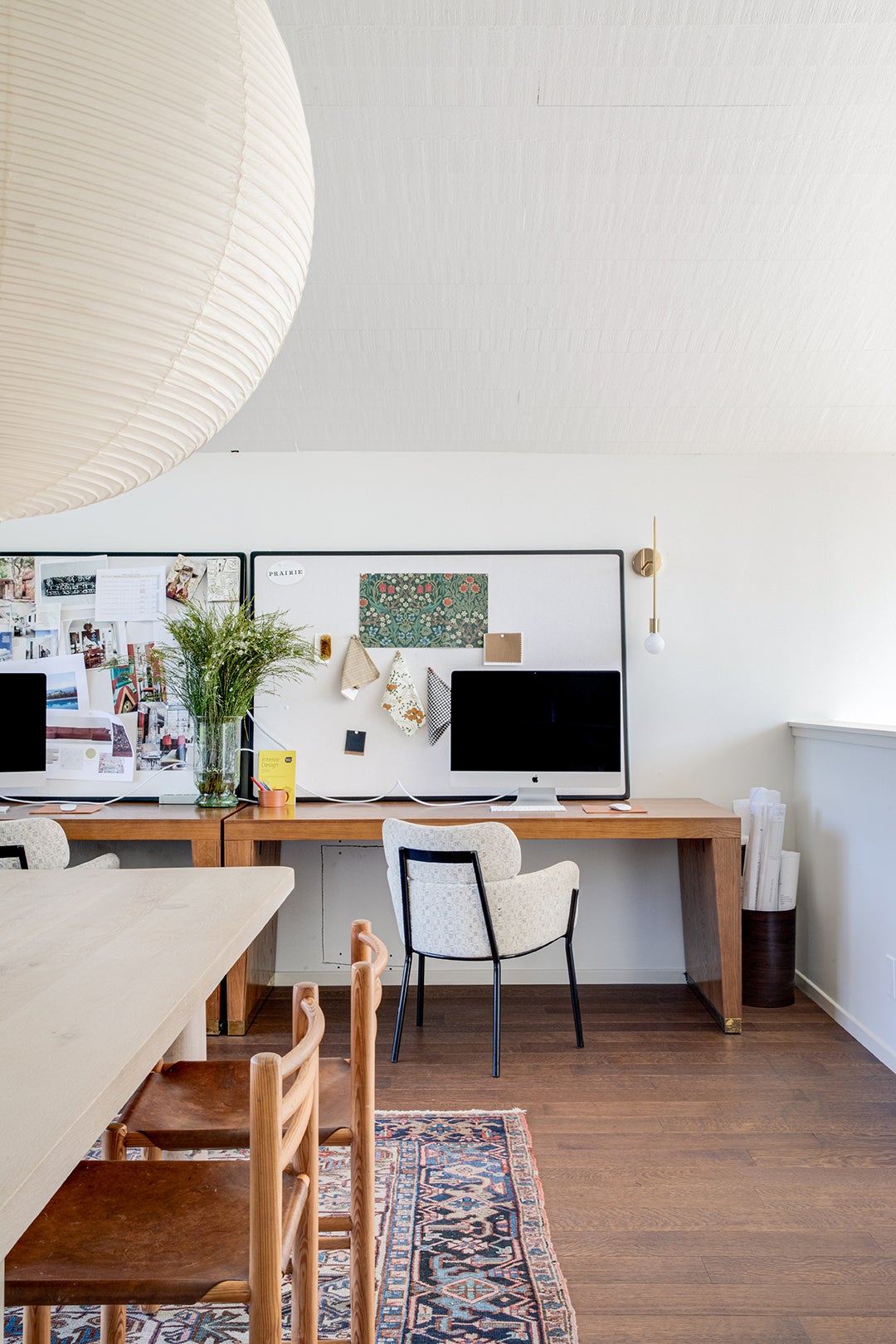 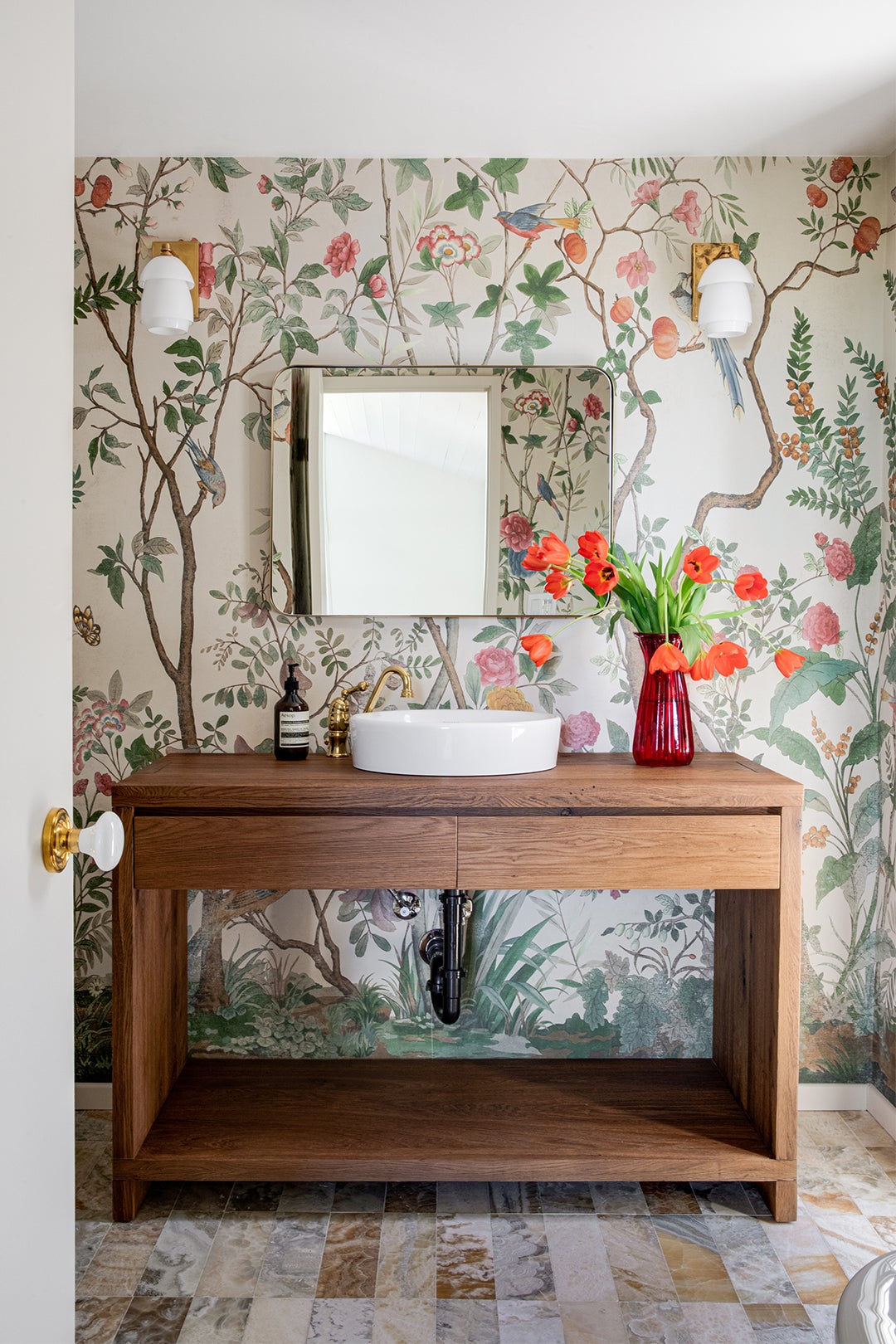 She kept the playfulness going in her office bathroom upstairs with Gucci floral wallpaper and onyx floor tiles, which were a surprising save at around $1.99 per square foot from Floor and Decor. “It was kind of a blessing that I had this big, open loft area,” says McLaren. With many of her clients not wanting to visit her main office building during the pandemic, she set up shop at home with her two employees and intern. “I’m not really crazy about the energy, but I do think this house feels good,” says the designer. “And having everything represent me and my family, it felt more meaningful this time.”