And plenty of repurposed furniture. 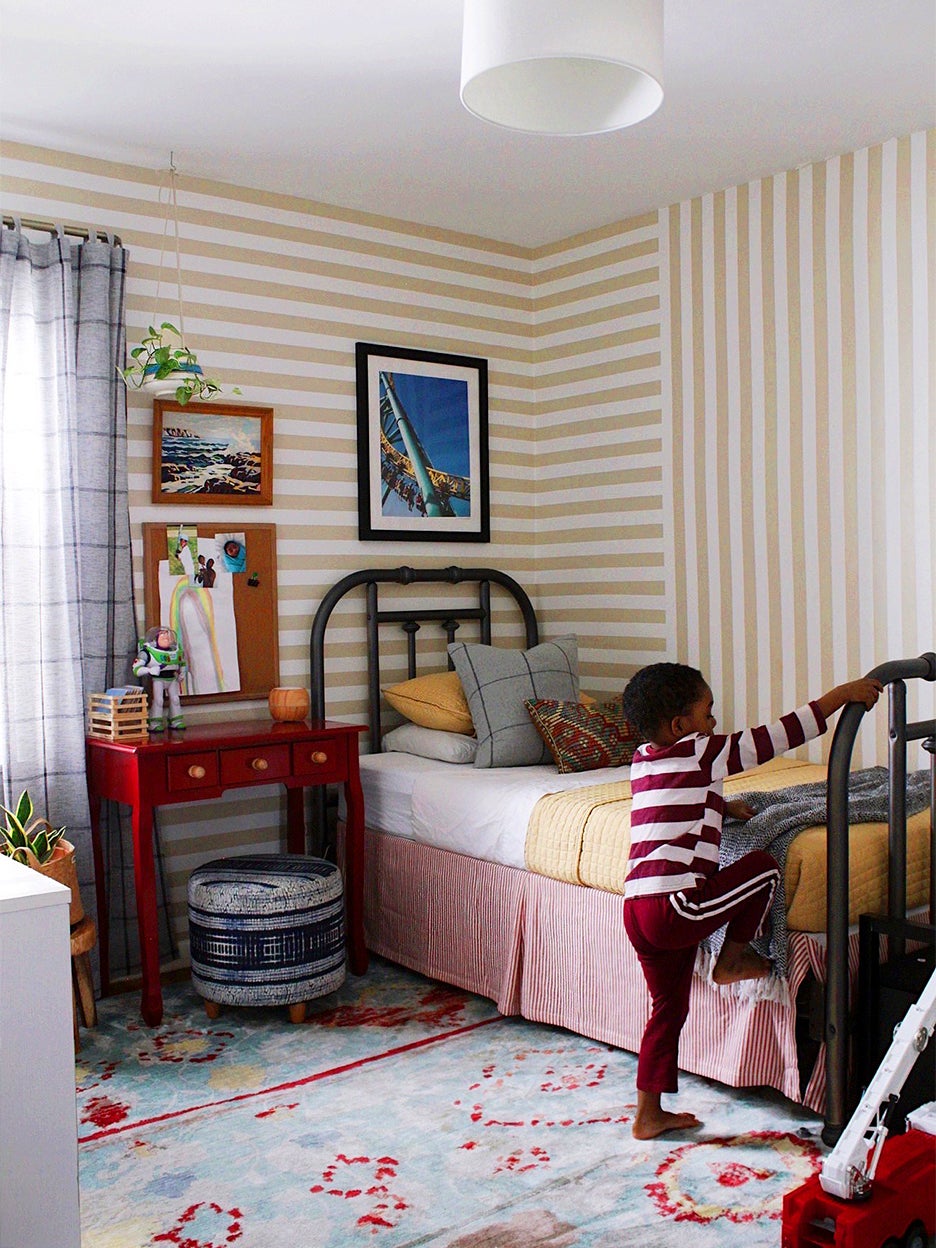 When Tanieka Harris of This Borrowed Home moved her family into their Cleveland rental in February of 2019, she knew that she wanted to design a space that her previous home was missing: a room for her then 3-year-old son that felt tailor-made for him. “I had all these ideas,” she says. “I worked slowly and tried to live with the space for a little while, allowing it to tell us what it needed.” She started designing the room around October, and spent the following three months developing it bit by bit, whenever she had time after work or on weekends.

Once she came upon Sarah Sherman Samuel’s design for her daughter Clover’s nursery, she knew she had her starting point: stripes. Since she lives in a rental, she was wary of using paint to apply the graphic design to the walls of her son’s room, but she came up with an easy solution. She had previously used electrical tape to add stripes to a wall in her stairwell, but this time she needed something a little sturdier—2-inch gaffer tape, which she applied gradually to the already-beige walls, using a small piece in between each stripe to ensure they stayed even.

For furniture, she got creative. “I kind of shopped my own home,” Harris says, laughing. The striped dresser was previously an all-white one that she had in her room, which she painted beige stripes on using chalk paint to create a camouflage look with the wall, and the desk was her old vanity, painted in her son’s favorite hue: red. Even the hanging ladder on the wall that she uses for storage came from an old piece of furniture. It was one of the sides of her son’s crib. “I pretty much Frankensteined his whole room,” she notes.

What was most important was that the space felt just right for him. “I didn’t make it a place for me,” says Harris. “I made it for him to be able to just do his thing in there.” She knew he liked color, so when she won a vibrant rug in a giveaway from eSale Rugs in muted primary shades, she used it as the basis for the room’s whole palette. And when planning out the gallery wall, she chose pictures that best represented him: a portrait of a young boy getting his hair cut that her son sees himself in, some animal paintings from the Metropolitan Museum of Art’s Open Access collection, and a few playful Lego prints.

Her son, now 4, has a room of his own where he can draw at his red desk, easily grab books off his shelves, and see himself reflected in the mirror placed perfectly at his height. “He was really involved throughout the whole process—anytime I added something new, I’d show him and he’d get so excited,” says Harris. “When he’s in his room, I can definitely feel that he enjoys it.”