Athena Calderone’s design for her son even transforms into a sofa. 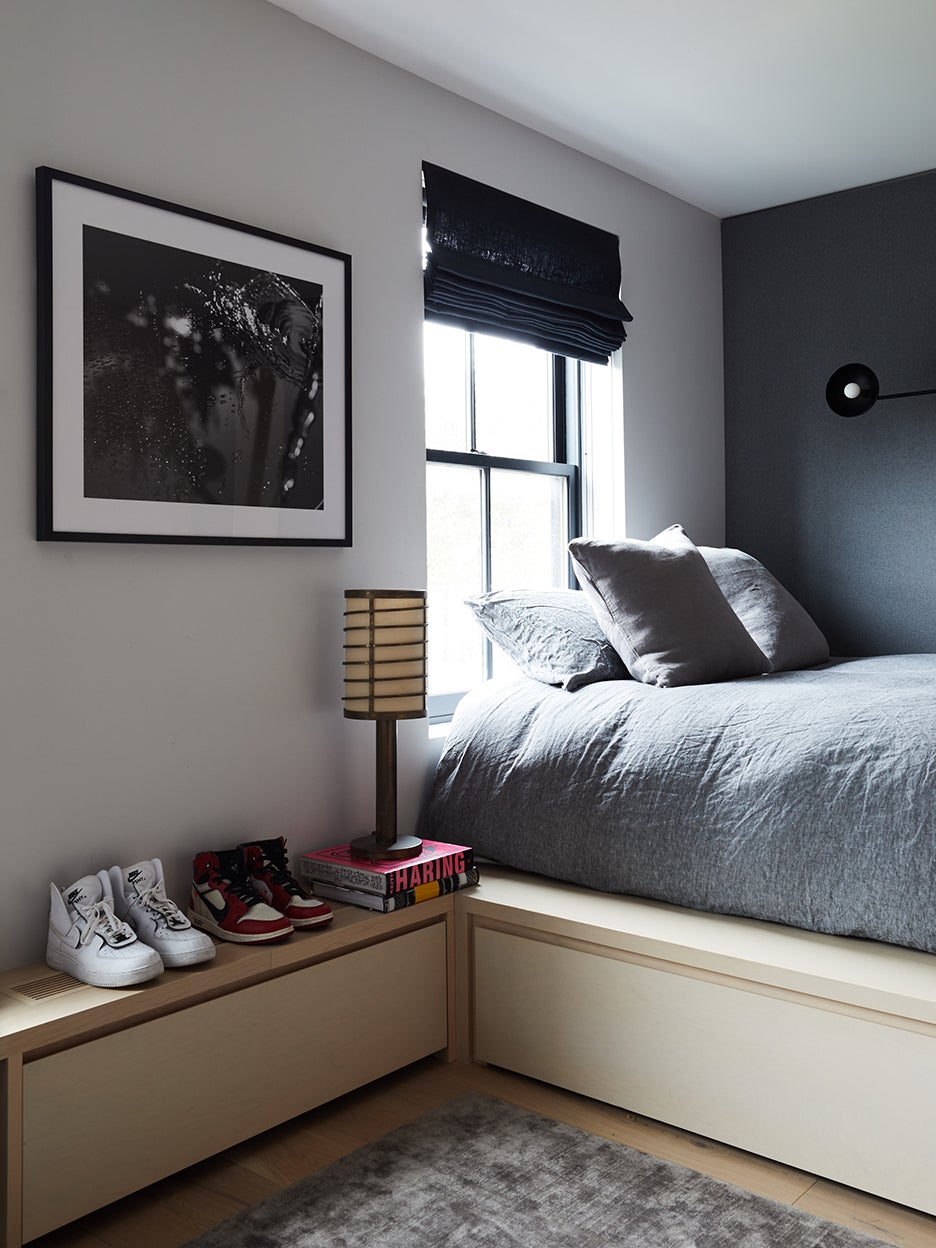 Bunk beds are all well and good when you’re 7, but a cramped twin mattress doesn’t exactly promote slumber when you’re 14 and your feet dangle over the edge. For this reason, upgrading to a queen-size bed was high on Athena Calderone’s teenage son’s priority list when the family moved into their Brooklyn townhouse three years ago. Jivan (now 17) had a modern aesthetic in mind for his room, and his mom was the perfect person to bring it to life. “Because we’ve moved so often, I’ve always been cognizant of making sure he’s able to take ownership of his space,” says Calderone.

Step one: Switch up the layout. When the EyeSwoon founder and her DJ husband, Victor, bought the townhome, it was divided into apartments, meaning Jivan’s space was previously a mishmash of a bathroom and a kitchen. Once the new walls were up, Calderone focused on carving out room for a homework station, for friends to kick back, and, of course, for Jivan’s ever-growing sneaker collection. Here, she takes us behind the scenes of the elevated design.

A second bed was key to making Jivan’s space sleepover-friendly—but it had to be discreet. “I stumbled across an image of a platform bed, and it led me to this very Scandinavian raw-wood vibe,” recalls Calderone. A twin trundle is situated underneath the raised landing, and there’s integrated storage around every corner. One wall is clad in closets with hanging space for clothes and shelving nooks for extra bedding, while the other side features drawers and cubbies for Jivan’s shoes. Across from the bed, there’s a built-in desk, made out of the same inexpensive pine plywood that covers the room. Bulkier items like luggage are stowed away in hidden compartments underneath the platform’s steps.

“My son and I, we’re not the most organized people,” Calderone admits. Her thinking: The more designated storage nooks there are, the more likely the space will stay clean. She even made sure there are hooks everywhere so towels don’t get thrown on the floor.

Calderone stuck with classic finishes in Jivan’s bathroom (a space that’s also used by visiting guests). The square matte subway tiles were a Home Depot score, but to make the slabs feel luxe, she opted for a thick black grout. “It adds a graphic punch,” she says. The round mirror (a Target find) softens up the hard edges.

Likewise in the bedroom, Calderone swathed the back wall in padding and had the panels upholstered in a felted-wool fabric to bring in a textured element. When friends come over on the weekend to play video games, they can lean back against the cushy surface (it also adds another layer of soundproofing). “I knew kids would be hanging out on the edge of the platform and treating the bed more like a sofa,” she says. The only tricky part about installing the feature was getting all the cuts for the electrical outlets and the powder-coated wall sconce exactly right (Calderone didn’t want any do-overs).

Second to having a queen-size bed, Jivan’s only other major request was light-blocking window treatments—preferably black. The two came to a compromise: Calderone installed charcoal gray linen roman shades, but added secondary rollers behind them so her son can turn the room into a full-on cocoon when he pleases.

The lone piece of artwork hanging on the wall is by none other than Jivan himself. (He took the photograph for a class, and as a surprise for him, Calderone had it blown up and framed.) “It’s dope,” says Jivan of the finished look. “It was definitely designed with my point of view in mind.”