In a Full Circle Moment, This Artsy Teen’s New Room Was Inspired By Her Nursery

A $400 window seat–turned–desk anchors the space. 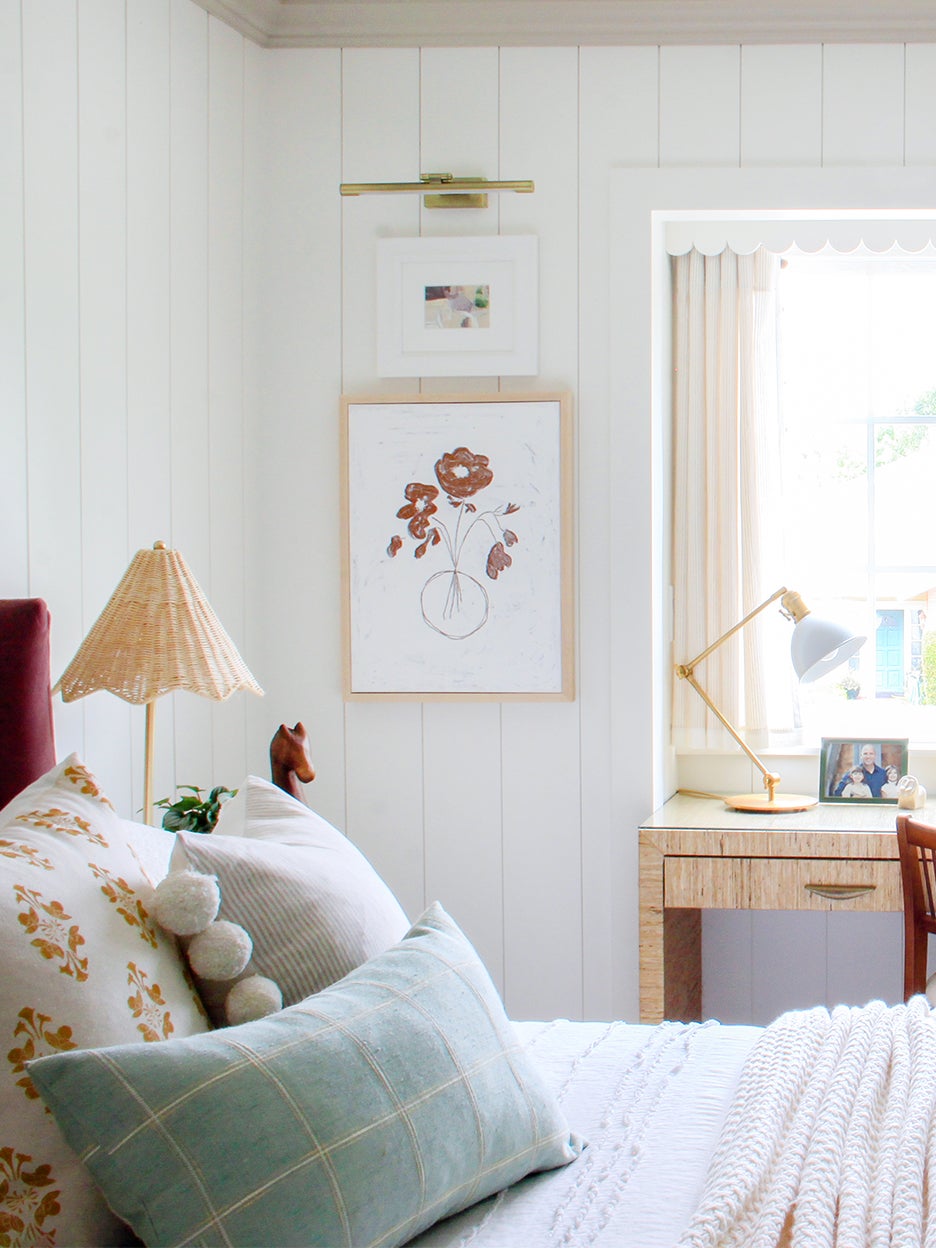 Marynn Udvarhelyi’s love affair with DIY interior design (the focus of her blog, Wildflower Home) began when she meticulously curated a pastel-palooza of a nursery ahead of her eldest daughter Hannah’s birth in 2005. Cut to last March, and Udvarhelyi once again found herself crafting a room for her now theater-loving, spunky 14-year-old. The goal this go-round? Smooth Hannah’s transition to (remote) high school by transforming her bare, gray bedroom in the family’s new Temecula, California, home into a welcoming retreat.

With Hannah playing the role of apprentice, the pair first tackled a series of thoughtful structural interventions. Together they replaced the room’s cutesy beadboard with top-to-toe shiplap (a reminder of family vacations to Monterey) and crowned the perimeter with molding, before mounting wallpaper to the ceiling and fashioning a grasscloth desk out of an unused window seat. (More on that later.)

For the final touch, Udvarhelyi worked with a palette pulled from the room that started it all, the nursery—dialing up the saturation and sophistication to teen-ify the colors. Pastel purple was swapped out for eggplant in the form of a velvet headboard; mint green was replaced by a rich pine in the dresser; and butter yellow gave way to popular scene-stealer Sherwin-Williams’s Accessible Beige on the trim.

The three-month-long project may have started out as a simple makeover, but Udvarhelyi says it quickly came to symbolize much more: “Hannah and I knew this was the last bedroom I’d design for her while she was under our roof. We didn’t want it to end.” Here’s how the duo made the most of their encore collaboration.

Spruce Up the Base Layer

“I don’t believe in letting anything stand in the way of my vision for a space,” says Udvarhelyi—blah beige carpet included. Since there wasn’t room in the project’s $2,000 budget to replace the lackluster accent, she helped it blend in by painting the trim and door to match and layering on a textural rug in complementary hues. Bonus: The Home Goods find balances out the sweeping wallpaper above.

As a mom of two (younger daughter Noelle is 11), Udvarhelyi knows that little spills and messes happen on the daily. “Even retainers can damage things like nightstands,” she says, laughing. To keep Hannah’s room looking new, she tracked down a suite of Chippendale-style bedside tables with lacquered—read: Formica—tops, a durable finish that can withstand teenager-dom. The desk is topped with glass for that same reason.

Window seats are great for daydreamers, but Hannah is a doer, with Zoom rehearsals to attend and lines to memorize. To help the nook work as hard as her daughter, Udvarhelyi commissioned a custom $400 desk from a carpenter friend to take its place. She then covered the hole where the seat once was in leftover shiplap and a carpet remnant. Next: “I wrapped the desk in grasscloth, which Hannah says reminds her of the African plains and her recent role of Pumbaa in The Lion King,” adds Udvarhelyi. Plus the desk’s tailored fit keeps school supplies from rolling off and papers looking tidy—something every teen can use extra help with.

Leave a Little Room to Improvise

Every choice Udvarhelyi made in the bedroom was meticulously planned, except for the bulletin board. Once she’d made it, the DIYer handed over full control to Hannah to cover it to her heart’s content with playbills, ticket stubs, cast photos, and more memorabilia. “Every teen’s room should have a pinboard full of memories,” says Udvarhelyi.

Above it all, a playful sparrow print from Rylee + Cru livens up the ceiling. Aligning the edges of each strip of paper was particularly tricky, given that Udvarhelyi was working overhead. Enter: Spackle. Once the wallpaper was hung, she gingerly dabbed it on to fill in any open seams, let it set, then carefully sanded off the excess. Of the pattern, Udvarhelyi says, “I picked it because I was letting Hannah spread her wings and fly off to high school.” You’d be hard-pressed to find a more fitting choice.