A bold print for a multipurpose room. 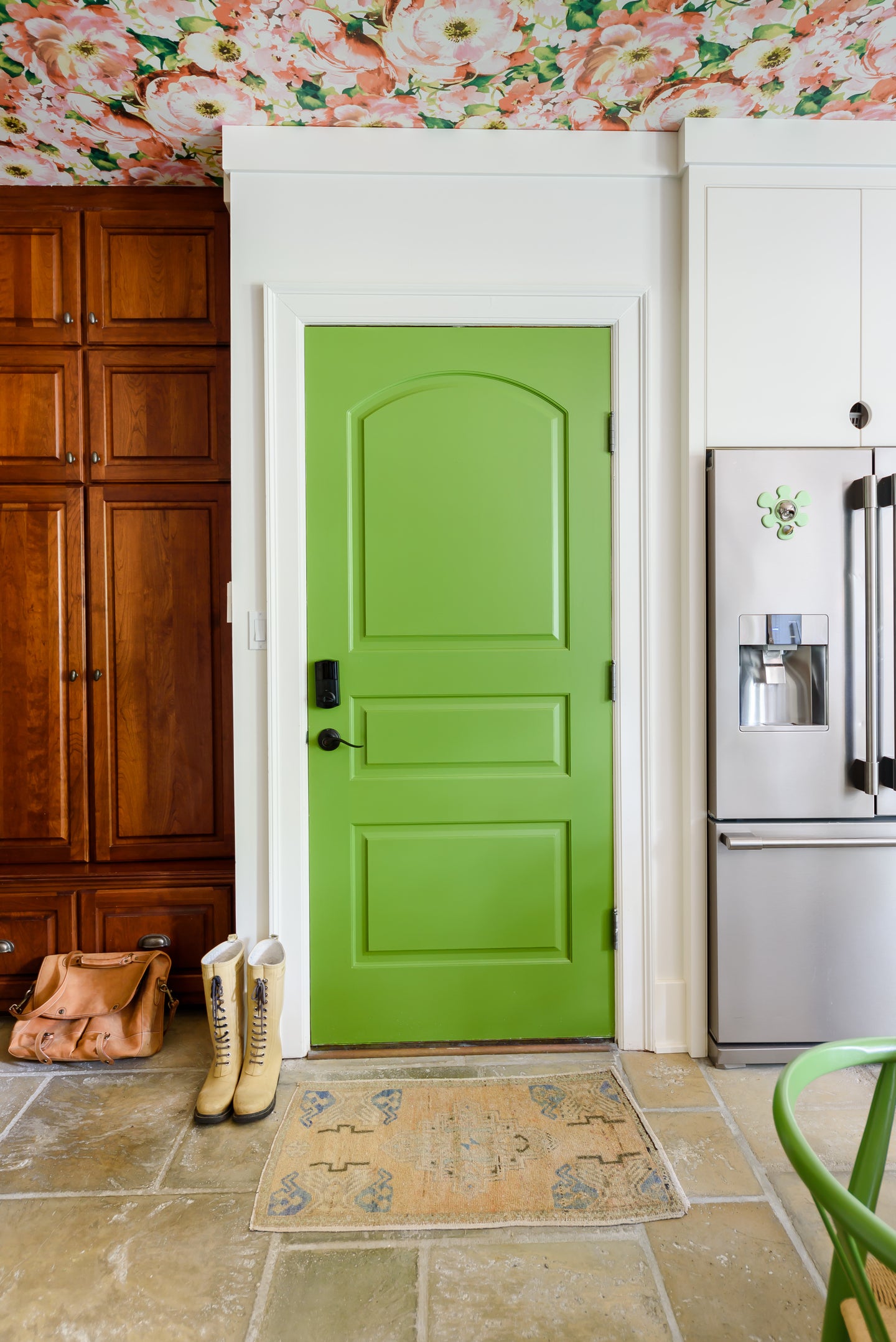 One look at Sadhna Williams’s do-it-all work space and you’ll instantly feel more productive. “I wanted it to be a beautiful workhorse,” says the Nashville-based designer. “Its function was a top priority, but it needed to look good while it was functioning.”

A true jack-of-all-trades, Williams’s space is everything at once: a laundry room, mudroom, pantry, craft room, gardening station, and showroom. You’d almost never know that three walls once stood where a punchy print now presides.

“I love the outdoors and gardening, so my jumping-off point was the floral wallpaper on the ceiling,” says Williams.

After moving some plumbing around and adding custom cabinetry to the periphery of the now-open-concept room, Williams got down to organizing. Ahead, the designer opens up about perfecting her personal paradise and the dos and don’ts of a do-it-all room.

Do: Figure out your needs before building out storage

Before bringing on a local carpenter to build out the shelving and cabinetry, Williams established her storage needs by asking herself the hard questions: What will look good on open shelves? Where is a good place to hide tape? How much gift wrap do I actually own?

For home office papers (bills, certificates, receipts), Williams carved out room for file storage. Large cabinet doors, on the other hand, allow her to cleverly hide the washer, dryer, and small ironing board.

Don’t: Go overboard with wallpaper in a busy room

A busy print for a busy space might seem like a recipe for sensory overload, but because Williams chose her print—and placement—wisely, the bold pink-and-green floral reads as soothing. “It’s a bright, happy pattern, and I put it on the ceiling because I knew it would get crazy busy with all the other stuff I wanted to organize,” she explains.

Subtle hints of the print can be found in touches of green peppered about the space. Note the wishbone chairs and painted door. The playful hue pops against the all-white cabinetry and walls without going overboard.

Do: Display the things you love the most

There’s little point to surrounding yourself with things you love and cherish if they’re going to collect dust behind closed cabinet doors. A lover of open shelving, Williams wanted to use her exposed storage space as an opportunity to show off her favorite servingware. Her display works because it’s cohesive, but also because she has the numbers to back it up.

“My husband does woodworking as a hobby—walnut and marble are his two favorites—so he gifts me cake stands that he’s made. I probably have 15 of them,” shares Williams. “I love open shelving, but open shelving also needs to look good.”

A magnetic bulletin board (also made by her husband) serves as a landing pad for inspiration as well as invitations. Less aesthetically pleasing accessories and tools—think: glue guns, hooks, and tape—have found happy homes in galvanized buckets and out-of-sight drawers.

Don’t: Have hardware just because you think you need it

“I purposefully did not use hardware,” reveals Williams. While you’d think a few knobs and pulls here and there would have little visual impact on a room, sometimes the smallest details make the biggest difference—especially if there’s already a lot going on.

“I asked [our carpenter] to do cutouts so I wouldn’t have any other distractions and so that the space would feel timeless,” she continues. Instead, her focus is the wallpaper. Everything else fades into the background.

Do: Fake your own backsplash

Having already landed on a loud floral wallpaper for the ceiling, Williams wasn’t about to bring a rival tile into the mix. The ample amount of blank wall space in the kitchen area would prove to serve a more functional purpose.

“I have these two big wicker trays and two big galvanized trays that I love to use for outdoor entertaining, but they’re hard to store,” says Williams. As the space was coming together, she had a lifesaving idea: She could hang them.

“It’s been the handiest thing,” Williams continues. “When we have people over, I’ll run in and grab it off the wall. It’s so easy to throw things on there for an impromptu party.”

See more stories like this:  This Perfectly Organized Craft Room Is So Pleasing to Look At Gray Malin’s Colorful Office Is Giving Us Major Travel Inspo Tour a Fashion Designer’s Less-Is-More LA Office