Nothing is too precious. 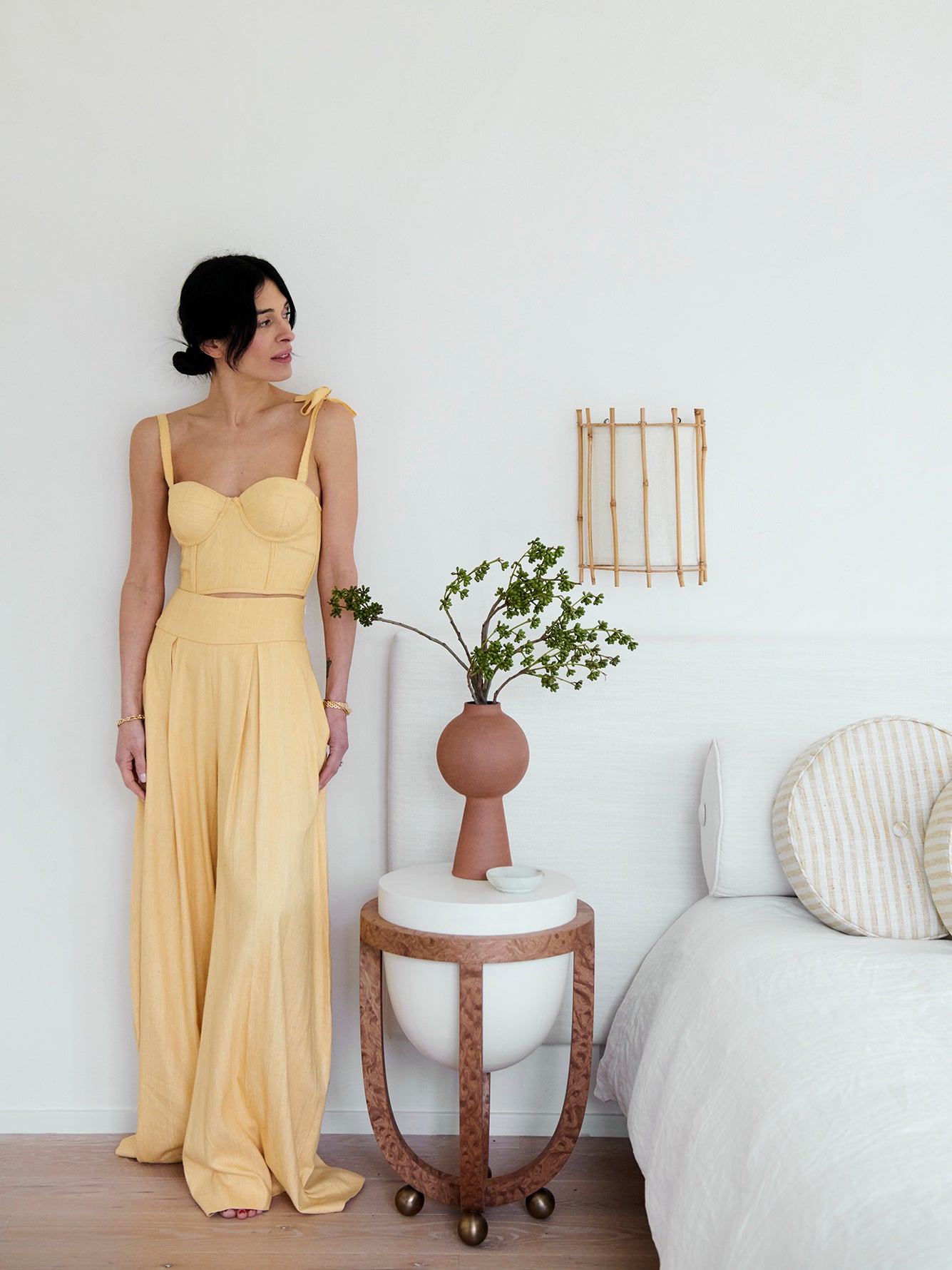 In 2010, Athena Calderone’s Amagansett, New York, bedroom was the epitome of the rustic-meets-beachy aesthetic everyone was going for. The EyeSwoon founder and author of the new book Live Beautiful, out now, leaned into reclaimed wood furniture and industrial antiques, and she wasn’t afraid of a hack either (she painted her IKEA Malm bed black—a DIY she’s still proud of to this day). But things changed: Trends went out of style and Calderone grew as a designer. The space was starting to feel one-note. “It is possible to have too much of one thing,” she says.

So when she decided to update her beach house, Calderone made the master bedroom a top priority. While taking cues from nature and the intricate rope ceiling in the adjacent bathroom, she shopped for mostly vintage pieces that were sculptural and organic. “I wanted it to feel like a retreat, almost like a hotel suite you’d find in Portugal or Mexico,” she says. From breaking the rules of symmetry to finding the perfect rug, Calderone takes us behind the scenes of the refresh.

She Made One Major Tweak

The first and only serious upgrade Calderone made was cladding the white walls in plaster. The textured finish instantly warmed up the clean architecture, but she didn’t stop there. Since the ceiling is lower in the bedroom than in most of the other rooms, the designer went for full-on cocoon vibes and coated that surface, as well. Everything else in the room is something Calderone can take with her if she ever chooses to sell the house. “I didn’t spend a fortune on a renovation,” she notes.

“I didn’t spend a fortune on a renovation.”

She Paired Down Strong Shapes With a Neutral Palette

Beni’s Boxes rug was Calderone’s first point of inspiration for the decor. The large, irregular rectangles definitely make a statement, but the brick red and rust orange tones aren’t overpowering. The piece instantly reminded her of the rope in the bathroom, which leaves a graphic shadow in the morning when the sun rises. “I always like to think about what’s happening in the next room,” says Calderone. The pinstriped accent pillows further echo the lines.

She Didn’t Toss Much

None of the furniture that was originally in the bedroom went to waste—Calderone sold most of it in a yard sale. As for the swaps she made, she primarily stuck to vintage items like the French wall sconces, the travertine side table, and the curvy Italian chair from the ’60s in the corner.

She Didn’t Give Up on Finding the Perfect Anchor

Calderone’s idea for the bed frame was simple: an oakwood platform that extended beyond the mattress. But when she sought out a quote for a custom piece, she was given estimates of $10,000. Cue plan B: Etsy. Calderone came across Wilbur Davis Studios, and the workshop tweaked one of its ready-made designs to have a five-inch overhang and cylindrical legs, per Calderone’s vision. “My design philosophy: Be relentless,” she says.

“My design philosophy: Be relentless.”

As for the extra-long headboard mounted on the wall, it’s really just plywood wrapped in foam and covered in outdoor fabric. “People joke, ‘Oh, I guess you don’t drink red wine in there.’ And I’m like, ‘No, I actually do!’” she says, laughing. “Nothing is too precious.”

She Threw Off the Equilibrium

No matter the room, Calderone always likes to start with symmetry…and then she disrupts it. The sconces might be evenly positioned over the headboard, but the artwork is slightly off-center. She also chose dramatically different setups for the nightstands: One is a round drum table from Apparatus, the other arrangement is a block of stone paired with a wood stool. The contrast is so major that it doesn’t look like a mistake. “I never like to do the obvious,” says the designer.