Floral wallpaper and pressed tin can be nautical. 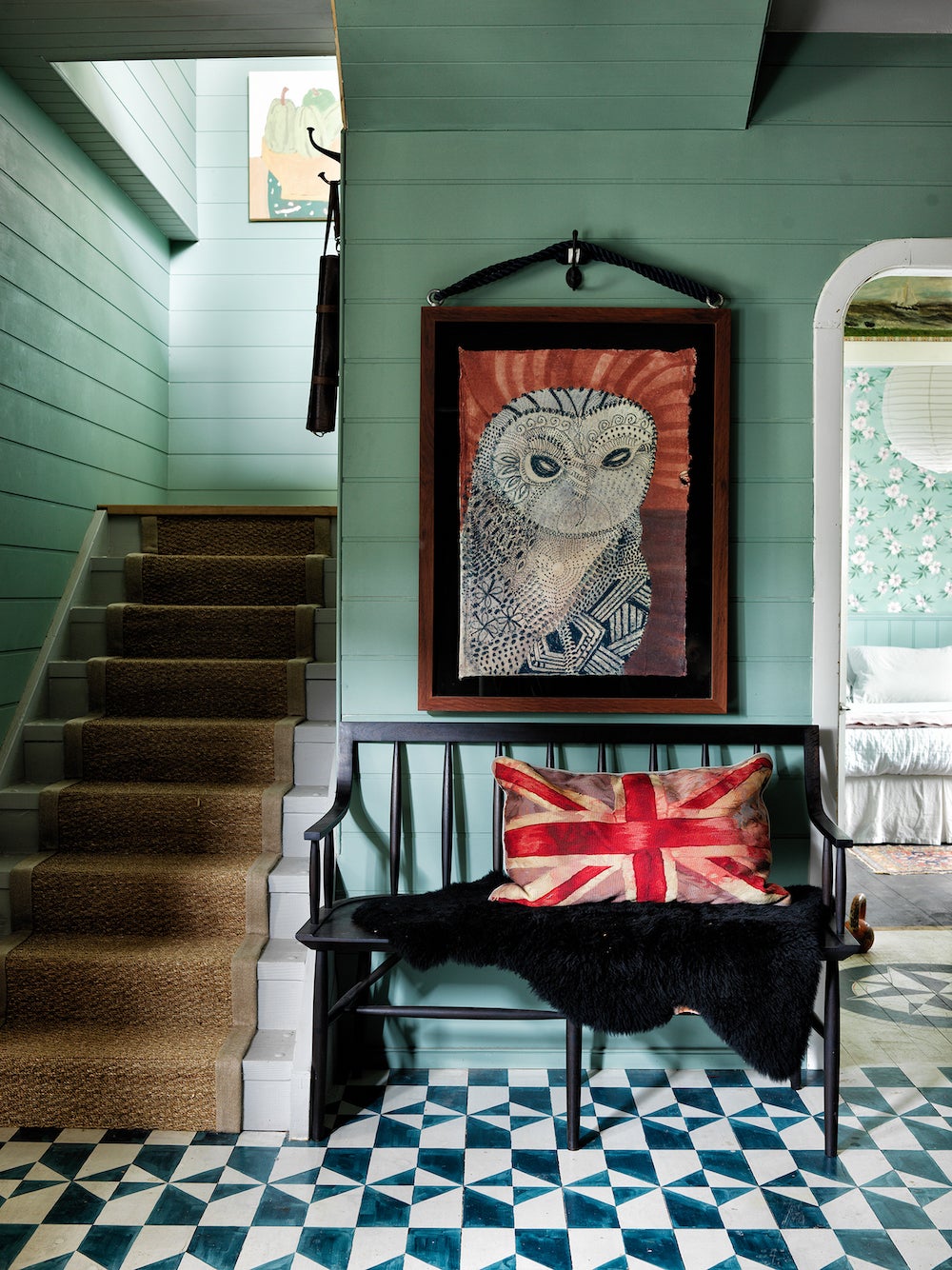 After Nancy Meyers’s film Something’s Gotta Give came out in 2003, Sibella Court noticed a shift in the way her fellow Australians designed seaside homes. “There was this weird phenomenon where everyone wanted what they called a Hamptons house,” she says. In other words, a wave of neutral beachy escapes—dull greige walls, shingled facades, and all—ensued. But when Court, the founder of The Society Inc.—a retail line made up of industrial door knockers, haberdashery scissors, vintage-inspired textiles, and more—her husband, Ben Harper, and their daughter, Silver, sold their Sydney apartment to move to the quiet seaside town of Bundeena (an hour-and-a-half-long drive from her city studio), they traded the typical nautical look for dramatically dark nooks and pressed-tin ceilings. “I have an aversion to white houses,” she says with a laugh.

A sense of nostalgia permeates every room, and that’s on purpose: Court drew inspiration from her grandparents’ lake house in the north of Sydney, where she spent most of her holidays as a child. “My grandma was really creative. She had a lounge room with a chintz sofa and chintz curtains, and she was into aqua,” recalls Court. During one of those visits, the designer watched The Ghost and Mrs. Muir, shot in California’s Stillwater Cove in the 1940s. “I loved the house [in the film], too, because it’s on the beach, but it didn’t have a beach vibe,” she explains. “So I went with the idea that I could do whatever I wanted and it didn’t have to have this sort of nautical feel in any shape or form.” Secret doors swathed in oversize floral wallpaper and wall-to-wall seagrass carpeting are anything but the usual.

A large compass and bold red stamp reading 1856 on the floor of the foyer captures Court’s willingness to spin the rule book. The sign doesn’t mark when the house was built, but rather the year Court likes to tell people her shop was established. “It was just a very interesting time in history,” she says. A signwriter she’s worked with for more than a decade designed the two graphics, along with the geometric squares that are meant to look like tiles. “There was no natural threshold, so we made one by painting the floor,” explains Court. The addition ultimately inspired her to turn it into a ceramic tile range.

While every other Australian seems to crave sun-drenched rooms, Court coated the home’s blank walls in sage green paneling, and in one hangout room, panels of canvas that have been painted a deep navy blue. Pooling curtains that hang from ceiling-mounted racks double as room dividers and insulation during the winter. “I like rooms that slow you down and protect you from the elements,” says Court. Not only will you never struggle to watch TV through a glare in the designer’s house, but you’ll feel an overwhelming sense of calm. “I find that lower light levels can feel really nurturing,” she adds. It’s why the first thing she does in a new home is call in an electrician and have them remove any recessed bulbs.

Like the entryway, the seating nook off the kitchen was another strange corner in need of definition. “The bathroom is awkwardly to the right of that, so if you leave the door open, you’re looking at the toilet, and I can’t stand that,” explains Court. She got clever with the furniture layout, choosing a curved sofa she scored at a vintage store while helping a friend shop for their own house. The piece helps visually block the bathroom, and it’s the ideal shape for curling up with a cup of morning tea.

The only white room in the house is the kitchen, but drama isn’t something it lacks. Court designed the elongated Collar rack drawer pulls in collaboration with her blacksmith. “I am not someone who likes invisible hardware,” she says, laughing. More blackened steel finds, like the Palmer shelf and Chandler utensil racks, help spice up the streamlined subway tile backsplash. “My philosophy is that nothing has to be ugly. There’s no reason to buy anything plastic,” she says of investing in beautiful wooden whisks. The open-air storage system means her friends can see where to grab things when they come over. “They can be a part of the cooking,” she notes.

While the house is full of Court’s prototypes, it’s also a testing ground for Harper, who has set up a full-on joinery workshop in the family’s garage. Among his many woodworking projects: the kitchen table–slash–island, made out of Baltic pine cheese boards (they’ve even got bits of rind on them still), and the daybed with curved detailing at the top of the stairs. “There’s a TV that hides behind the curtain so you can lie back on that bench,” reveals Court. “It’s also the right size for sleeping.”

Court let 6-year-old Silver choose a wallpaper and paint color from the designer’s range for her bedroom. Surprisingly, Court wasn’t worried about the pink florals looking overly busy, but rather the fact that there were so many doors in the room (there’s the one you enter through, one leading out to the veranda, and one that connects her space to the family’s shared bathroom). So she swathed the latter one in the same wallpaper, making it a secret entrance.

When Harper asked Court to go buy a party dress for his 40th birthday party five years ago, the designer came home with not a gown but a massive marble sink (really, it’s three sinks in one). “Then he’d send me out again and I’d come back with something else that was random,” she says, laughing. But the sink was the true gem, so it was crucial that it fit into their new home (it’s more than 6 feet long).

Court covered the walls in her new tile range and sourced an old-school cast-iron tub, which she witnessed come out of the furnace at the factory. In lieu of a glass-enclosed shower “cubicle,” she made the space more of a wet room and worked with a concrete shaper to create a pan.

For detail-oriented tasks like eyebrow plucking, Court incorporated Schoolhouse Electric sconces, but most of the time she’s relying on light streaming in from the small porthole window (another one of Harper’s projects) and candlesticks. “I’m just not scared of having rooms that are darker,” she says. And the space couldn’t be brighter.