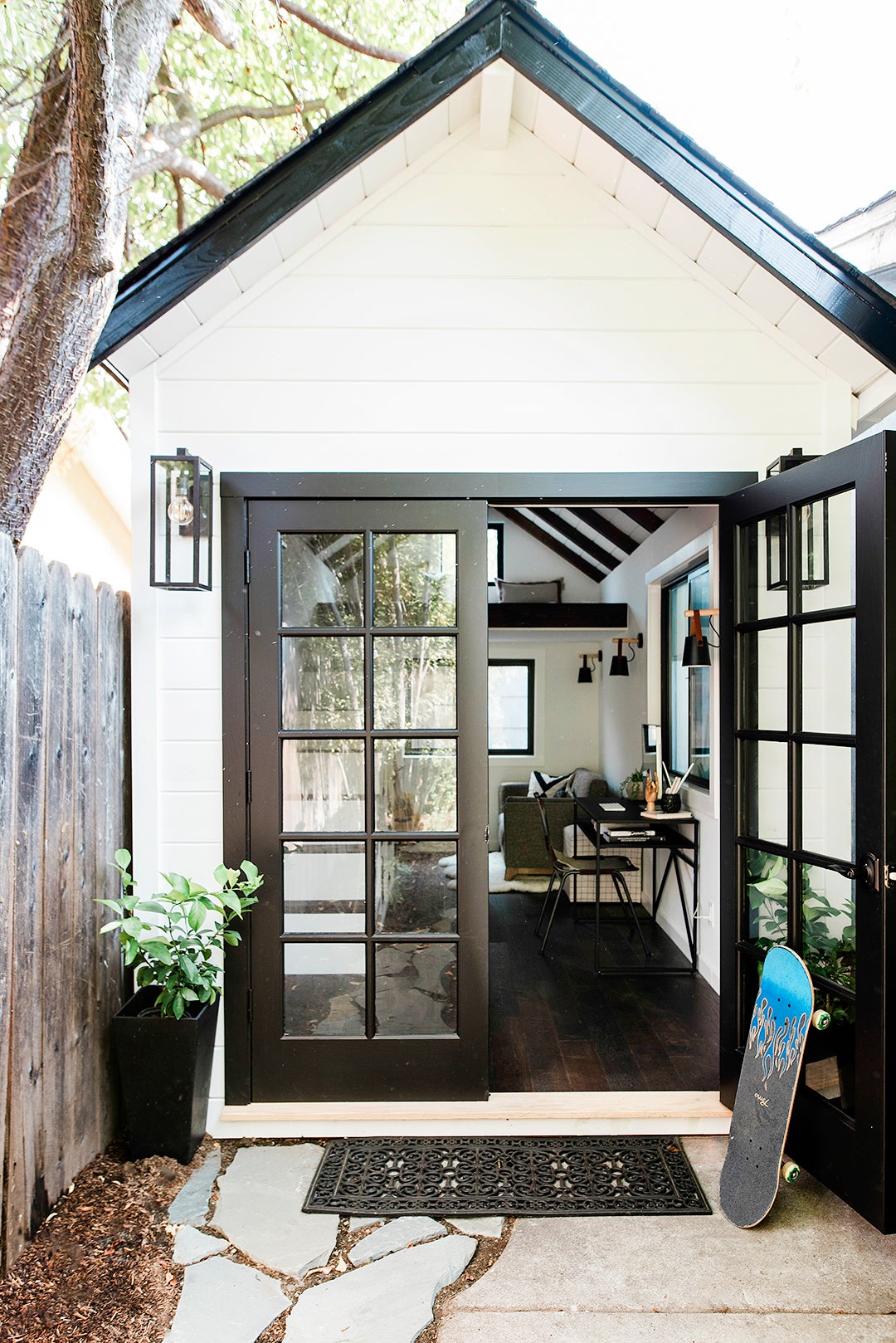 Redwood City, California–based interior designer Lisa Furtado’s eldest son, 14-year-old Mason, had already been on a three-year campaign for a space of his own when the pandemic hit last year. Six months in, those pleas reached new heights. With three kids—Mason, Grady (12), and Delaney (9)—in a three-bedroom, two-bathroom space, the Furtado family, like so many others, was beginning to feel the squeeze of the doing-everything-at-home lifestyle.

“We always joked, ‘You can go live in the playhouse,’” says Furtado, but with her tweens starting to crawl the walls, the quip soon became a serious consideration. The designer turned her eye to the weathered structure in the backyard. There was no way to renovate the playhouse into something livable, but Furtado found herself imagining a complete upgrade that could act as a bunkhouse retreat.

With the poured-concrete pad already in place and the neighbors’ blessing secured, Furtado plotted out a slightly larger and more robust building to sit in the same spot that the playhouse once occupied. She envisioned a simple structure that could be moved in the future if needed (it’s essentially a glorified shed with electricity, but no plumbing). “Originally it was just going to be one story, but we didn’t think there would be room for all the stuff I wanted, like a desk, sofa, and bed. So that’s why we made the loft bed,” Mason explains of the 18-by-7.5-foot tiny house that replaced the 8-by-6 playhouse.

The one catch for her son’s dreams of having his own hideaway becoming a reality? “We told him, ‘You have to help build it,’” says Furtado. Her thinking was that the project would occupy him during the endless hours of last summer’s stay-at-home life—and that he might appreciate it more if he worked on it. (Thankfully her trusted contractor was willing to take on a teenage apprentice, too.)

Together, the designer and the contractor planned out the basic layout of the 135-square-foot house, which features a loft bed with seating area below, an office setup, and storage tucked under the stairs. They strategically left room for tweaks as the project progressed, because Furtado was designing based on what she could find in stock. With supply-chain issues and the whole country on a home-improvement kick, she says, “We had to get scrappy.” She opted for off-the-shelf windows from Home Depot, which she painted black. Likewise, the engineered oak flooring was chosen because it was readily available. The French doors were a lucky find on Craigslist.

Furtado’s design-as-you-build approach also helped them catch mistakes before they happened. For example, once the walls were framed up, she and the builder decided to widen the stairs. “Until you are standing in a confined space, it’s hard to visualize how little room you are dealing with, but then when you spread a 14-year-old’s arms out, you can see it clearly,” she says, laughing.

The furnishings, too, had to be carefully chosen based on size and what was available, like the Article love seat, which was ready to ship, and the slim-profile metal desk, a surprise $100 score from Target. Furtado tried to keep costs low but spent a little more on the fixed elements, including lighting from Rejuvenation, Visual Comfort, and Ava Bellucci.

The whole project ended up costing between $15,000 and $18,000 (Furtado was not tracking expenses to the dollar, since it was done ad hoc), which is substantial but, as Furtado points out, a fraction of what an actual addition to their house would have set them back: “Here in the Bay Area, that starts at $100,000.”

It was also a small price to pay for familial harmony. “It’s really changed Mason’s outlook, and we’ve all felt that,” says Furtado. Her son agrees: “My favorite thing is having my own space to chill and relax in [where I can] do my homework, watch TV, use my computer, play guitar, and sleep.” And to Furtado’s delight, he still spends plenty of time in the main house: “We thought he would never come inside, but he just needs a few hours alone and then wants to be back near everyone.”

The investment also hints at Furtado’s ulterior motive. She happily runs her design business from the family’s kitchen, but admits that she imagines herself settling into the teen bunkhouse when Mason graduates in three years. “It would make a great little office space,” she muses.