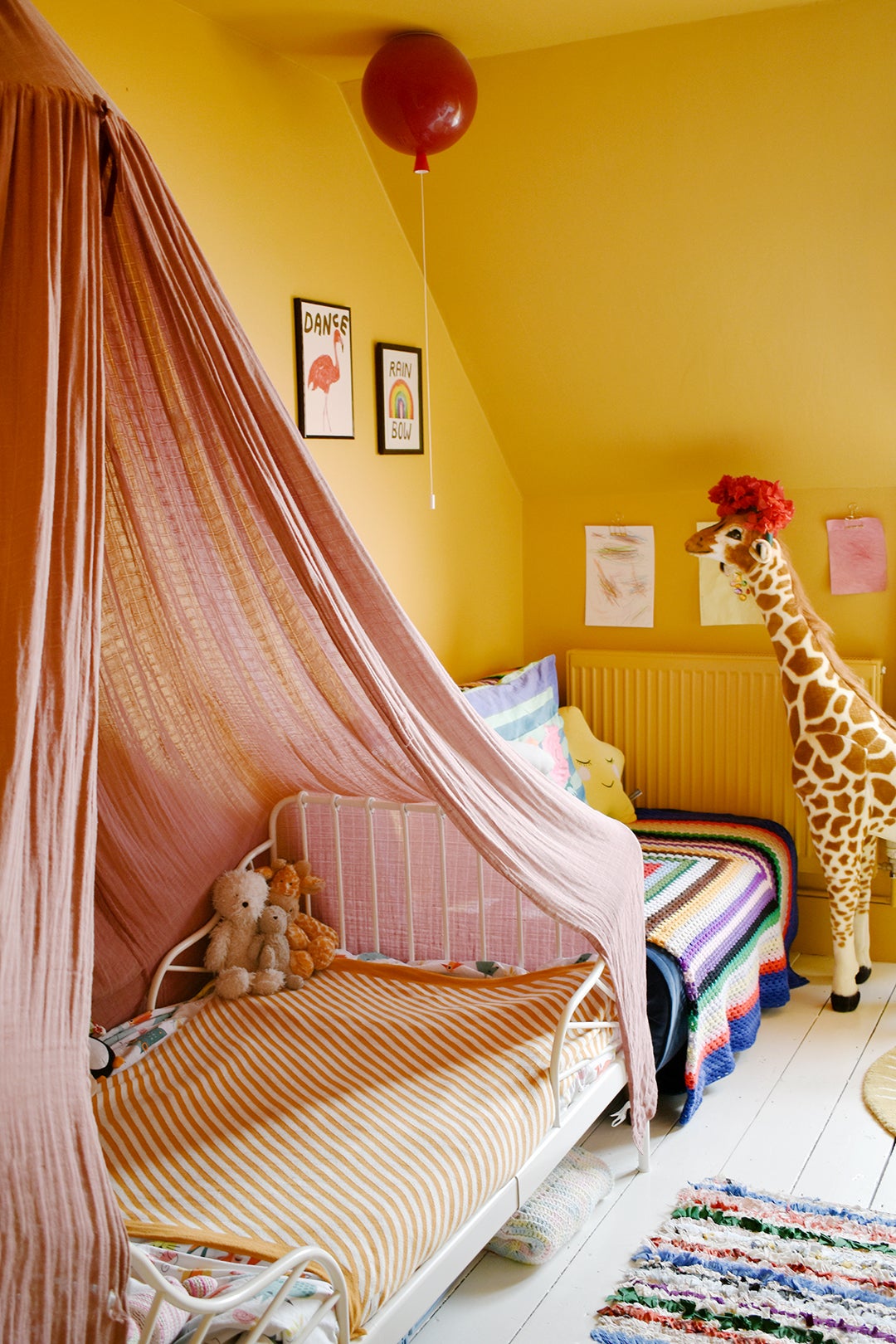 When Natasha Lyon, founder of dried flower company Appreciation Project, moved from East London to the Kent coast with her husband, John, and their children, Beatrice (5) and Thomas (3), in 2019, she already had a design brief bubbling away in her mind for the kid-friendly attic bedrooms that awaited them. As with most parents, the couple took care to set a peaceful scene and encourage sleep but also have the spaces be HQ for play and igniting the imagination. “I wanted them to feel really fun and creative,” says Lyon.

Acquiring the seaside home had taken the family two years, so Lyon had started collecting and squirreling away finds in anticipation of the move, like Thomas’s red metal bookcase (a preloved gem) and the handblown glass Memory balloon lights by John Moncrieff that adorn each child’s ceiling. Both Beatrice and Thomas have their first-name initials in the form of oversize letter blocks that were salvaged from an old fairground, which Lyon picked up in a shop in Suffolk. “I just knew they were perfect,” she says.

After carefully considering clothes storage, Lyon decided against traditional wardrobes and went with vintage tallboy units that she spruced up with a lick of paint. “I don’t really have time to be hanging up clothes, and this way the kids can access their things themselves—which is good because they like changing outfits a lot!” she says, laughing. With toys, one activity with big appeal lives in each room: a train track for Thomas and a dollhouse for Beatrice. Everything else is stored in baskets for ease. “That way I can scoop the items up to make things tidy again,” says Lyon of her low-fuss approach to organizing.

When it came to choosing just the right paint colors, she tapped into her former career as a handbag designer for brands such as Acne Studios and Burberry, where inspiration seeking required plenty of research and consideration. “I looked at a lot of magazines and on Pinterest, but I didn’t want anything too stereotypical,” she says. After going through several paint swatches for Thomas’s room, who was 15 months old when the family moved in, Lyon found that the minty green Japanese Maze 2 by Dulux “really seemed to pop in all different lights.” Adhesive birds by Charley Harper above the bed complete the look.

For Beatrice she landed on Yellow-Pink by Little Greene. “We both love yellow, and it reflects her bubbly, happy spirit. It’s more mustard than pastel, so it feels quite sophisticated and takes other colors against it well,” explains Lyon. She embraced the sloping walls and decided to bathe each attic space entirely in color, as opposed to establishing traditional ceiling surfaces in white. “We’ve done this for all the rooms upstairs and it creates such a nice atmosphere,” she adds.

Reading is a big pastime for the family, and Beatrice’s window nook is where they gather every evening for story time. “It has windows on each side to let as much light in as possible, and I’ve covered the bench with cushions and added pom-pom fairy lights and soft toys,” says Lyon. “It’s one of my favorite spots in the house.”

Other popular hangouts are the sleepover-approved setups in the kids’ rooms that allow for guests—with a little reshuffling: Beatrice has a velvet sofa bed that folds out to a large single, on which Thomas sleeps when his parents claim his IKEA Hemnes daybed (that converts to a grown-up double). “We’ve taken over the other rooms in the house with our business, so when friends come to stay, we give up our bedroom,” admits Lyon. “At one point I shared Thomas’s bed with him during the lockdown, and it was really sweet to be able to do that. It was super-comfortable, too!”