It’s all about balancing the vibes. 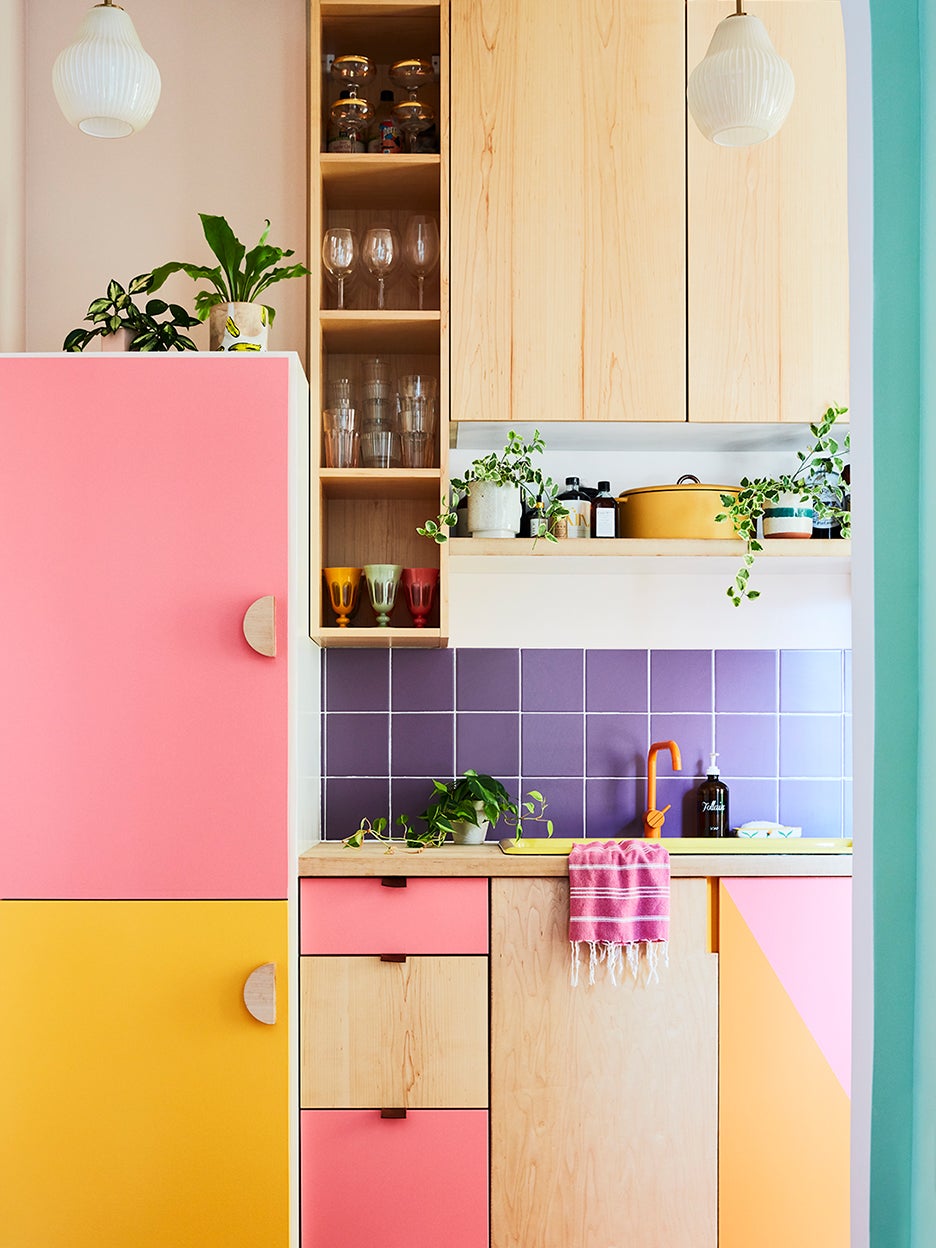 Latham Thomas describes her home as iterative, a constantly evolving and transforming thing. Her business is similar: Mama Glow, a maternal health and education company that trains doulas and serves expectant and new families, was inspired by Thomas’s “incredible birth” of her son, Fulano, with a midwife. “After that, I knew I was going to be helping women have the best experience of their lives,” she says. Since launching in 2003, she has built the prominent practice—with a clientele that includes Alicia Keys, Ashley Graham, and Anne Hathaway—and authored two best-selling books, the most recent of which, Own Your Glow, is a guide to self-care as a pathway to empowerment.

When it came to designing her space, Thomas created a bright, sun-soaked oasis. The four-story townhouse in Brooklyn’s South Williamsburg, where she lives with her fiancé and 17-year-old Fulano (who gets his own zone on the second floor), is filled with sculptural plants, layered nooks, and a rainbow of accents.

Color is a constant—from the powder room’s cheerful orange-print wallpaper to the calming mint-hued wall in the living room to the showstopper of a pendant light by Finnish designer Hanna Anonen hanging above the stairway to the rooftop. “I love the way it casts a soft sherbet hue at night. It feels like a celebration when you look at it,” she says of the lamp.

For Thomas, those bolts of color are more than an aesthetic statement. “It’s an extension of my personality,” she says. “I forget that some people just want neutrals.” That playful approach to experimenting with punchier palettes comes out of a need to break from the more traditional home she grew up in in California. “Our house was set up like a museum—there were spaces that were off-limits to children,” she explains.

Making people feel comfortable—physically and emotionally—is second nature to Thomas: “I do that in my work, but I also seek to create that atmosphere in my home.” In her bedroom, she places crystals, cacti, and found objects from nature along the windowsill to “charge the space and keep the energy light.” In the cocoon-like living room, plush carpets, sheepskins, a fireplace stacked with books, and a pink velvet sofa welcome visitors into the fold. “We have a little guest nook [on the floor above] that I wanted to be really cozy, like you’re tucked away in a motel somewhere,” she says.

Around the corner, Fulano’s bedroom acts as a creative outlet—a place he can read, produce his music, and play guitar and drums (his DJ equipment is set up in the adjacent entertainment room). “He used to do his homework at the dining table, but now he always sits at his desk. He mastered his album there,” says Thomas. Fulano, who studied at the Berklee College of Music this summer, picked out the abstract-print bedspread and soft, sound-absorbing rug, along with shelves to display his growing art collection (several pieces, like the Tracy 168 graffiti Mickey Mouse, are gifts from artist friends of the family).

A favorite family hangout (and the home’s chromatic crescendo) is the kitchen—where Thomas, an avid cook, can prep nourishing dishes after a farmers’ market haul, such as a grain salad with farro, kale, and wild mushrooms. (Fulano is the household’s go-to salad dressing– and marinade-maker.) The kitchen was originally a narrow galley; Thomas opened up a wall to create an archway and worked with a designer who drafted cabinets that were then made by a local builder. “I want you to go in and feel like you are on vacation,” she says of the room’s “airy tropical vibes.”

The lush greenery carries through the rest of the home and serves as a “mood builder” for Thomas, who counts 31 plants on the parlor floor alone. “They are really grounding during this time,” she says. “There’s life going on; there’s something growing.” She first learned to tend plants from her grandfather (who plays jazz to his own leafy buds and massages the leaves) and later studied with an herbalist. Her practice of self-care is “getting my hands in some soil and growing kale on the roof,” she says. “I do a vocal meditation. If it’s nice out, I sit in the sun.”

This year, acts of self-care have been extra-essential for Thomas, whose company aims to amplify the experiences of Black mothers. As a doula, she sees herself as having two roles. “It’s critically important not only to advance maternal health and Black maternal health specifically, but also to arm families with the tools they need to advocate for themselves,” she stresses. (In her home base of Brooklyn, Black women are eight times more likely to die in childbirth than white women.) And as the country confronts racism and police violence against Black Americans, quarantining as a Black mother was all the more significant. “It was good to know my son was with me,” she says. “That he was with me was a reminder that he was safe.”

Creating a safe retreat that brings joy and comfort simply by stepping inside is what Thomas does best. From the serene rooftop garden to the ultra-vibrant kitchen, her spaces put people of all ages at ease.