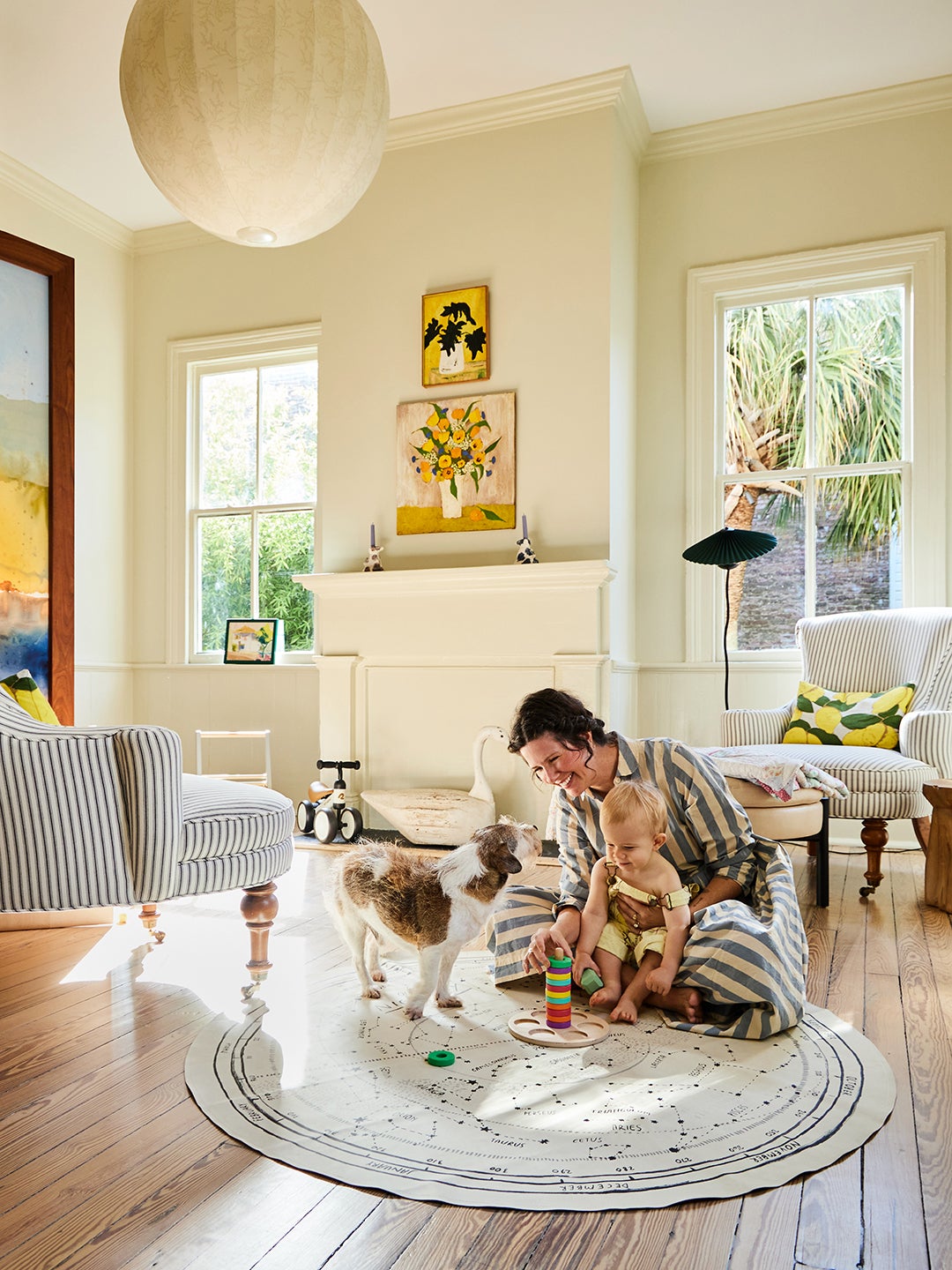 The day the crew removed the fireplace from the middle of the kitchen, the whole neighborhood showed up to watch. Giant steel support beams had to come in, then be hoisted up. “It was every dude’s inner-5-year-old fantasy,” says artist Raven Roxanne, laughing. It was also a major milestone in the Charleston, South Carolina, home’s seven-month-long renovation. She brought cookies, naturally.

After five years in the city, Raven and her husband, Thomas, had known exactly where they wanted to move, down to a four-block radius. They’d meandered the Harleston Village streets on his motorcycle countless times, noting which properties were too big, which had been split into rentals, and which could be just right. So when their real-estate agent called, they didn’t hesitate. “He was like, ‘Hey, I’m walking in your house,’ and we were like, ‘What are you talking about?!’” Raven remembers.

It wasn’t officially on the market yet, but the agent had a good feeling it was their future home. Built in 1875 with sweeping rooms and 13-foot-high ceilings (14 on the second floor), the property could easily accommodate a soon-to-be growing family (their son, English, now 1, arrived a few years later). “The pool was the best bonus for this Florida girl,” Raven adds, and it bounces dreamy, rippled light into the room facing it. Although Thomas’s parents had passed away 15 years ago, “I walked in and I was like, ‘Your mom and dad picked out this house,’” says Raven.

The real clincher, though? “We have such fun people on our block,” says Raven, construction-obsessed neighbors included. Two doors down, there’s a couple from New York with three kids. Next to them lives a beloved city council member, and next to him is Raven’s best friend (and godfather to English), event planner Gregory Blake Sams.

The same day the couple closed on the house, they started the top-to-bottom remodel, guided in large part by another pal, the design-savvy lighting designer Melissa Sutton, and contractor Joel Wilson of Renew Urban. Taking out the kitchen fireplace to open up the space was one difficult decision of many. “There are a lot of opinions in Charleston about what you should do to these houses,” explains Raven. “I didn’t want someone to walk in and say, ‘They ruined this home.’” So although that one hearth is gone, she ensured the other seven (!) remained intact. Same goes for the original pine floors—with a slight update.

Raven held firm on lightening up the planks to get rid of their reddish cast. “We had to go through four different flooring people, because they all said, ‘No, we’re not doing this,’” she recalls. Now, though, Wilson proudly brings new clients around to show them what’s possible. “And I’m like, ‘Hey, I had to fight for these damn floors!’” Raven jokes. But in all seriousness, she might be his biggest fan: “Joel took really good care of me and Melissa. I see him, even to this day, like four times a week in the neighborhood.”

When it came time to nail down paint colors, Raven and Sutton were heavily influenced by British brands like DeVol and Plain English. Although an ocean stretches between here and there, Raven argues the architecture in the two places is quite similar, as are the palettes. “When people think about Charleston, they think of Rainbow Row and bright colors, but really, especially with our history, there’s a darkness to this city,” she explains. “There’s a depth. Our houses can hold darker colors more than modern spaces can.”

So the furniture-like kitchen cabinetry is an almost-black green—Charleston green, Raven points out—and the den a rich sage. “I wanted the colors to fully absorb you,” she says. You’d expect such bold choices from a painter, but the rest of the rooms are the opposite. A subtle limewash coats the walls of the front spaces, while the playroom is wrapped in a buttery vanilla shade. “People walk into my house thinking it’s going to be a lot more colorful than it actually is,” she says. “But I want the restraint of color. I don’t want colors that make you feel anything other than calm.”

The one departure is English’s storybook bedroom, a happy riot of deep blue, forest green, and sunshine yellow that Raven dreamed up with Sams. “When we finished it, one of my friends came in and said, ‘Oh, my gosh, it looks like Goodnight Moon.’ I had never thought about it, but it does.”

Unlike the kitchen fireplace, some pieces—like her own golden artwork above her grandmother’s antique sofa, reupholstered in green performance velvet—hold so much meaning that she finds she can’t part with them. After taking her father for cancer treatments—he was staying with them that year—Sams surprised her with a bouquet of yellow tulips, one of her favorite flowers to capture. She did so that very afternoon. “It was such a moment that I just had to keep that painting,” says Raven. “They’re my birthday flowers from my best friend.”

That kind of impromptu visit is Raven’s love language. Sams splits his time between Manhattan and Charleston, but “if he’s in town, he comes over every morning at 7 a.m. for coffee and just hangs out with English,” she says. “I was telling my friends: You’re a true friend when I see you walking down my driveway with a pool towel and you didn’t tell me beforehand. You’re just like, ‘Hey, I’m here!’”