This Tiny Trailer Is More Stylish Than Most Apartments

How a family of four functions in their renovated RV. 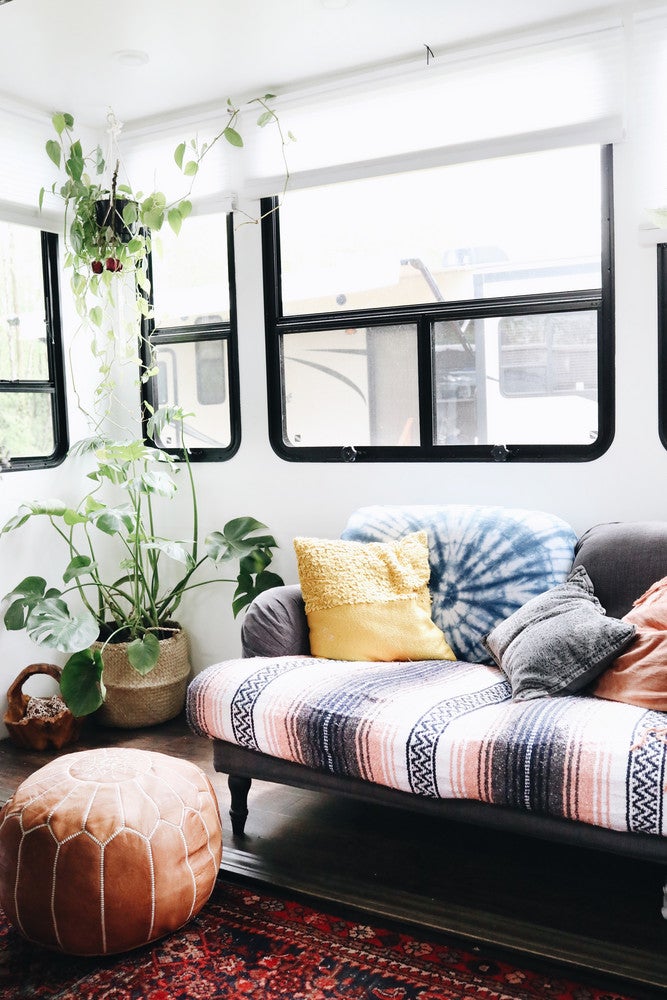 Some pseudonyms are more fitting than others. Autumn Bailey’s alter ego suits her to a tee. Instagramming and writing under the guise of Asphalt Gypsy, the mama-turned-blogger offers a transparent picture of what life on the road with her two (soon to be three) little ones and her husband in tow is really like. Yet, still, living tiny was never a part of the plan. The couple’s unexpected, cross-country journey began back in February, 2016, when Bailey’s husband—a welder who frequents breweries, wineries, and distilleries across the US—was called to the east coast.

“It was a month and a half after our first child was born when he got a call saying he needed to be in Virginia in two weeks,” recalls Bailey. “We decided probably within five days that we needed to do this and bought a trailer that could fit my car, hopped in, and left. It was a whirlwind and it doesn’t really feel like it’s stopped.”

Packed into their renovated Keystone Fuzion 416, which she and her husband currently share with their two and a half-year-old son, Bear, and seven-month-old son, Oak, the soon-to-be family of five have been bouncing back and forth from coast to coast for the past two years. Now a bright and breezy spot to call home, Bailey’s mobile abode is filled with vintage rugs, treasured finds, and leafy greens. We recently caught up with the blogger to learn what it’s really like to live small on the go. P.S.: It’s not as glamorous (or as cheap!) as you’d think.

What were some of the biggest changes you made during the remodel?

“The trailer was really brown when we first got it—like, pretty much just shades of brown and beige, with a lot of wood and veneer and dark brown leather. There were TVs in every room and neon lights on the chairs. It was pretty man cave-y! We didn’t change it for a year because we didn’t buy it thinking we were ever going to remodel it. The main thing was repainting it white. That was probably one of the biggest changes that we made. Originally, we had a master bedroom in the front and we converted that into our kids’ room and we converted the garage into our room. That was probably one of the other big things that we did.”

You’ve packed so much style into such a tiny space! How would you describe your aesthetic?

“I don’t really know what I fit into. Originally, when I did this, all I knew was that I wanted white walls and dark, good looking wood floors. I think I just happened upon things that I really liked. I found all my old vintage rugs on eBay—I got my two biggest ones for $99, so those were crazy deals! I kind of like the idea of just finding things that speak to me. My husband really likes the rustic-cabin look, so I tried to put in a lot of different textures of wood to kind of make it feel a bit more homey and not super modern. Because our cabinets are all gray, I didn’t want it to be super monochromatic.”

How did the kid’s space come together?

“The space where the toddler bed is used to be a dresser and closet. The room was so tiny as it was so we just decided to gut that and turn it into [Bear’s] bed so it opens up a lot of space. The door, I made. I’d seen pictures on Pinterest of people who had that herringbone pattern, so I thought it was super neat. It’s the first and last door I’ll ever make!”

How were you and your husband able to renovate this space all on your own?

“Looking back on it, I probably would have hired someone to paint, because that was terrible. But we did everything ourselves. My husband was working in the Bay Area six days a week, so he would come home on Sundays and work. Then, during the week, I would work while my first born was napping or asleep at night. It was a long process.”

Was living small a totally new experience for you?

“Most of my family (brothers and sisters) were actually born on a bus. My mom and dad were crystal miners/ jewelry makers back in the 80s and 90s and they travelled around on a US air force bus for a few years! Then they moved into a house, but we lived off a generator for most of my childhood. We’re essentially doing the same thing now, so it really doesn’t feel that much different. Existing in a tiny space with your kids and a husband… the learning curve never goes away.”

What are some of the unseen costs of living on the road?

“I’ve met a few people that live really cheap in their tiny home or trailer, so I know it’s totally doable. But we didn’t go into this caring to save money. Right off the bat, we had to buy a brand new trailer and a brand new truck to haul the trailer. That in itself was expensive. I don’t think people realize that gas to tow your trailer is a big expense. My husband normally gets eight or nine miles to the gallon when he’s towing, so it can add up—especially when you’re going cross country.”

“Also, trailer parks are crazy expensive in some places. It’s hard to find a spot in Northern California in the summer that’s less than $1,000 a month. That’s great if you’re comparing it to renting an apartment, but when you’re paying $1,000 for a piece of gravel, it’s kind of ridiculous. Plus, there’s always maintenance. We had a generator that died a couple weeks ago so we had to shell out some money for that. General wear and tear can really add up.”

What are the most memorable destinations you’ve visited in the RV?

“We went to Virginia for eight months and then were back on the west coast in Santa Rosa and then back in Truckee, which will always be my favorite place to be. That’s our home. We were recently stationed in Bend, Oregon for three weeks and it was beautiful. That was so unexpected. We actually boondocked the whole time we were there and we didn’t have to pay which was great. We had never seen that area so it was a really cool experience.”

What is it like doing this with your kids?

“It is really easy actually! Everyone’s always like, ‘Is it crazy living in such a small space together?’ But it’s honestly so simple. I can sit on the couch and see into every single room. There’s just less for my oldest, Bear, to get into. I can see him from everywhere, so that part is really cool. We don’t have many toys in the trailer because kids toys take up so much space so it forces him (and me) to be outside a lot.”

What does the future look like for you and your mobile crew?

“We’re planning on trying to do this as long as we can but my husband is definitely starting to feel a little cramped. The kids are young, which is the main reason why we wanted to do this when we did. Kids that age don’t take up that much space and they’re going to be little for a long time.”

How One Family of Five Lives Happily In a 180-Square-Foot RVWe Have a Color Crush on This Tiny, Blush AirstreamThis Tiny Mobile Home Comes With a Built-In Rock Wall