The Solar-Powered Ecocapsule is the Future of Tiny Homes

Here's how the concept became a fully functioning mobile home. 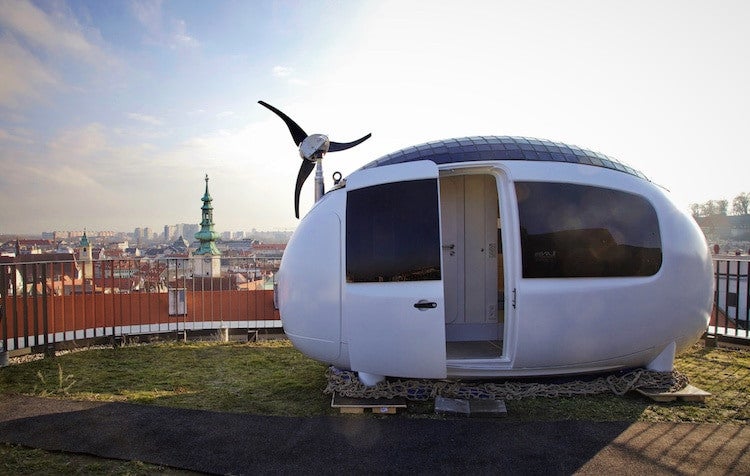 If you’re a person looking to live off-the-grid or someone who dreams of traveling with a self-sustaining mobile home, chances are you’ve heard of Ecocapsule. We’ve been following the innovative micro home’s development since a prototype was released and put up for pre-sale in 2015. In the interim, exciting developments have allowed the Ecocapsule to begin delivery of its first models, and the company recently helicoptered the first finished pod onto the top of a building in Bratislava.

It’s an exciting time for the Ecocapsule, which was originally conceived by a Slovakian architectural studio. The eco-friendly portable home sleeps one to two people and is completely self-sufficient. Power is provided by integrated solar panels and an extendable wind turbine, with a battery capacity of 9kWh. Water is supplied by external sources (like a lake or from collected rainwater), all of which is then cleaned with built-in filters. And, if you are worried about getting too hot or too cold, HVAC is installed to make sure the temperature always stays perfect in the smart home.

In just 88 square feet (8.2 square meters) of gross floor space, the interior houses a foldable double bed, kitchenette, composting toilet, and plenty of built-in storage. After the initial run of 50 first generation models, Ecocapsule aims to scale up with mass production. In fact, they are already taking pre-orders for a cheaper, second-generation model, which they hope to release after the first year.

As an incredible example of how a conceptual product can transform into a reality, Ecocapsule is a fascinating look at how innovators must take their time and adapt to the market in order to succeed. We had a chance to ask co-founder and CEO Tomáš Žáček about Ecocapsule’s past, present, and future. Read on for our exclusive interview about this innovative self-sustaining portable micro-home.

Can you share the original inspiration for the Ecocapsule and how the team came together?

The story of Ecocapsule began in 2008, when our architectural studio Nice Architects (now known as Nice&Wise) participated in the Andes Sprout Society Idea Competition to design a small housing unit for an artist. Although the design wasn’t awarded in the competition, the breaking point for the project was when Inhabitat chose Ecocapsule for their selection of the most interesting picks from the competition.

A massive amount of inquiries persuaded us to develop this project further. Yet, technology in 2008 was not ready for a truly independent house. Over the next five years, we worked on the technological and product design of the Ecocapsule in order to bring the best possible product. In 2014, advances in technology finally allowed us to finish the Ecocapsule prototype equipped with systems necessary for long-term independence. As for the team, at a certain point, we realized that this had become a big thing and that we couldn’t manage everything just by ourselves. So, we found like-minded people and formed a strong team.

What were some of the biggest challenges in taking the Ecocapsule from concept to reality?

It has surely been a long road, but frankly, we had so much to do that, in a way, it did not seem like a long time at all. In the years before the investment, the most crucial challenges were connected to the lack of time and financial resources. This changed after the investment since it has created a stable ground for us to work and focus on leading the project to completion.

We have also had to overcome everyday challenges in the production process, but these challenges have also been positive, since we have learned a lot with every step of the process. Overall, it was a very positive experience with a lot of support from fans of the project as well as our friends and families.

Who is the ideal Ecocapsule customer?

We have been asked this question very often, and after all these years, I don’t think we have come closer to a definitive answer. This is because our clientele is very diverse. It includes young couples, older couples, singles, adventurers, researchers, surfers, fishermen, winemakers… and I could go on. From the start, we wanted to create a versatile product that would suit the needs of different types of clients and I think we have achieved that.

Can you share a bit about how the interior was conceived to maximize livability in such a small area?

When we came up with the first design of Ecocapsule for the competition, it was four times its current size. Very soon on, we realized that in order for Ecocapsule to be more versatile, we needed to make it mobile. So, we had to create something that is big enough to live in but at the same time small enough to transport in a shipping container. In smaller spaces, you have to count on every centimeter of space, so the design of the interior was a long process. It has involved a lot of testing—adjusting the dimensions of the space itself, as well as the dimensions of furniture. We are very satisfied with the result. Most people are pleasantly surprised by how spacious Ecocapsule feels when they first step inside.

You recently debuted an Ecocapsule on the roof of a building in Bratislava. Congratulations! When do you estimate that the first generation limited edition models will start being delivered to customers?

Yes, thank you, this is a big accomplishment for us and we were really happy with how the event turned out. The first Ecocapsule from the first series has already been shipped and is currently on its way to Japan. We will continue delivering the pre-orders of the first series throughout 2018.

Ecocapsule states that the second generation models will have a reduced cost. Can you share how that will be achieved?

The second series Ecocapsules will be definitely cheaper. We will achieve this by mass production. If you produce something in small series, you cannot do much about the price, especially if you create a pioneer product such as Ecocapsule. With mass-production though, the price can be lowered significantly.

Aside from cost, what will be the biggest differences between the first and second generation models?

The differences are numerous. The first, exclusive series is intended for pioneer clients and tech-enthusiasts. This series is limited to 50 pieces and it is also geographically limited to markets in the USA, Australia, Japan, and the European Union. An important difference is that the exclusive, limited series Ecocapsules are customizable to a certain degree, so we can fulfill the specific requirements of our clients. As I said, the second series will be mass-produced and thus cheaper. We will announce the price of the second series Ecocapsules in the first half of this year. The sale of that series will be geographically unlimited and the Ecocapsules will not be customizable.

A lot of interested customers are curious about how to move the Ecocapsule and if it has wheels. I know you’ve developed a special trailer for it. Can you give us some specifics on that?

Indeed. The prototype of the trailer is now ready and we can start the production. Basically, it resembles a common platform trailer, but is specifically tailored to house Ecocapsule. The weight of the trailer, including Ecocapsule, will be under 2 tons and it’s a braked trailer. It can be easily towed by most passenger vehicles that are normally used for this purpose.

Once you push out the first and second generations models, how do you see Ecocapsule growing in the future?

Basically, our primary goal is to gradually make Ecocapsule available to a wider group of people. We would like to see Ecocapsule become an alternative option for staying off-the-grid, primarily for mid-term housing. We would also like to make Ecocapsule more resilient when it comes to extreme conditions, mainly in regard to temperature. We have a lot of ideas that we want to realize.

This story was originally published by Jessica Stewart on My Modern Met.