The creative, pet-friendly home comes with a private puppy nook. 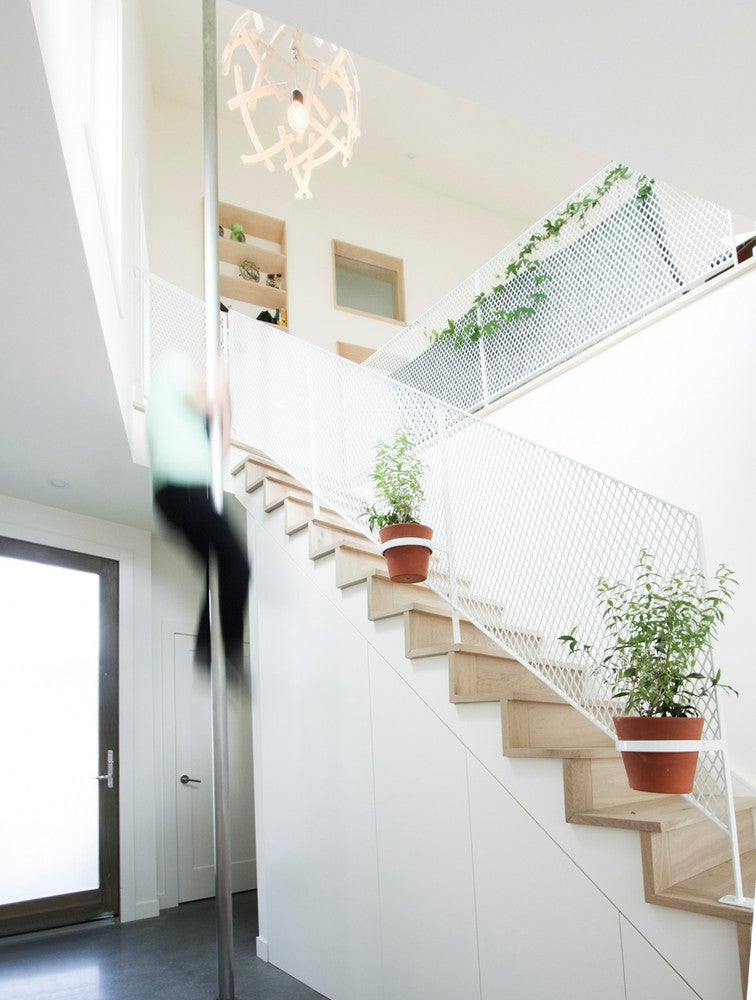 For Matt Kennedy and Mark Erickson, the duo behind Calgary-based design firm Studio North, embracing the challenges that come with building a mod, compact home all seemed worth it if it meant they could preserve one of city’s most historic properties. As a part of a two-phase redevelopment plan to protect a municipally designated historic home dubbed the “Withrow House” (built in 1911), the pair not only purchased the cherished riverfront residence with the hope of refurbishing and renting it out, but made it their mission to introduce new life to the neighborhood by also designing an affordable, tiny home just behind the historic riverfront estate.

“We personally developed this property so we could not only preserve and restore a historic house, but also design and build a laneway house that would act as a flagship project that would exemplify our ideas about laneway housing, compact living, and sensitively developing established inner communities,” Mark Erickson tells Domino.

Despite its tiny size (inside, the laneway house comes in at 850-square-feet), the clever, two-story spread is filled with storage-savvy hacks and resourceful built-ins that prove to make the most of the ultra-efficient home, which Matt currently shares with his girlfriend and their dog, Spencer.

Inside, unexpected surprises include, but are not limited to, a secret sleeping loft, a kitchen island that can be quickly transformed into a dining room table, and, yes, even a built-in dog nook.

Talk about a fun first impression. Why take the stairs when you can scale down a salvaged fireman’s pole every morning? When it came to nailing down the home’s layout, lofted ceilings proved to be the most advantageous design choice.

“The challenge is making a small space feel bigger than it actually is, and to find ways to take advantage of every little nook and cranny,” explains Erickson. “By having a gable roof with lofted ceilings, the space feels much larger and comfortable than it would if it had typical 8′ high flat ceilings.”

Funky, yet certainly functional, the light-filled entryway sits on the same level as the three car garage.

A plant-approved staircase leads up to the second level, where, along the way, guests will come across the home office. You can file this creative fix under landings done right.

Upstairs in the main living area, ingenious built-in cubbies add much-need storage space to the open and airy room. Instead of letting the interior wall that separates the public living areas from the bedrooms go to waste, Matt and Mark decided to take full advantage of the home’s natural divider.

“We utilized almost all of the stud space as storage that services all the spaces that run east to south,” says Erickson. “Above the central bathrooms, we dropped the ceiling to allow for a lofted nook which has a small bed for guests.”

Aside from the bonus dwelling (accessible by ladder), a little built-in nook for keys and other pocket knick-knacks awaits by the front entrance, while a covered cubby hole in the living room offers a convenient way hide the TV and any other unsightly electronics.

Thanks to its unwavering simplicity and overall minimalist aesthetic, the details that are most deserving of attention like the private, built-in dog house—which, let’s be real, is probably our favorite small-space hack in this space—remain the true focus.

“We custom made the dog house for Matt’s dog, Spencer. He’s an important member of the family who deserves a comfy, dog-sized space to call his own!” says Erickson.

Seamlessly tucked away within the interior of the wall, the pet-friendly alcove is certainly a dog-owner’s dream. The pup of the home can also access the cozy dwelling from the master bedroom through a cabinet door.

Any small-space dweller will tell you that not having a designated dining area or even the room for a small eat-in nook is a serious nuisance. We’ve seen our fair share of smart dining room alternatives, and this dreamy kitchen island definitely makes the cut. A combination of marble and wood, the permanent centerpiece can be used either as a cooking workspace or extended into a fully functional dining table.

“We wanted to maximize the usability of the kitchen, so we made the dining table so that it would function as task space when not being used for dining,” says Erickson. “Then when it’s time for a meal it can be used as the dining table. The end of the table can flip up to become a table extension for larger dinners.”

Thoughtfully hidden from view, Matt and Mark also cleverly integrated a pantry into the wall.

Despite all the super cool features inside, Matt’s favorite feature of the home happens to be the sweet arrangement of greenery that sits just outside one of the home’s two bedrooms.

“The ferns that grow in the plant ledge combined with the tree canopy beyond makes it feel like you’re in a cabin,” says Erickson.