The tiny homes inspiring us to downsize. 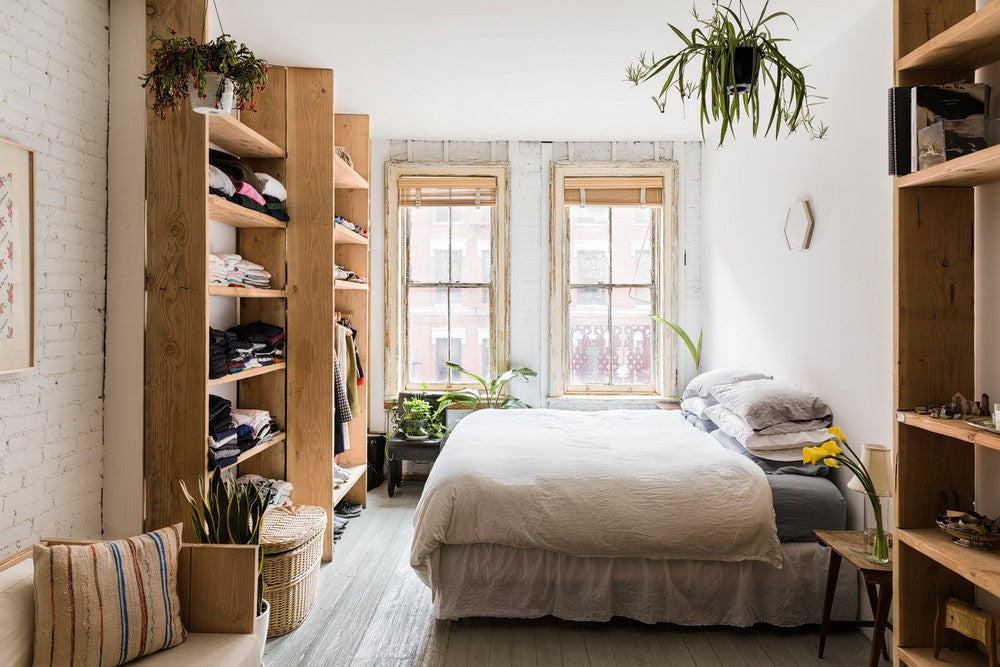 Photography and Design by Studio DB

linoleum floors, and four roommates all living on top of each other. While this is definitely the case for some people, there are plenty of bloggers and designers making downsizing look chic.

From smart storage solutions to minimalist spaces to multifunctional furniture, these are the homes that make the most of small square footage—and do it in the most stylish way possible.

Krissy Jones’s 500-square-foot New York apartment benefitted from a pretty extensive renovation: tearing down most of the interior walls. This has resulted in a fairly unique floor plan—there’s a designated living area, bedroom area, and mixed kitchen/bath area—that features a bathtub in the kitchen, but judging by all the light and newly opened floor space this change has created, we’d say it’s definitely worth it.

Props to Kim Lewis for one of the most uniquely designed tiny homes we’ve ever seen. Her 560-square-foot space is actually two separate units joined by a breezeway that the designer custom built in Arizona then shipped to Austin—and her foray into small-space living is made all the more impressive by the fact that she and her husband are expecting their first child and have some creative ways to make room for baby.

“It’s all about compromise. We’ll probably be moving the washer/dryer outside to a shed so the baby will have its own corner,” says Lewis. And as for the kitchen sink? “The baby’s going to be taking baths in that.”

Chef Lauren Gerrie can fit a professional-grade kitchen in 265 square feet, which means the rest of us have no excuse. She relies on tall plants and cabinets, shelves that climb up the wall, and hanging plants to draw the eye up and make her home feel bigger than it is; for her, it’s all about styling up. Take a page from her playbook and make maximum use of empty wall space by filling it with functional shelving options.

Kate Oliver and Ellen Prasse have made a living renovating vintage airstreams, which means they come equipped with a few parameters for designing tiny homes. The golden rule? “Needs and function come first, wants come second,” they said—though this gorgeous airstream inspired by desert color palettes is anything but strictly utilitarian.

A full bathroom and king-sized bed turn every idea about restrictive small-space living on its head. Custom tile in the shower and herringbone floors add to the high-end feel of this home, proving once and for all that small can be stylish.

You’d never know it to look at the pictures, but this Toronto apartment is just 500 square feet. Designer Stacey Cohen ensured she maximized every available inch by taking advantage of the unbelievably tall ceilings and creating a built-in media wall that houses everything from wine to a television.

Her biggest tip? Go high: “Build your storage to the ceiling; this not only helps with the clutter, but it also draws the eye up and makes the space feel larger. Use the higher shelves/cupboards for seasonal stuff or items that are used less frequently.”

If a family of five—including three young kids—can make it work in 180 square feet, there’s hope for the rest of us. Granted, the renovated RV may only be a temporary home while blogger Ashley Petrone and her husband build their dream house, but the attention to detail in the decor is definitely not something you’d find in a short-term residence.

From two different tile backsplashes in the insanely tiny kitchen to graphic patterns scattered throughout, you’ll want to bookmark every photo of this gorgeous small space.

Whitney Leigh Morris is our perpetual source of inspo for tiny spaces, thanks to her 362-square-foot California home succinctly dubbed the “Tiny Canal Cottage.” She recently renovated another tiny home on a renter’s budget, and it’s just as stylish.

For Morris, multi-functionality was the name of the game, as she opted for pieces that could work double duty such as a queen-sized fold-out bench in the living room and an upcycled console table-turned-dining table and prep area in the kitchen.

What this Brooklyn apartment lacks in square footage, it makes up for in plants. Seriously, there’s not a single room in this 670-square-foot space that is without greenery—and yet despite all the pots, it doesn’t look cluttered or cramped.

Instead, they breathe life (quite literally) into chef

s home, which is equally full of travel mementos and pretty little decorative pieces. And yet, somehow, it still feels open and airy.

in which groups could choose their favorite corner to sit and talk,” says lead architect Rodrigo Maçonilio of this 410-square-foot Sao Paulo home. Minimal furniture makes the apartment feel more spacious, and the four designated “rooms” (bedroom, kitchen, bathroom, and office) are all situated on the periphery so as to keep the main sitting area unobstructed.

Minimalism equals simplicity, which bodes particularly useful for a tiny space because there are less material items with which to clutter it. Art director Casey Zhang redefines what real minimalism means in her 600-square-foot Brooklyn apartment, which is stripped back to the bare minimum and adheres to a strictly neutral color palette. There’s plenty of open space in this intentionally decorated home, despite the very literal spatial restrictions.

This story was originally published on March 28, 2018. It has been updated with new information.