Starting with the olive kitchen. 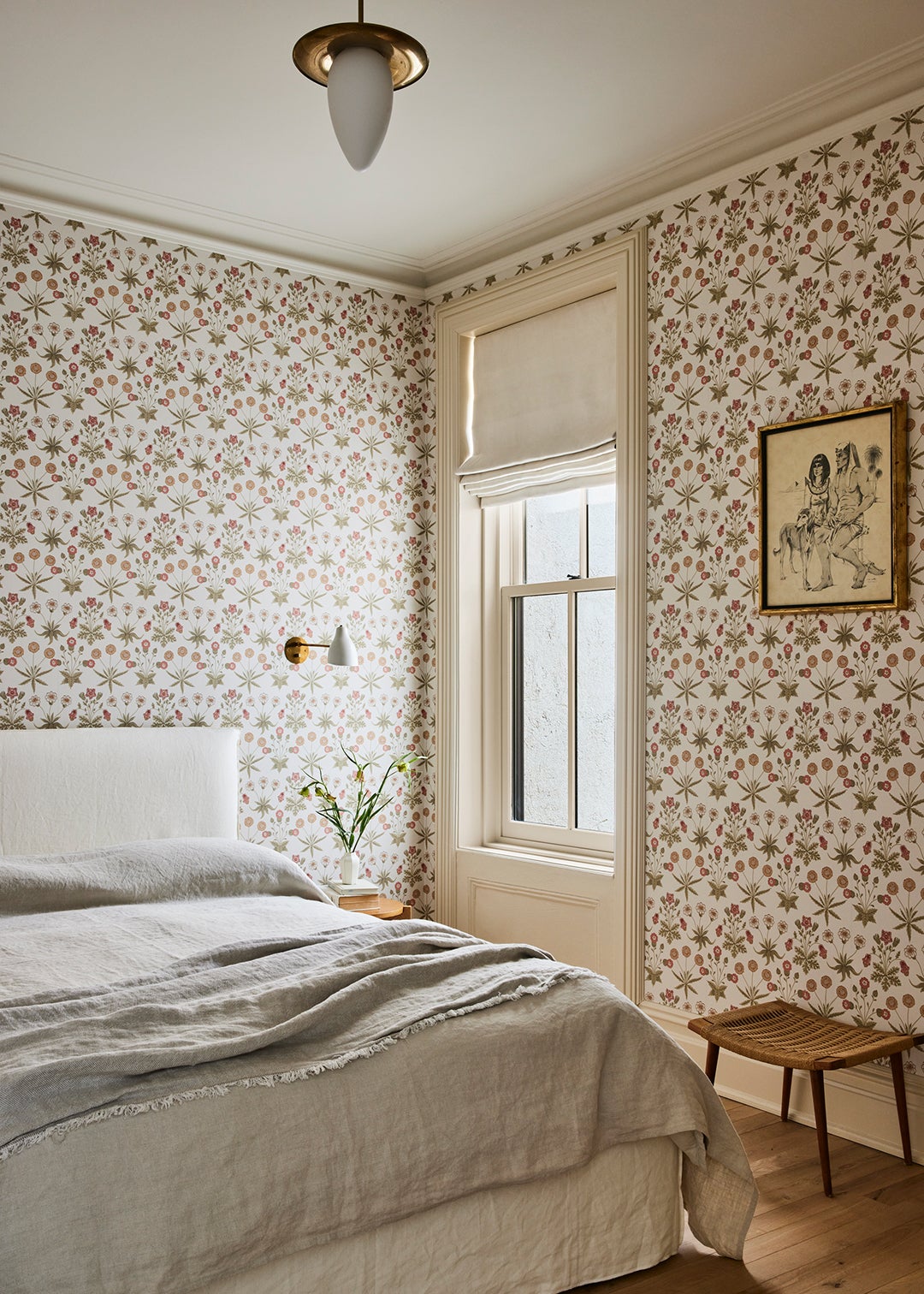 When And Studio founder Arianna De Gasperis stepped inside her circa-1850 Queen Anne Victorian brownstone in Jersey City’s historic Van Vorst Park neighborhood for the first time, she couldn’t envision paint on the walls. “The way the light comes in, it was just asking for texture; that aged feeling,” she explains. De Gasperis and her husband (formerly longtime Manhattanites) called in the duo behind Jersey Ice Cream Co. to plaster the entire 3,300-square-foot house over the course of two weeks. “My goal was to make it feel as homey and warm as possible, like an old London townhome,” she says.

When the couple bought the three-story place from the previous owner, they had made a promise to honor the integrity of the architecture—well, really, De Gasperis wanted to accentuate it. She had an internal list of details she would not touch: the grand staircase, the original trim and molding (where salvageable), the fireplaces, and entry mirror. All the elements she added during the eight-month-long renovation—a DeVol-designed kitchen, floral William Morris wallpaper, unlacquered brass fixtures, oak herringbone flooring—preserved the patina of the almost-200-year-old house. “As I child, my parents purchased an old home in Toronto and renovated it themselves. I remember the literal blood, sweat, and tears they put into the project, and that was something I always craved in my adult life,” says the designer.

Carving out a large kitchen wasn’t just a matter of tearing out walls. Once said barriers were taken down, De Gasperis hired a seasoned plaster worker to create new moldings to match the 1800s detailing everywhere else. That way, “you can’t tell where there was a wall taken down or a new doorway put in,” she points out. “We really did the best we could to make it feel like it wasn’t renovated.” A lover of British-designed kitchens, De Gasperis tasked London-based DeVol with creating the cupboards and swathing them in an olive green hue that’s color-matched to Benjamin Moore’s Devonshire Green.

A rolling ladder offers easy access to upper pantry cabinets (things like extra paper towels and small appliances are stored there) that span all the way up to the 10-and-a-half-foot-high ceilings. Oddly the utilitarian feature (a mainstay of the company’s Shaker-inspired kitchens) isn’t De Gasperis’s favorite thing about the room—that would be the glass-enclosed hutch. “It’s just so practical,” explains the designer of its convenient location on the countertop. “A lot of people opt for open shelves or uppers, but this works better for everyday plates and glasses. It’s probably my most-used cabinet.” Hidden within the banquette bench: storage for lesser-used cooking tools and holiday entertaining-ware.

You’ll be hard-pressed to find a recessed light anywhere in De Gasperis’s house. “It just cannot happen,” she told her contractor when they started reviewing lighting plans. “I have an aversion to pot lights.” In her Toronto childhood home, she recalls only ever using candles and the occasional softly dimmed table lamp to light the way. “I like mood lighting at night or on a gloomy day,” she says.

Her picks strike a balance between practicality and aesthetics. The shadeless sconces in the kitchen throw plenty of light so she can clearly see everything she’s cooking, even in the evenings. On the other hand, the antique tulip-shaped ones on either side of the living room fireplace take the place of artwork. “I love for the fixtures to be that sculptural piece within a space,” she says.

The powder room’s limestone basin was a score from Spain, sourced on 1stdibs. But the inspiration for the ultra-heavy addition (it’s secured into the wall’s framing with a wood base) actually came from southern Italy, where De Gasperis’s family is originally from. “There’s a lot of masserias there (old farmhouses), and they all have these stone sinks,” she says. The built-in soap dispenser elevates the setup (plus a regular old bottle would topple over on the rocky surface).

Steering clear of a theme-y Victorian look, De Gasperis drew on modernist greats like Le Corbusier and Eileen Gray, masters of stripped-back design, for additional inspiration. “I’m not one to throw 15 cushions on a sofa,” she explains of wanting to juxtapose the old-world feeling of the walls with fresh materials and clean lines (peep the fluted glass shower-door panels).

“I love design that looks like every detail was thought through and crafted slowly with careful consideration over years,” she explains. “I started from observing, listening to, and celebrating what was already present in the space.”