A Dreamy London Townhouse Filled With Wildflowers and Whimsy

The home of style maven Leith Clark is a magical cocoon of florals, with a touch of gothic glamour. 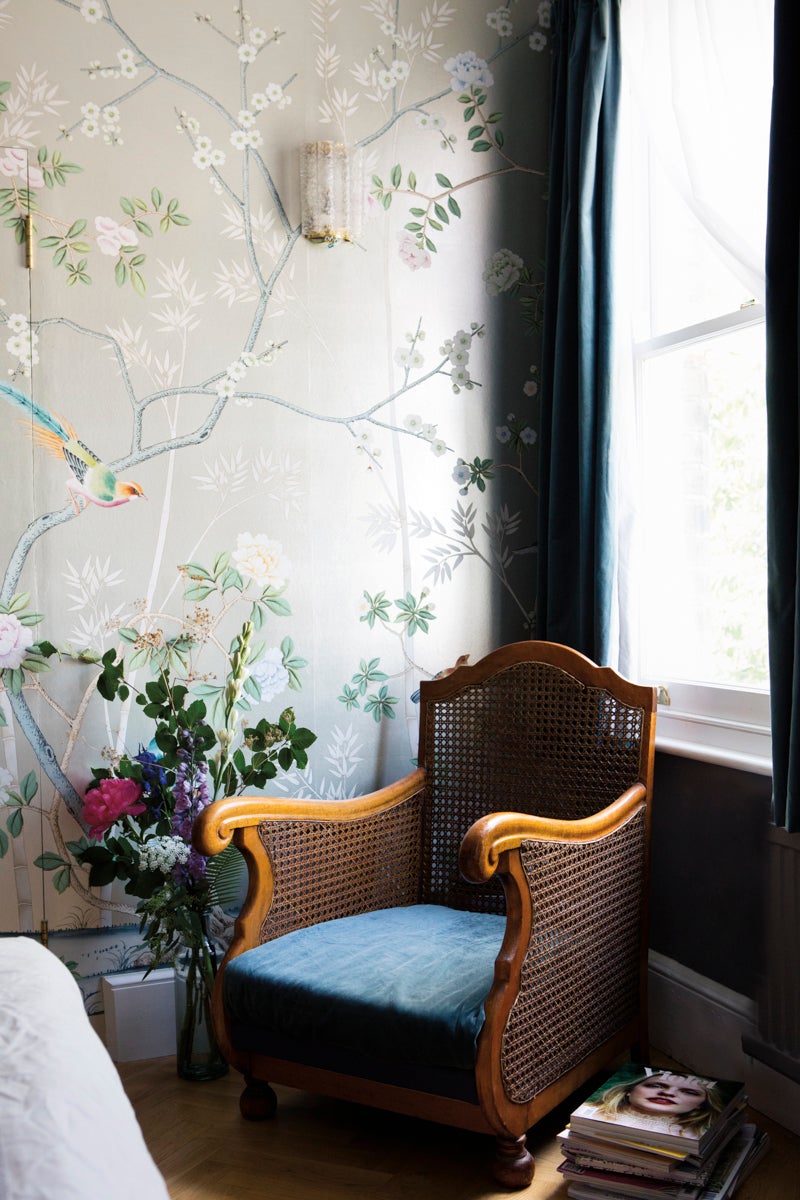 A vintage cane chair in the bedroom was picked up at Brick Lane Market when the couple first started dating. “James carried it for blocks and blocks over his head to the car. It’s so heavy,” says Clark. The hand-painted de Gournay wallpaper is “maybe my favorite thing in our house—definitely the most luxurious!”. Skye Parrott

Never mind that Leith Clark has been named one of the 25 most powerful stylists in the world, or that she’s collaborated with Mario Testino, David Bailey, and Bruce Weber. Never mind that years ago, after working as an assistant at British Vogue, she founded Lula—a glossy, high-fashion tome featuring such style icons as Marianne Faithfull and Kirsten Dunst—or that she is currently the editor of Violet, a less ﬂouncy, more intellectual take on femininity through the lens of growing older.

“At this stage in my life, I want to learn about the women who make me look forward and inspire me,” she says.

The aforementioned credentials might lead one to believe that Clark is a black-sunglasses–clad, couture-obsessed cliché of Anna Wintour–like proportions—but nothing could be further from the truth. Soft-spoken and unafected, the Canadian-born powerhouse is a green tea-drinking homebody who prioritizes spending time with her family (husband James Hatt, a production designer, and 3-year-old daughter Astrid) when not traveling the world styling clients such as Keira Knightley and Zoe Kazan.

“We’re both very busy, so we try to do a lot of chilling and reading at home,” she says. “Astrid loves to paint in the garden and play her toy piano.”

Clark laid down roots in London after meeting Hatt on a production job more than a decade ago. “We’re both visual and creative people, but we have different tastes,” she says. “If our style was a Venn diagram, there would only be a small crossover.”

One such aesthetic meeting point is their ﬁve-bedroom Victorian townhouse. Located ﬁve miles north of the city in Stroud Green, the area has all the quaint, small-town trappings that appeal to Clark’s romantic sensibility. “At the end of our road is a shop that sells champagne, and across from that is another that sells green juice,” she says, laughing. “What more could you ask for?”

Because the property required ﬁve months’ worth of work, the family moved to a barn in Surrey while Astrid was still a baby. Every detail of the renovation was a labor of love and a chance to incorporate Clark’s affinity for dreamy, woodland-inspired patterns and textures.

“We found vintage ’70s Liberty peacock-printed fabric at Kempton Market and upholstered all of the closet doors with it,” says Clark. The surface above the front stairs is adorned with an ethereal House of Hackney wallpaper, while a de Gournay chinoiserie panel holds court across from Hatt and Clark’s bed.

“I became obsessed with the brand when I was styling a Chanel ad,” she says. “It’s the most extravagant thing we’ve done for this house. Every morning we wake up to a wall of birds and leaves.” Astrid shares her mother’s love for all things ﬂora and fauna; in her bedroom is a printed rug that Hatt had made from a photograph of a daisy ﬁeld. “She is always picking wildﬂowers on her way back from school and putting them in glasses all over the house,” says Clark.

Also peppered throughout the space are treasured artworks and curios—an oil pastel drawing of witches hanging above the ﬁreplace and a portrait painting by Yelena Yemchuk propped at her desk. Being surrounded by the collection of whimsical pieces keeps Clark feeling engaged and creative. Most of the time she works from home, in her bedroom or the dining room, where “the light is the nicest and there is a record player.”

This fall, she launches a new clothing collaboration with Orla Kiely, inspired by Queen Elizabeth II, the Bloomsbury sisters Virginia Woolf and Vanessa Bell, and bohemian aristocrat Penelope Tree—and “what it would have looked like if all these women had met.” Otherwise, Clark is busy commissioning and editing stories for Violet, pulling references for the red carpet, planning press tours for clients, and curating mood boards.

But when it comes to describing her aesthetic, she refuses to put words to the unique style she has cultivated that speak to the top names in fashion. “As soon as you say what you are, then that’s what you are,” she says simply. “If you don’t say it, you can bend it and alter it and change it.”

But one thing is certain for the ever-evolving visionary: “I’ve always been drawn to beauty.”