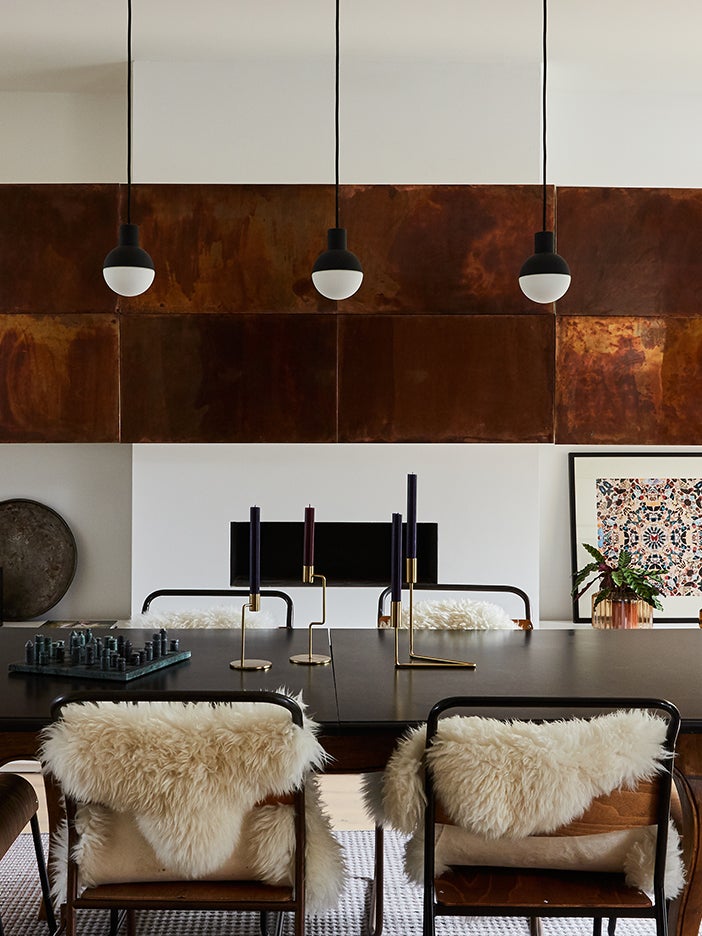 Interior designer Emma Gurner, founder of design studio Folds Inside, and her husband, Rob, were growing desperate. In the summer of 2010, their offer on a dreamy period home in the leafy London neighborhood of Finchley had fallen through in the eleventh hour, and they’d already sold their current place. “We were also going on vacation the next day,” the designer says. No pressure.

In a Hail Mary, the couple wound their way through town tacking letters to doors in hopes that someone would sell. Luckily, the owner of a 115-year-old Victorian with a stained-glass front door and oversize windows just happened to be gardening at the time. Shortly after striking up a conversation, the pair were being shown around. The inside of the 2,300-square-foot house mirrored the grandeur of its exterior: A handsome marble fireplace stood in the living area and high ceilings soared above. “I fell in love with the space, and the rest is history,” says Gurner.

Since moving in, the designer’s go-getter attitude hasn’t waned. In fact, she hasn’t sat still. Gurner has replaced the floors, moved doors around, painted the walls…the list goes on. The couple and their two daughters outgrew their dining table a few years back, but instead of tossing it, Gurner had a local carpenter furnish it with a larger top. It isn’t the only element in the room that shows off the designer’s flair for coloring outside the lines, though. The nearby copper-wrapped cabinets further display her ingenuity—and handiness.

“I absolutely love how the gorgeous verdigris copper develops over time, so I sped up the aging process by coating some metal sheeting I got from a hardware store in Liver of Sulphur,” says Gurner. She applied the substance in different ways—dripping, rubbing, brushing—to give the panels a varied tarnish. “Once I was happy with the look, I sealed them with beeswax and had my carpenter mount them,” she continues. The supplies cost her $150, and the install was $2,600.

It’s nearly impossible for Gurner to resist shopping for herself while furnishing her clients’ houses—so she doesn’t. Instead she relies on a few simple styling tricks to keep her ever-growing collection of pottery, busts, and artwork from ruling her roost.

“I keep all of my collectibles on a pair of étagères, and I cluster similar things together to help them feel cohesive,” she explains. Metallics stand in groups; yellow items stick close to one another, etc. Keeping the walls behind the displays white further prevents them from exhausting the eye.

Gurner shows off her ability to embrace madcap design in the powder room, a fun-size space donned in dueling wallpapers from House of Hackney: an enveloping jungle at eye level and a pattern inspired by a 17th-century rug down below. Between, a blushing pink chair rail plays matchmaker.

advertisement
**“** I thought it would be fun to make a big statement in the smallest room of our house.”

“I thought it would be fun to make a big statement in the smallest room of our house,” she says. While the wallpapers are totally different styles, they’re both underpinned by the color pink so the pairing works. “I made doubly sure the room felt cohesive by nuzzling the concrete sink by Warrington and Rose up to the tiniest of pink backsplashes,” adds Gurner.

Her daughters, Florence and Darcey, were both under the age of 10 when the family moved in, and their bedrooms were decorated accordingly. Think: stuffed animals and toys. Recently, Mom worked alongside the duo to give their spaces mature makeovers.

“Florence is 11 and has no shortage of opinions; therefore we talked through every idea together to make sure she’d love her new room,” says Gurner. To achieve the quiet, relaxing vibe she was after, the designer upholstered her headboard in cozy velvet and dunked the walls in Farrow & Ball’s Light Blue. “My teenager, Darcey, on the other hand, needed a bedroom that would energize and uplift her, hence the whimsical swinging chair and peachy color scheme,” she says.

Five years after moving in, the Gurners opened up the dining room to the living room and added a door to the garden off of the kitchen, which allowed them to replace the old garden entrance’s ornamental French doors with a window seat wrapped in birch plywood. The change-up instantly turned the space’s dimmest corner into its sunniest and most inviting.

“Everyone always wants to decorate their house from top to bottom right when they move in, but taking your time is the key to a tailored home,” says the designer. Why? Because only after living there for a while do you really know how you and your family use it. Bonus: Drawing out your timeline keeps your pocketbook from being stretched too thin.

To the naked eye, Gurner’s home appears quite polished, but the designer says there’s still room for improvement. Next up: the kitchen. She’s already enveloped the island in a punchy graphic tile from Darkroom. Now she has her heart set on pairing it with oak cabinetry and black marble countertops.

The online home store I have bookmarked: Rockett St. George.

The local interiors shop I can’t get enough of: Liberty London.

The most affordable thing in my home that gives me the most joy: My Debenhams sofa. It was a Black Friday deal and is the most comfortable sofa ever. There’s nothing better than cozying into it after a long day.

My biggest splurge: The painting by André Lundquist that hangs above my fireplace.