If this isn’t a fresh spin on rustic suburban living, we don’t know what is. 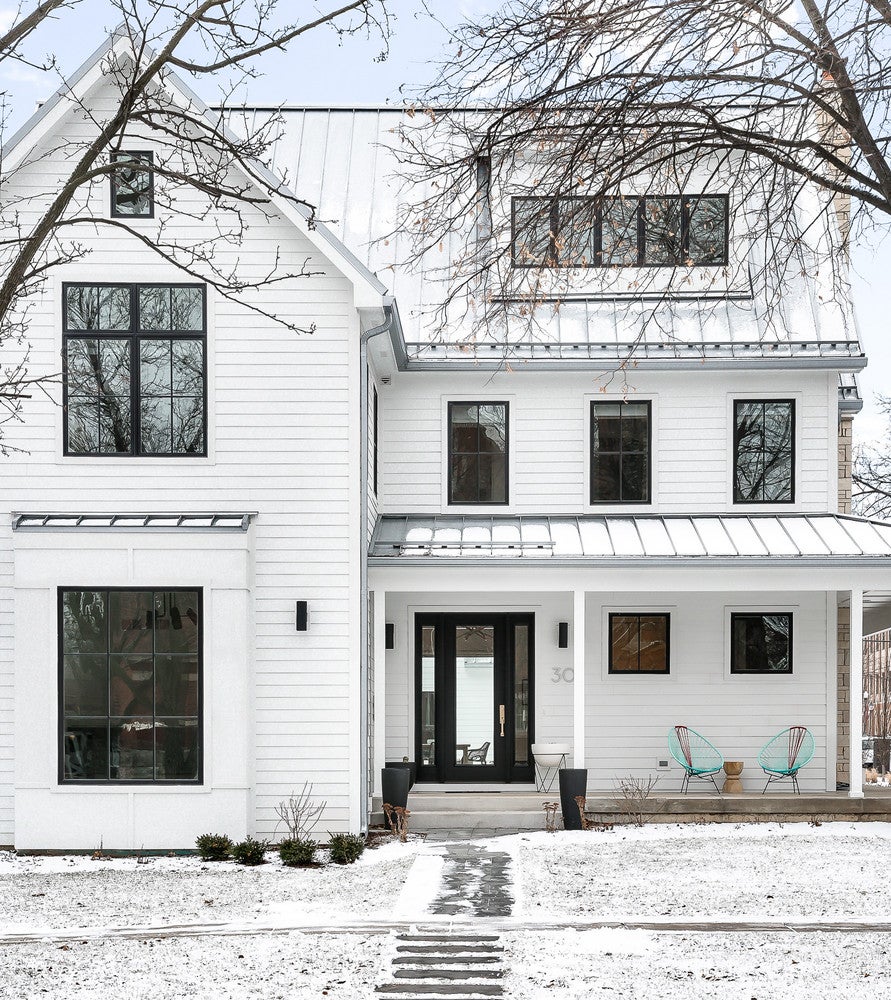 When longtime city-dwellers Elizabeth Diomede and her husband, Mark, decided to move their family of five from Chicago to the suburbs, no neighborhood screamed “new beginnings” quite like Naperville, Illinois. Prized for its stroll-worthy streets, vintage appeal, and colorful farmhouses, the couple was instantly charmed by the town’s much-loved Historic District. However, rather than settling on a sweet fixer-upper, the duo went all in on an empty lot—a rarity in the area.

“Years before we purchased the land, a historic home existed but was torn down due to complete disrepair,” Diomede tells Domino. “The biggest challenge was marrying the Historic Preservation architectural guidelines and restrictions for the exterior with our more modern vision.”

As an interiors pro herself (Diomede is the founder and principal of Diomede Design), you could say transforming the blank canvas into her family’s forever home was her dream project. Though farmhouse at first sight, the home’s interior subtly straddles the stylistic boundaries between Scandinavian, mid-century modern, and minimalism. Consider this sleek suburban retreat solid proof that sliding barn doors, matte black accents, and ultra-mod furnishings can peacefully coexist.

Unless you’re living in the edited world of reality television, you know the building process is anything but speedy. With the help of the creatives at Torch Architecture, Diomede and her team officially broke ground in the spring of 2016. Fast forward ten months, and the home is nearly complete. Though, even with close to a year’s worth of construction in the books, it’s the preparation and patience that goes on behind the scenes that counts when you’re building on protected land.

“The planning and approvals took almost as long as the build,” says the designer. “Looking back, I would absolutely build new again or do an extensive remodel because I love interior design, however, it was difficult to fit within a mold that was expected in the Historic District, especially when dealing with architecture. I wasn’t fully prepared for that aspect.”

Wanting to stay true to the traditional architecture without sacrificing her personal sense of style, each design decision—large and small—was made with a curated fusion of aesthetics in mind.

“Any rustic element that was added, was done in a modern, sleek fashion,” explains Diomed. “Instead of using an unpolished concrete countertop for the island in the kitchen, I opted for polished. For the metal railings, I designed a more minimalist configuration. Even the shiplap is a little wider than your typical width used on the walls.”

No matter how you label it (Scandi-meets-traditional? Minimal-meets-Midwest?), the crisp white abode is simplicity at its finest. Sticking with a “less is more” ethos, Diomede’s keen eye for negative space and refined color palette impart the home with a sense of balance and ease. While serene, whitewashed moments (peep the enormous, eat-in kitchen and light-filled laundry room) leave a strong impression, elsewhere, dramatic splashes of color prove their worth in the from of accent walls, accessories, and lighting.

“I love white. If I could do everything in white, I would. That’s evident,” jokes Diomede. “However, I do like a bold room to offset the monochromatic appearance of white through the rest of the home.”

Refreshingly dark and unapologetically moody, you can file this serene powder room under reasons to love black shiplap.

While her knack for neutrals is evident, that doesn’t necessarily mean Diomede is one to shy away from stronger hues. In one of her boys’ bedrooms, a sunny burst of yellow instantly charms the dwelling’s two-toned walls.

“My son, in particular, loves a color palette of orange, yellow, and red: Happy colors. But there’s nothing that scares me more,” says the designer. “That was his one request, so I sought out a funky yellow that I’ve now grown to love.”

Each its own lesson in restraint, Diomede opted for a fairly minimalist scheme in the kids’ rooms. Shying away from too-busy patterns or theme-y decor, she wanted the spaces to feel fun, yet versatile; ensuring they would grow alongside their ever-changing tastes.

“I try to focus on a few fun items that reflect the kids’ personalities and the rest I keep neutral,” she says. “It’s also an easy, affordable way to swap out small decorative items as they grow older. I prefer good, quality furniture so we are not replacing too frequently and I love adding built-in storage in the closets (ideally shelving and drawers). It helps keep the clutter at bay and the style very clean.”

Despite the home’s fairly large floorplan (the primary living spaces span 4,300-square-feet), clever built-in storage is an absolute when you have three little ones running around. From a sweet, secret book nook in the living room to an industrial-inspired entryway bench, the home is filled with savvy, unassuming fixes to keep clutter under control at all times.

“The built-ins provide the opportunity to appear as minimalistic as possible, yet create a sense of warmth,” she explains. “The children have their designated lego and Magna-Tile building space to be as messy and carefree as they’d like. I make it mandatory to declutter and donate every four months even though we have the built-in space.”

Is this ultra-edgy fusion the next big wave to hit farmhouses? We can’t yet say for sure, but we’re secretly hoping it is.