In the wilds of upstate New York, Patrick Robinson ﬁnds the perfect setting for creating his ultimate work-life retreat. 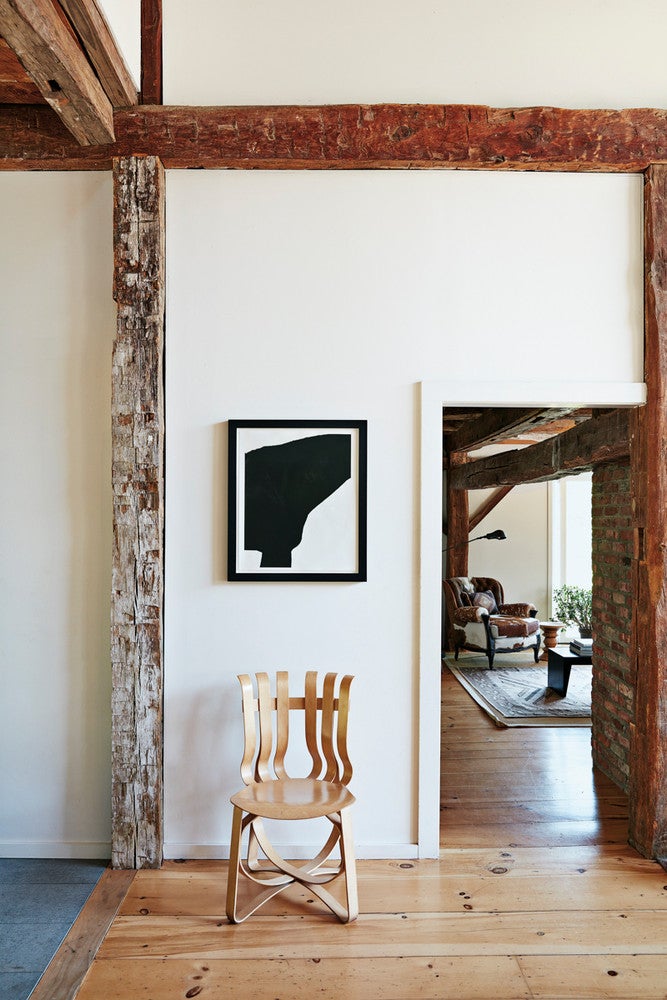 A cattle barn isn’t the first place you’d expect Patrick Robinson to call home. But then again, the founder of travel clothing line Paskho (and former design lead at Armani Exchange, the Gap, and Paco Rabanne) is full of surprises. Case in point: At age 10, he taught himself to make garment patterns from newspaper and is presently crafting a Chris-Craft-style barrel-back boat by hand.

So when he and his wife, Vogue fashion and accessories market director Virginia Smith, looked for a house to regularly escape Manhattan, they searched not in East Hampton or Martha’s Vineyard but rather in the country (of the farm variety).

[In this image: Robinson works from the light-filled loft space upstairs, surrounded by hundreds of books that he organized by color. “That’s the only way I can remember where to find something,” he says. Fronzoni ’64 Table and Chair by A.G. Fronzoni, Ambient Direct, $893-$2,290.]

“We were obsessed with having a barn,” explains Robinson. “People kept showing us converted buildings that had covered up the original wood, so we kept looking.” For him, that was the whole point: to create a livable space that celebrated nature and brought the outside in. They eventually found exactly what they hoped for in Ancram, a tiny, bucolic town in Columbia County, east of the Hudson River.

When Robinson and Smith bought the eight-acre property in 2003, it only had a cow barn, silo, chicken coop, and turtle-filled pond—plus a seemingly endless thatch of weeds and wildflowers. They renovated the barn, which was built in 1856, preserving its original skeleton and idiosyncrasies, including a 70-foot-high open center and low-ceilinged side wings where the cattle stalls once were.

New York design firm Bonetti/Kozerski led an expansion project in 2010, keeping the original, untreated beams on display—in some places so low they still require a ducking maneuver. Despite all the dark wood, light streams in from seemingly every angle of the house. “There are so many windows that you feel like you’re in nature,” Robinson says. “And the wood inside connects you to the woods outside—it’s like an infinity loop.”

Touches of the Robinson-Smith fashion DNA mix in seamlessly: hand sketches by Manolo Blahnik, photographs by Herb Ritts, family portraits by Patrick Demarchelier and Norman Jean Roy—all adding up to a place in which refined inspirations and rustic ease coexist.

[In this image: The barn house is still a work in progress, according to Robinson. The next big project: “Taking it off the grid, with a mix of solar and Tesla batteries.” Berta Coffee Table, E15; Plopp Stool, Oskar Zięta, $700.]

A quarter mile down the road, the next design project awaits. Robinson recently bought—what else—an old goat barn. It serves as the warehouse from which he ships packages to customers daily to keep up with demand. (Paskho—the word comes from the Ancient Greeks, meaning “passion”—is designed for exploring the world, and each piece of clothing is made from reclaimed fabrics.)

Robinson may keep the space as is or modernize it later on, but for now he is focusing on the business. “I see there are no limits,” he says of the house and its expansive environs. “I come here to think and figure out how to make things bigger.”

This story originally appeared in the Winter 2017 issue with the headline Country Mode.