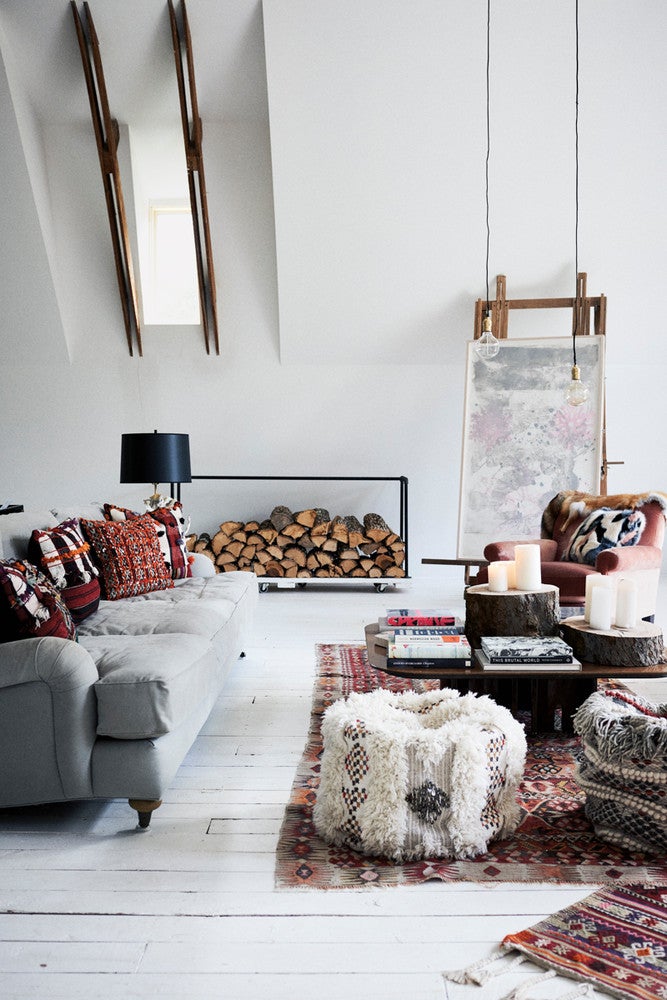 A walking commute is a veritable luxury in New York City. But for

the British-born cofounder of the glam fashion brand Marchesa, the 22-block route from her family’s Hell’s Kitchen apartment to her West Chelsea design studio slices straight through the real-estate boom of the Hudson Yards project, which has its own heavy-metal soundtrack.

“You can’t talk to anyone on the phone, it’s so noisy,” says Craig. It’s enough to drive someone off-kilter—or, more sustainably, upstate on the weekends, which is what the designer and her husband, Piers North, along with their two young daughters, now cherish as routine.

Their love affair with Accord, a picturesque hamlet two hours north by car, dates back to when Craig was pregnant with their oldest, Delilah, now eight. Regular visits to see friends schooled them in the art of the unwind, spurring daydreams about a place of their own. Uninspired by a round of showings, they perked up when they learned that the price had dropped on a converted 1920s barn, set on a wooded seven-acre plot.

[North and Craig with daughters Delphine (top) and Delilah.]

“I remember turning into the drive, and my husband and I looking at each other like: Oh, God, this is going to be the one, isn’t it?” Craig says with a laugh, recalling the swirl of excitement and dread that comes with a budget-testing purchase. “Somehow we were going to make it happen because it was just so magical.”

And so full of potential, which is code for a laundry list of projects that have unspooled over long weekends and holiday breaks. Chief among them was the barn’s second story, which had been weatherproofed but not properly insulated, leaving it uninhabitable in winter. Craig traces that quirk to the original conversion, in the 1980s, by owners who had grand plans of turning the place into a theater and dance studio.

For Craig and North, a creative director, renovating that upper ﬂoor meant doubling the house’s footprint and reclaiming the open-plan lifestyle of their previous Manhattan loft. At one end sits the children’s play zone, with cozy sofas draped in vintage suzanis and a work surface (an incognito ping-pong table) topped with a hand-sewn American ﬂag (nearby, a weathered Union Jack hangs on the wall in a nod to the couple’s home country).

Across the room, the more formal seating area invites all-day lounging, with a mix of Moroccan-style poufs, a deep-dish sofa studded with Turkish pillows, and a large-scale painting by longtime friend Charles Lahti.

[A cozy corner is outfitted with plush patterns in an Indian pillow and a Pakistani rug. “As a textile designer, I get the most inspired when I can mix strange things together that may not necessarily look good,” says Craig of her exploratory approach to decorating.]

provides a blank canvas for Craig’s adventurous decoration, born of a lifelong fascination with South Asian and Middle Eastern textiles. She cites the lushly layered interiors by Edouard Vuillard (her grandmother’s favorite painter) as early inspiration, along with a lineage of family artists, though it was a months-long stretch in India during art school, spent studying traditional block printing, that cemented her taste for the collage-like effect.

“They used to lay the fabrics outside on the ground, and you’d see all those different prints drying in the sun,” Craig recalls. “That’s where my true love of color, pattern, and play came from.”

[A claw-foot tub in the master bath is meant for unhurried weekend soaks.]

If the house stokes a certain aesthetic freedom and laid-back approach, it carries over into everyday life. The master bath’s claw-foot tub, a steal discovered in Florida, outranks an expedient shower “just because you don’t have that sort of ticktock, ‘Ooh, I’ve got seven other things to do,’” Craig explains.

[Craig and North repainted the kitchen cabinets a deep gray (Astronomical by Behr), and installed mid-century pulls, while the antique glass-front cabinet adds a lighter touch.]

Her newfound passion for dinner parties, where family-style menus often take a page from Yotam Ottolenghi’s Middle Eastern–inﬂected cookbooks, came with a lightbulb moment. “I always thought I hated cooking, and then I realized I just hate doing it in a rush,” says Craig. With the stage set for casual entertaining, guests might be treated to an impromptu performance: “When we have people over, we put on music—the girls love to dance!”

In Craig and North’s bedroom nook, a violet-hued suzani from Etsy lays the base for richer patterns and colors.

The Art of Assemblage

“I’m obsessed with vintage shopping,” says Craig, who seeks out a market wherever she travels. Lately she’s been drawn to Etsy. “It really is the global souk,” she notes, with the recommendation to double check size before purchasing. “Always keep a tape measure by your side, because scale can deﬁnitely be an issue.”

[North constructed the girls’ built-in storage and cubby-like beds, painting the insides pink, in a genius stroke of parental compromise. In this image: Curtains in Florette and India Fabric, and Dominique Duvet, Les Indiennes.]

For a richly immersive environment, integrate found fabrics beyond the two-dimensional bedcover or rug. Craig uses graphic suzanis, embroidered kanthas, and ﬂat-weave kilims to add another dimension to furniture and accents. She sourced pillows made from Turkish textiles to liven up a neutral sofa and covered a white armchair cushion in a vivid red-toned piece. Hanging block-print curtains to frame the girls’ beds was another way to incorporate her favorite fabrics into the space.

There are no rules when combining prints and patterns with conﬁdence. Craig suggests starting with one theme “that guides everything,” whether a shared palette—as seen in the midnight blue tones in her bedroom—or a particular design technique.

This story originally appeared in the Winter 2017 issue with the headline Material Instincts.

Inside the Domino Office, Where Good Vibes RuleA Minimalist Los Angeles Home Where Quiet Is KeyReese Witherspoon’s New Venture Is All About Empowering Women