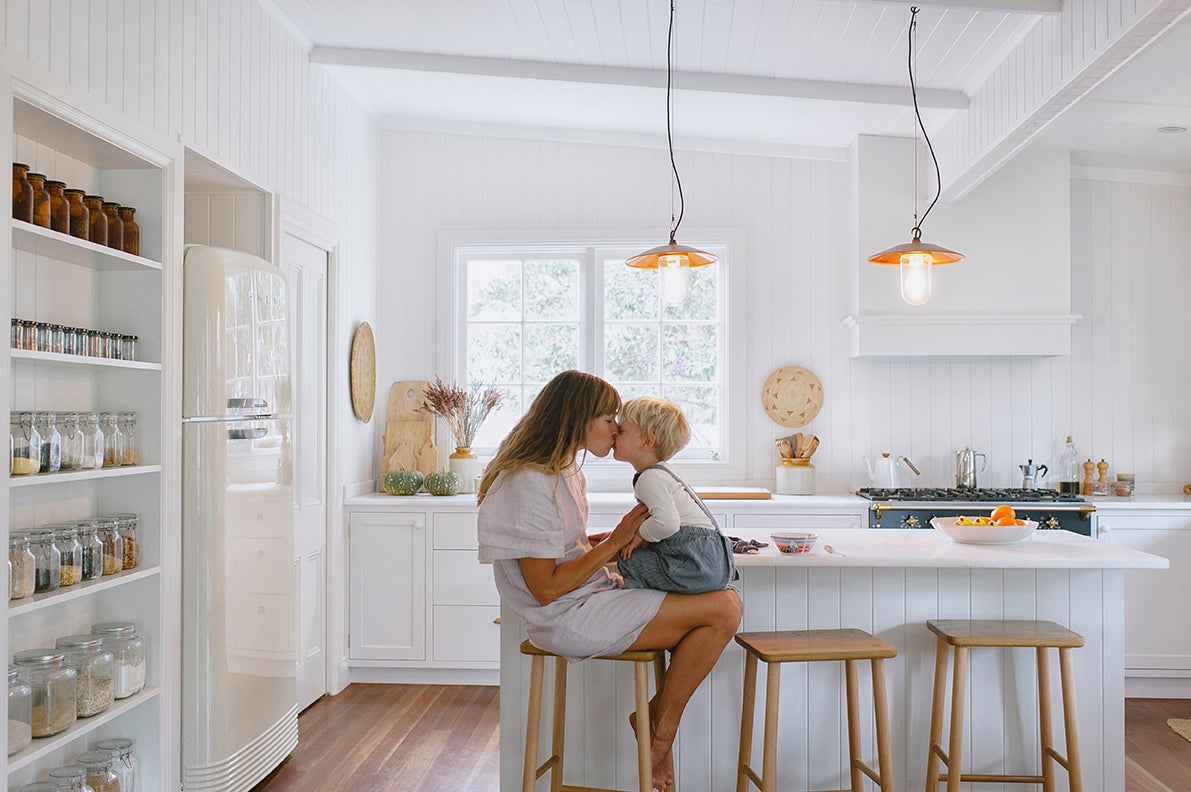 This story originally appeared in the Winter 2019 issue of Domino, titled “The Gang’s All Here.” Subscribe to be the first to receive each issue.

It’s hard to imagine Courtney Adamo’s home ever being anything less than picture-perfect. But when she and her husband, Michael, first found the 120-year-old property they would eventually buy in an idyllic town north of Sydney, Australia, it was a diamond in the rough.

If you recognize her warm smile and laid-back chicness from Instagram, where she regularly shares sunny snapshots of her life with Michael and their five children, then the image of Courtney falling in love with a Federation-style cottage with aluminum-framed windows and asbestos paneling won’t track. Her reputation as an arbiter of well-chosen goods for the whole family (no plastic; thoughtful design) began with Babyccino, the site she cofounded in 2007, and interest in her intentional approach and lifestyle has only grown. Her obsessive and loyal fan base looks to her for the tips, tricks, and must-haves she leans on for living the good life. She responded by launching In the Loop in 2019, an e-course for parents wanting to know just how she keeps her home tidy, kids fed, and nutmeg-colored bangs trimmed—and still finds time to surf.

Part of the secret is her home base. When the Adamos first landed in Byron Bay three years ago, the storied surf outpost quickly won them over. The family was on an 18-month around-the-world trip inspired by their desire to downshift from their fast-paced life in London. “Within two days we all knew it was our spot,” says Courtney of the beach town. They just needed to find the right home to settle into. A for-sale listing popped up for a house down the road from their rental, and Michael encouraged her to take a look. Reluctantly, she agreed. “As soon as I stepped through the front door, I saw all the charm that I couldn’t see from the outside,” explains Courtney, who felt more at ease there, among the old, creaky sash windows and ramshackle doorknobs, than at any of the newer, more conventional properties they had been considering. At 1,600 square feet, “the home was too small for us, but I wondered if I could make it work,” she says.

It turned out she could—with the serious prioritization of a five-month renovation. Courtney had some experience in that department: The family had bought their old Victorian in Highgate, North London, in an “unlivable state” and restored it from top to bottom. She also made a resolute commitment to finding the exact right pieces for the space, as she’s always done. “Of course everyone has a different financial threshold, but when we need to buy something, we try to find the best quality available or the one thing that will last the longest, even if it is more expensive,” explains Courtney. “When an item is more dear, I treasure it more. I take better care of it and make sure my kids do, too, which inevitably extends its life span.”

At the top of her to-do list was sorting out the kitchen. True to houses of the era, it was small and centrally located on the first floor. But with a family as passionate about cooking and eating together as the Adamos, relocating it to the back of the building where they could spill out into the garden became the top order of business. “The kitchen is where we spend the majority of our time, so this was the room we decided to invest the most in,” says Courtney, who went with all custom-built Shaker cabinetry. The update not only gave the room the open airiness required for such a high-traffic and high-functioning zone, but helped create space to solve another issue: the one bathroom-to-seven-people ratio. A second bathroom now stands where the kitchen once was, making the most of a window that looks out onto a lush, green tree fern. Last but not least in a family with five kids: a laundry room. Devoting a section of the enclosed veranda did the trick, as did including a large butler-style sink for handwashing, a wood benchtop for folding, and a few cupboards for stashing away cleaning supplies.

What didn’t make Courtney’s list of reno must-haves is almost as surprising as the modest square footage. The thought of extra bedrooms beyond the original three didn’t even cross her mind. Turns out, her older sons Easton (14) and Quin (12) have always shared a room (and are so close they often choose to sleep in the same bed), as have her daughters Ivy (10) and Marlow (7), whose bunk beds “take advantage of the high ceilings and vertical space, and give them more room to play,” explains Courtney. The child who did need an area carved out was Wilkie (2), the only member of the brood to be born in Australia. The sunroom off the master transformed into a cozy sleeping nook.

Another issue of no concern? Storage. “When we bought the house there was not a single cupboard or closet,” says Courtney. “I don’t mind having very little storage because it forces you to keep only what you need.” Aside from building one closet in the girls’ room and another in the sunroom-turned-nursery, the rest of the clothes are kept in vintage dressers and wardrobes she has found. “My husband jokes that I can’t drive past a charity shop or antiques store without stopping to check it out,” she says. “Some of my favorite art on the walls I rescued for less than $5!”

It’s been just over a year since the renovation, and the Adamos have fully settled in. “Michael and I both grew up in a big family, so we’re used to living with noise and chaos,” says Courtney. “I love that at any given time in our house, there is a tower being built, food being cooked, tutus being twirled, art being crafted, music on, people laughing, someone crying, and sometimes all of it at once. A busy home is all I’ve ever known.”

See More Home Tours: Sarah Sherman Samuel’s Epic Fixer-Upper Is the Stuff of Reno Dreams What Does It Take to Make an 1850s Victorian Home Feel Thoroughly Modern? This Fashion Buyer’s Apartment Was Designed to Feel Like a Vacation