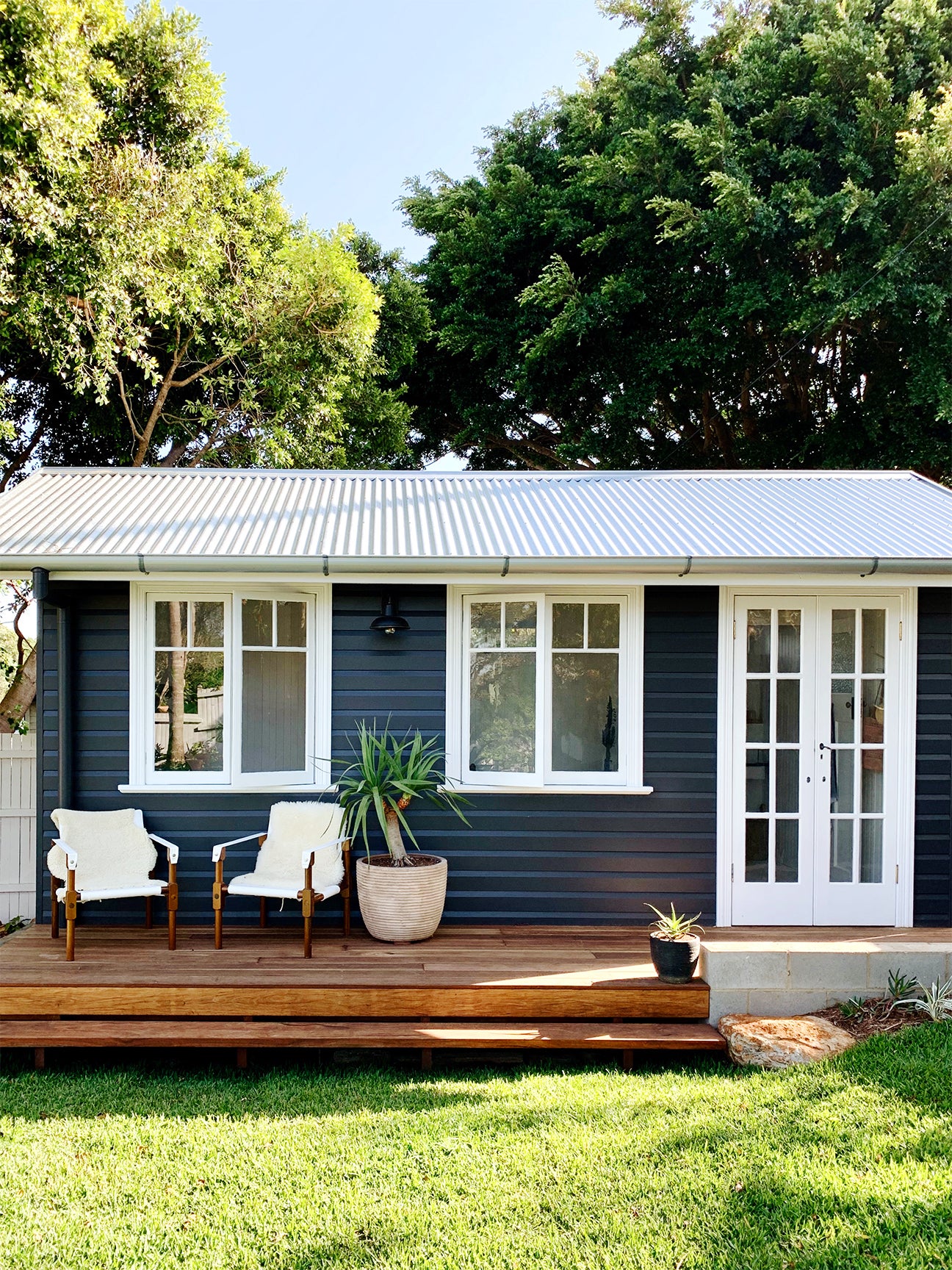 How does a big family make a small house work? They have an escape hatch. In the case of Courtney Adamo, the British blogger and entrepreneur behind kid-friendly lifestyle brand Babyccino, it comes in the form of a 200-square-foot studio erected under a stately fig tree in a little-used corner of her backyard garden. “It’s great to have that extra bit of space to retreat to, especially since Michael and I both work from home,” says Adamo, who lives with her husband and five children (ages 14 to 2) in a 120-year-old, 1,600-square-foot cottage in the suburban surf town of Byron Bay.

More than a mere workspace, the studio also doubles as guest quarters for visiting friends and relatives (Adamo’s mother recently spent a month there) and a bunkhouse for teenage sleepovers—her 14- and 12-year-old sons frequently hole up there with friends. Thanks to a versatile open-concept design and an airy whitewashed aesthetic, the room feel bigger than its small footprint. Here’s how Adamo turned a basic new-build shed into a multifunctional oasis that feels as though it has stood the test of time.

“Like the rest of the world, I just started pinning how I wanted the outside to look,” says Adamo of her inspiration for the structure. “I had a garden shed idea pinned for a long time, even before we decided to build it, and I kept coming back to that. And I knew I wanted the studio to be white because it creates a neutral palette to add your own accent to. It feels like a clean, modern take on a vintage look.” Adamo also opted for high ceilings and exposed rafters to make the space appear larger.

Give It a Sense of Place

Adamo wanted the studio to feel as though it’s always been there, so she chose materials that coordinate with her existing Federal-style home. On the purchase order were old doors and Queenslander-style casement windows from a local salvage garage; wall paneling that matches the kind in her house; and vintage-inspired details, including a retro-looking new bucket sink for the bathroom and a 1950s leather armchair for the living area.

Draw From Your Surroundings

The unfinished open shelving unit that separates the studio’s sleeping and living areas was reclaimed from two old oak trees on-site that couldn’t be salvaged.  “The roots were so invasive we had to cut them down, but we wanted to honor the trees as much as we could,” explains Adamo, who also had a desk and bathroom shelving made. “It’s really beautiful wood. It gives the space a sense of age and contrasts nicely with all the white.”

Though the house was inspired by barnlike simplicity, it has state-of-the-art features, such as solar panels and a tank that collects and reuses rainwater to irrigate the garden. There’s also an outdoor shower for post-beach rinses and energy-efficient galvanized-steel roofing to cut down on cooling costs. “It’s not quite off the grid, but we wanted it to be this self-contained little unit,” says Adamo.

Adamo incorporated natural textures throughout the studio, from the jute storage baskets and handwoven rug in the living area to the plants that creep down the shelving-unit partition. Paired with the space’s airy white aesthetic, the result is a seamless transition between indoors and out—perfect for a diminutive live/work space sitting pretty under the Australian sun.