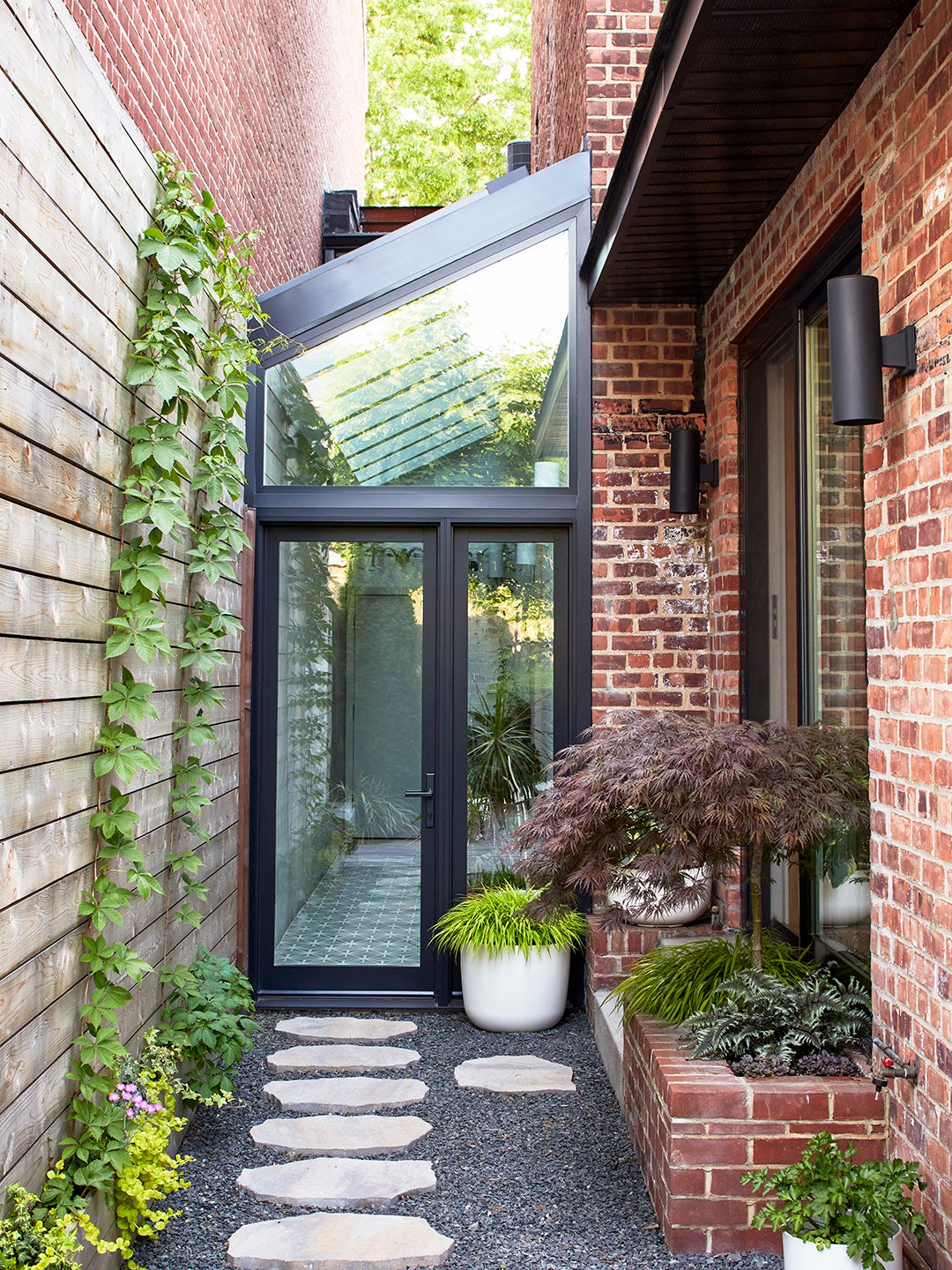 Cement tiles remind Dana Menussi of home. “They were a big part of the aesthetic of my parents’ house in Israel and of my surroundings,” says the fashion photographer–turned–interior designer. The part of Bay Ridge, Brooklyn, where Menussi and her hairstylist husband, Dan Sharp, and their two daughters, Lila and Elli, have lived since 2016 happens to have a large Greek community, so cladding their living room, kitchen, powder room, and breezeway in Mediterranean-inspired tiles from Cement Tile Shop only felt right.

“The first thing that drew me to this house was its width,” recalls Menussi. The circa-1950 property sits on a 30-by-100-foot lot, which by NYC standards is major, and its simple bone structure makes it feel more like a suburban split-level in Northern California. The family lived in the space for six months before moving into a rental to allow renovations to happen, which gave Menussi not only the chance to measure every inch and think it through but also feel the flow and observe things like how the light changes from day to night in certain rooms. “From the outside, it looks small and unassuming, but when you come inside it just gets bigger and bigger,” she says. “It’s a fun surprise.”

Not up for a DIY? Never fear: Kick-start your project with HomeAdvisor’s directory of general contractors in your area.

The house was a patchwork of previous renovations, additions, and reconfiguring of rooms, explains Menussi. “It was one of my missions to unify all of these elements, open up spaces, and bring more light into the home,” she says. Luckily they had an old tax photo of the property that showed the original black iron windows, so she knew she wanted to add them back in (all the windows and doors are from Kolbe Windows & Doors).

She also hung onto quirky spaces but gave them new purpose, like the side of the house that used to be the shed. She turned the breezeway into the new entry (it connects the house to the garage). The ceiling is pitched to one side and now comprises eight skylights—making it a hub for houseplants. “It lets you relax the minute you step inside,” says Menussi. It’s the place she and her husband take their morning coffee in the winter months.

Make Room Elsewhere in the Budget With an IKEA Kitchen

One major save: The kitchen is 100 percent IKEA (with the exception of the appliances). In an effort to maximize storage, Menussi opted for a wall model and a double island. The cabinets facing the dining table hold things like placemats and napkins, “so you can reach them while sitting and eating,” she explains. They also contain a “very important junk drawer” where keys, masks, and vitamins are kept. “This area is the main artery of the house, so it makes sense that all those things will be there,” says the designer.

Menussi prioritized function in the entry, too, adding a custom built-in drawer unit for her family’s shoes and a 15-foot closet. She splurged on a recessed handrail that lights up for the main stairs, so no one has to worry about tripping when they get up for a glass of water in the middle of the night. “It was a dream of mine since I was in my 20s and saw an incredible marble one at the Picasso Museum in Paris,” she recalls.

Take Advantage of the Rooftop

In the main bedroom, a step that cleverly disguises the radiator leads to a new outdoor terrace (previously just the roof of the living room). Wanting to keep any new additions out there as lightweight as possible, she went with plastic deck tiles from IKEA and groupings of planters from Design Within Reach.

Add Warmth From the Ground Up

Replacing the old wood parquet with ceramic tiles wasn’t just an homage to Menussi’s childhood—they work well with floor heating (one of her biggest splurges for the home). Given the living area sticks out from the rest of the house, with nothing else built around it, it has a tendency to get cooler.

Covering the bathroom all over in tile to create a calming feeling was surprisingly not a splurge (the little white hexagons were only $2 per square foot). Sticking to one material achieves a zen vibe, so your eye can travel from the shower to the tub to the window. “It all flows,” she says.