An engineering feat in the name of water views. 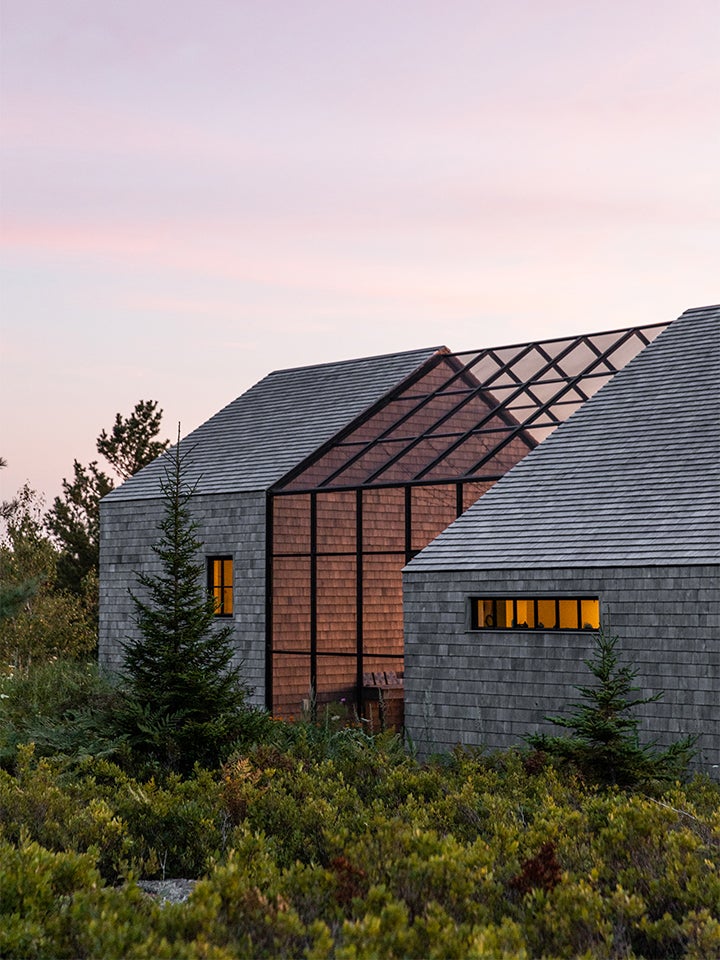 When Brad Horn and Maria Berman, the husband-and-wife architects behind Berman Horn Studio, discovered the perfect plot on Maine’s Vinalhaven island to build their summer house, their first thought wasn’t how to get a road or electricity up to the 20 wooded acres overlooking the cove. It was keeping the views. “We fell in love with this magical outcropping the way it was,” says Berman. “We almost wanted the house to be invisible, for you to see right through it.” Their solution? Split the 1,500-square-foot home in two. What looks like a glass structure connecting the main house and the guest quarters is actually an aluminum frame with 60 removable screens—the couple’s own invention.

“I feel like everyone has happy memories of being on a screened-in porch. It’s this universal cozy summer moment,” says Berman. The area is a safe haven from mosquitoes and other critters, but it also allows the family to enjoy uninterrupted views of the quaint lobstering community. Actualizing the porch was no small feat. The structure needed to be simple to install and easy to take apart in the winter, and all the parts would have to be delivered by ferry. “It took just as long to design the porch as it did the entire house,” says Berman. Here, she shares how they brought the vision to life.

Step one of the design process was figuring out what not to do. Knowing that glass panels would require a beefy framing system to support wind and snow, Berman and Horn took the material off the drawing table right away. “It would have been four times the size, not to mention four times the cost,” she says. The standard window screens can be taken out seasonally and weigh around 20 pounds total.

advertisement
“I feel like everyone has happy memories of being on a screened-in porch. It’s this universal cozy summer moment.”

The couple also decided to steer clear of steel, another heavy material that has chunky, curved edges, and opted for aluminum framing (only 400 pounds). The glue keeping it all together? Aerospace adhesive (the stuff that’s used to hold planes together). Unlike welding, which can leave goopy marks on the metal, this readily available epoxy has a sleek finish.

The pair used a fabricator on the mainland to assemble the framing, so the tricky part was transporting the pieces to the property. Fortunately, the metal working crew does a ton of marine construction in the area and has private barges. A team of three loaded the porch onto the boat in four parts, along with a small crane. Once they arrived at the property, it took two days to get all the pieces in place. (The poured concrete slab that runs underneath the house was already there.) “Then it was ready to go,” says Berman.

The 60 slide-in-slide-out screens are designed to assemble and disassemble in about an hour (with the help of a ladder, of course). Horn and Berman take the pieces out before winter and put them back together in the springtime. The doors on either side of the structure, one of which leads out to a wood deck overlooking the water, also come off. “It’s just a part of the seasonality of the house,” she says. So far, they’ve only had to replace one or two screens, and not due to bad weather, but because of their cats. “I know, at some point, someone’s kid is going to run right through one of them,” says Berman, laughing. Fortunately, the panels aren’t precious (they each cost around $20).

advertisement
“We almost wanted the house to be invisible, for you to see right through it.”

When it’s warm enough outside, the porch acts as a dining room, a crafts area, and a yoga studio. For maximum flow, and so guests can putter around in the early morning, the couple will leave the doors that lead into the main house open. “It’s kind of like our summer living room,” says Berman. The space is outfitted with a dining table, vintage aluminum chairs, and a telescope. “There’s nothing more wonderful than being out there at night, looking up at the stars.”