Indoor-outdoor living at its best. 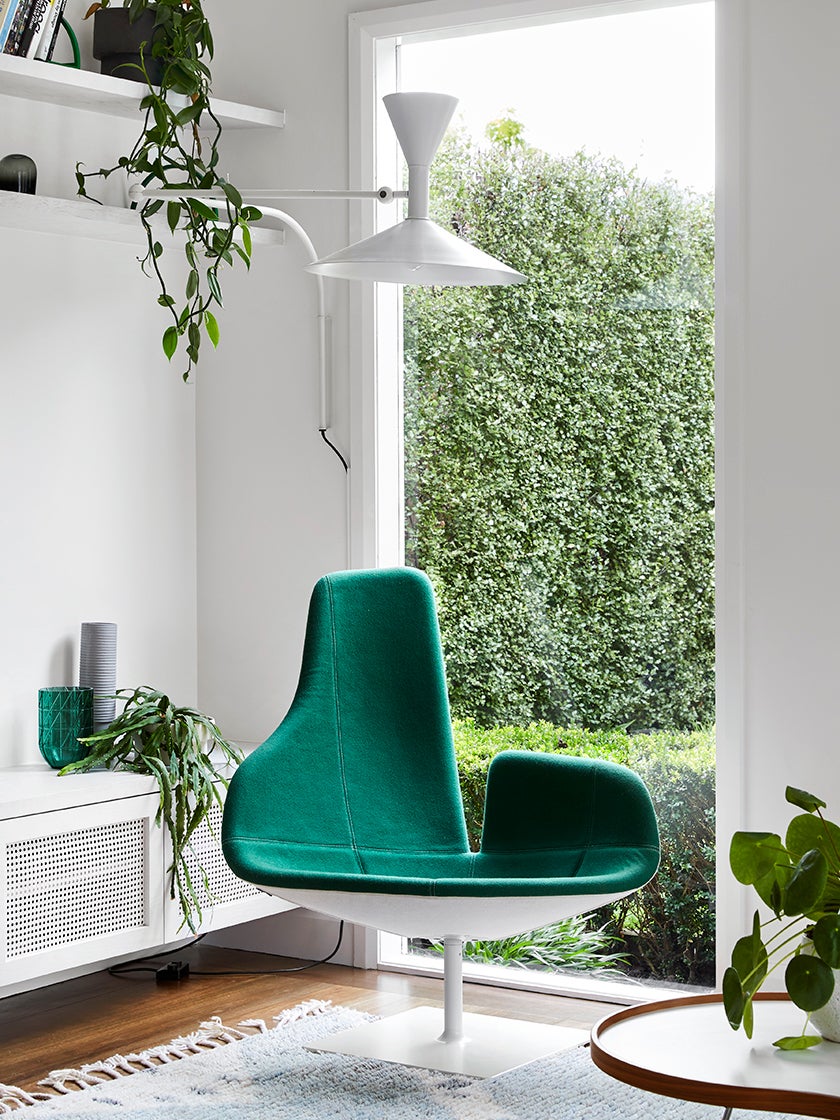 Who wouldn’t want to put a lush garden on display (especially one inherited from a previous homeowner)? When Lauren Li, designer for Sisällä, first spotted the large floor-to-ceiling windows in this California-style bungalow, she just knew the whole living room needed to be framed around the backyard. “We wanted to bring that green inside,” she says. It was a pretty natural decision to paint the space a fresh white and add in emerald accents and plants.

Her clients, a family who had spent years living overseas in China, had returned to Melbourne, Australia, to purchase their forever home. “They really love Chinese culture,” says Li. The family was starting from scratch but wanted to incorporate a few pieces picked up in their stint abroad. At the heart of it all: an antique red lacquer Chinese wedding cabinet. Instead of going over the top with Asian influences, though, the designer chose the fresh color palette to create a complementary contrast. Here, she shares how she created a monochrome room that honored the family’s travel past (without feeling cliché).

Originally, the fireplace was painted in burgundy. “It was pretty yuck,” says Li, especially alongside the existing cream-colored walls. A coat of white opened up the space and created the perfect background for playing with shades of green, starting with the mantel, which was covered in tiles by Anchor Ceramics. “It’s fresh, it’s fun, it’s not too serious,” notes Li.

Instead of pushing the palette to the extreme with a grass-colored couch, the designer opted for Brunschwig & Fils custom-made accent pillows. She was nervous to propose a bold green leopard print, but it worked: “It really just complemented the graphic pattern of the tile and the colors.” She paired it with a custom green zebra footstool to riff off the animal theme.

Li wanted to honor East Asian influences while avoiding stereotypes. She paired Chinese antiques collected by the family over the years with touches of contemporary Asian design, including items from Afteroom Studio and a Pilea Peperomioides, known commonly as the Chinese money plant, to bring good luck.

Pepper It With Plants

Without much effort, the plants do the work of both connecting the indoor to the outdoor space and tying together all the shades of green in the room. “We actually gave a couple of those plants to the clients as a Christmas present, and they have looked after them really well. They just add a bit of freshness,” says Li. Greenery was also one of the more collaborative areas of the design, with the clients adding to the collection long after the project was installed.

The standout feature in the room: this cozy corner, perfect for cuddling up with a cup of tea and a good book. “The client loves to sit there and read,” says Li. “That’s her special seat in the house.” The exceptionally comfortable Fjord chair is by Patricia Urquiola, while the Lampe de Marseille, extending from the wall, provides an ambient evening glow and makes for an optimum reading light. Whether illuminated by lamps or awash in generous sunlight, this living room’s eclectic marriage of fun and function makes it a true centerpiece of the home.

Discover more green spaces: The Green Marble Kitchen in This Melbourne Home Has Stolen Our Hearts This Tiny Bathroom Before and After Is Truly Jaw-Dropping The 8 Paint Colors Featured in Our Favorite Green Kitchens