Tour a Seattle Bachelor Pad Where the View Steals the Show

Warm wood and natural materials lend an earthy feel to the masculine space. 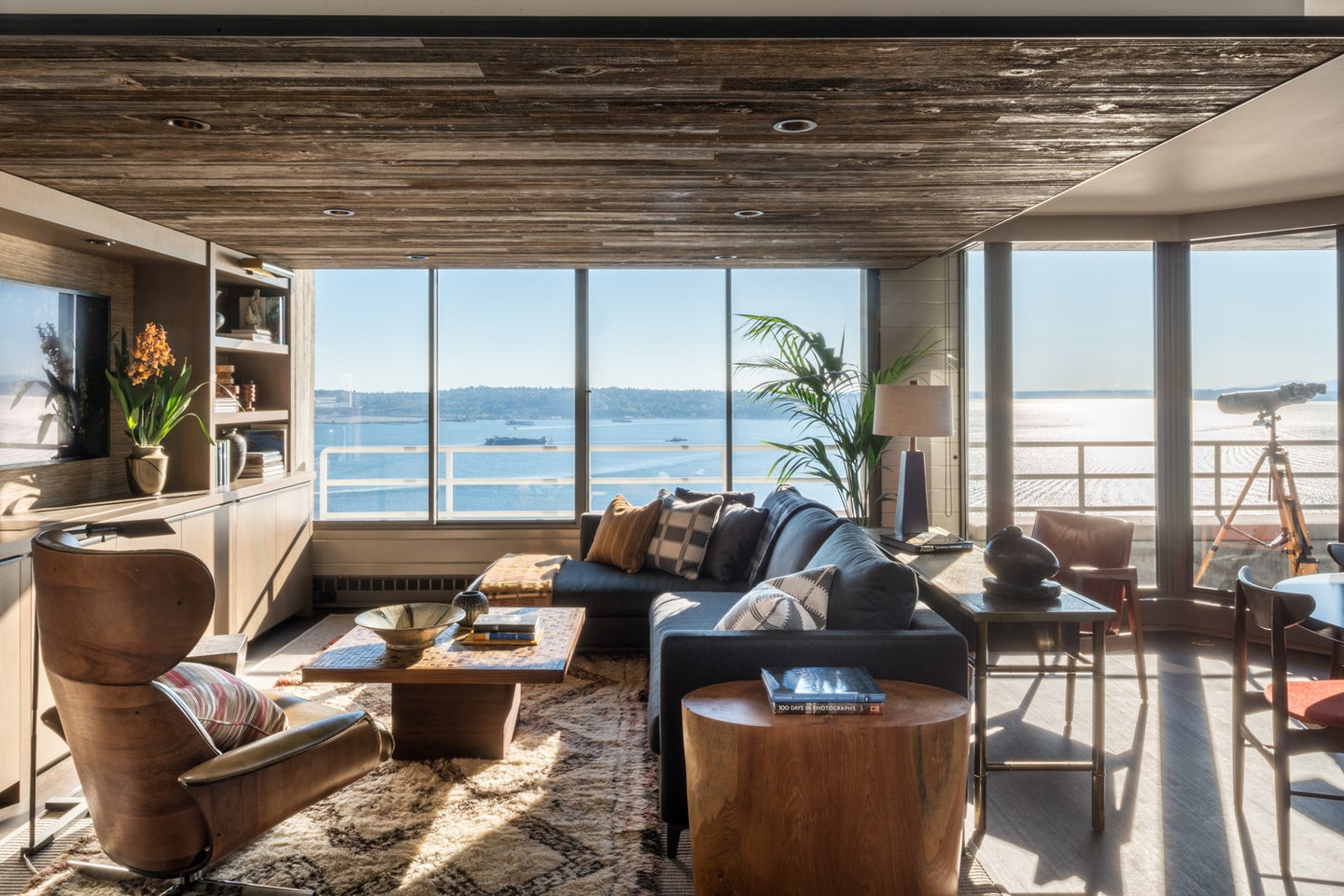 What does a typical bachelor pad look like to you? Are you picturing a messy space, lots of one-note browns, and a frat house-inspired feel? Well, it’s time to forget that vision, because a chic version does exist—and this Seattle apartment is here to prove it. Designed for a single client who had relocated from Alaska, the entire apartment was stripped to the studs and reworked with an open floor plan and a mixture of wood accents to create a space that’s both eclectic and casual.

For design and architecture firm Hoedemaker Pfeiffer, it was a desire to create an elegant look that still paid homage to the owner’s rustic roots that dictated the design and inspired the varied wood furnishings in different styles and textures, a sleek set of contemporary fixtures, and a warm color palette.

“It felt important to acknowledge the experience of a single man living in Alaska in the work we did: We wanted to invoke something that was respectful of his rural life without being patronizing,” Steve Hoedemaker tells Domino. “The feel was intended to be masculine, contemporary, and comfortable.”

As the view is the main event in the home, offering both coastal vistas and a city skyline, the design was meant to play off that without taking up too much attention. The client wanted an open floor plan that allowed for flexibility in terms of dining and entertaining, so warm woods with a variation on texture and color were used in order to differentiate each area from the next.

“The original 1980 layout [had] original finishes intact,” says Tim Pfeiffer of the original space. “The chopped up plan included two small bedrooms and a walled-in kitchen, all blocking natural light and the showcase views. The space actually felt dark.” Opening up the space allowed natural light to shine through, ultimately making room for more risks in terms of design.

In the den, a dark, textured wood ceiling is juxtaposed with a lighter sand coffee and side table, while the furniture pieces rely on weathered leather for a lived-in feel. A textured rug adds an element of coziness.

Strong attention to detail was also paid in order to make sure the areas looked cohesive enough to belong in the same house. “There is a decided juxtaposition of contemporary, modern, and vintage elements complementing these shared spaces,” explains Pfeiffer. “Though rustic, the 19th-century Japanese tansu, 18th-century kitchen table, and mid-century cane and leather kitchen chairs play well together amidst a very built environment. Natural woven fabrics and tribal designs reflect the client’s background and a regional vocabulary.”

The living and kitchen areas have a decidedly more modern look to them, with cooler hues mixing with more rustic elements for a fresh take on urban living. Warm reds, yellows, and oranges on a cream backdrop make sure the colors shine through, while still allowing that stunning view to take center stage.

The kitchen features a lighter mahogany on the cabinetry and ceiling, while the light gray base on the roomy island ensures that the natural wood doesn’t overwhelm the shared living spaces. All that wood might seem like it would make for a dark space, but Pfeiffer notes, “Even on the grayest of Seattle days, the space has beautiful light. The painted walls and ceilings in a warm white act as reflectors for the ample natural light, while the inclusion of hidden

in the kitchen and living areas deliver both task and mood lighting. Picture lighting adds drama and focus in the hallways.”

And as if that killer view wasn’t enough, there’s even a small outdoor terrace that leans toward a more modern look, playing off the exposed concrete structure of the building for a “deconstructed vibe.” “The tables are both heavy and functional, while the bench seating fabric and cushions feel integrated to the interior fabric choices,” says Pfeiffer.

Art also plays a huge role in the space, with the client’s collection spanning paintings, photography, and etchings in a multitude of different styles and colors. “In this fairly quiet palette, I wanted each piece to create a moment of thoughtful pause while building a graphic lexicon and visual narrative to complement the lifestyle of the client,” says Pfeiffer of integrating the pieces into the design.

In the bedroom, a multitude of throws and knits give the area a tranquil aesthetic, while the wood paneled walls add warmth. Strong emphasis was placed on the materials, while the color palette is the same as the living space, allowing for a cohesive feel throughout the home.

While the art catches the eye, the star of the show is the carved tansu chest and custom built-in shelving, which offers flexibility: It’s used for storage, art display, and the chest can be converted into a desk.

“The client is a decided outdoorsman and longtime Alaskan resident, so a layered lifestyle is second nature to him,” says Pfeiffer. “The rugs, throws, and plush carpet reduce formality, but increase familiarity and comfort for his private space.”

A strong desire was placed on creating a serene, yet inviting environment that allowed for a play on his personality. “For us, a really successful interior erases evidence of the designer when we walk out the door,” says Hoedemaker. “It should be the owner’s presence that is left, not our signature. Ideally, we want the apartment to look like a collection of well-curated objects from a life of travel, rather than a trip to the design center.”