Inside a SF Apartment That Reinvents The ‘Bachelor Pad’

There's not a dirty pile of laundry or obnoxious stereo system in sight. 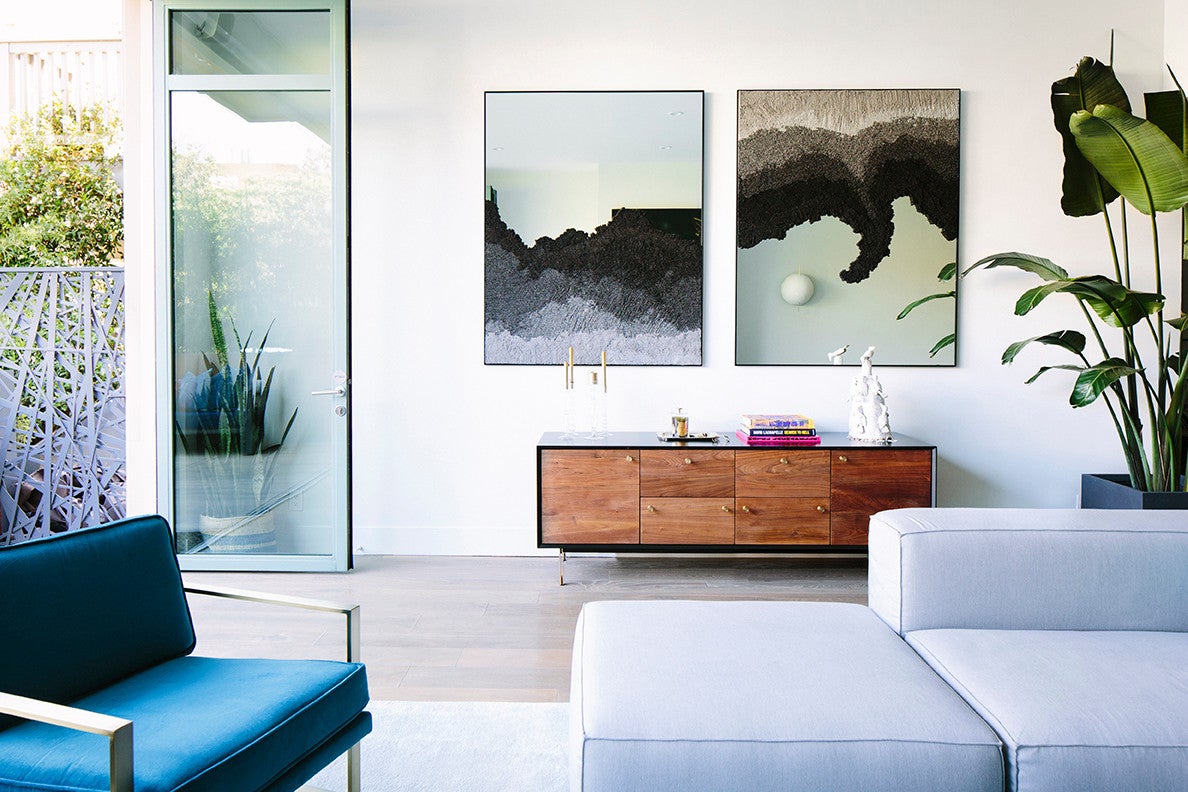 Overlooking San Francisco’s ultra-trendy Mission District, a not-so-average bachelor pad spearheaded by Cali-based designer Benni Amadi, serves as proof that even the most obvious of man-caves can feel bright, airy, and downright masculine. Filled with bold graphics and an eclectic art collection that lends a curated tone to the apartment, Amadi honed in on creating a functional space for her client—a tech maven in his early thirties who loves to entertain—all the while infusing her own edited eye for worldly textiles and vibrant hues.

“He’s very social and loves to host people over at his place, so the entertainment areas were the focus for him,” Amadi tells Domino. “Since this space is airy and full of light, I wanted to keep the décor simple, gender-neutral, and, honestly, a little more grown-up.”

The two-bedroom, two-terrace (yes, really) spread offers an understated lesson in layering and living in cohesion with the outdoors. Weather permitting, the home’s active host can expand both the main living room and the spacious master suite, revealing the plant-filled refuges that await beyond.

“Since his apartment has a great front terrace, we decided right away to put in massive accordion doors between the terrace and the living room. It’s a great dinner party apartment—and he has lots of those,” says Amadi.

In a similar manner, each of the rooms inside were thoughtfully designed to spark inspired conversations.

“He has a really sophisticated eye, and we wanted to focus on subtlety. We also wanted the color in his artwork to speak the loudest,” explains Amadi.

Riddled with refreshing pops of color, vintage collectibles, and large-scale art, the main living room is anchored not just by the statement-worthy pieces that grace the walls, but also by the smaller, intriguing accessories scattered throughout.

Along a bare wall where most might feel tempted to mount their TV, Amadi appointed two striking landscape-inspired pieces as the main focal point instead. Just across the room, an equally empowering print makes a dramatic statement above the fireplace. In order to offset the dark color story told by the owner’s most climactic artworks, the designer chose to balance the space with warm wood accents and brighter hues, like the mod console table and brilliant blue armchairs.

“I wanted to incorporate softer, more feminine elements and a little bit of shine to play off of the rugged masculine look of that piece,” she says. “It could easily dominate the room so we wanted to make sure other pieces felt important too, and weren’t eclipsed by either the size or the color of the artwork.”

Within the greenery-filled kitchen, inviting vintage rugs add an instant sense of coziness to the clean cookhouse, while also serving as an idyllic counterpoint to the moody, matte gray cabinetry.

The definition of funk and luxury, the master suite is sure to speak to both maximalists and refined bohemians alike. It may come as no surprise that the navy and white brushstroke wall covering served as the original muse for the now-artful dwelling.

“As soon as I found this particular wallpaper, I knew that it was so right for the bedroom; it’s masculine, interesting, bold, but not too loud,” says the designer.

To ensure the room still felt composed, Amadi chose her patterns and textiles carefully. “You don’t want to be stuck with all one color palette or the same texture,” she explains. “Introducing some variety is great for some visual diversity. You want coherence but not mundanity.”

Fun touches of orange introduce a sense of playfulness to the room, while a subtle weaving of boho-chic textiles maintain the room’s overall maturity.

In keeping with the rest of the home’s overall polished aesthetic, the spa-like bathroom sticks to a fairly neutral palette, while still daring to experiment with pattern and movement.

No space, however, quite compares to the personal garden just off the master bedroom. An urban oasis in and of itself, a Pinterest-worthy vertical arrangement frames the ultra-private pocket of peace and quiet.

“It offers quiet solace from the bustling streets. Our intention was to create an optimal environment for meditation and relaxation: A green oasis right in his backyard,” adds Amadi.

The design moment Amadi’s most proud of? The media room. Designed ultimately for comfort, each detail within this bonus lounge space, from the custom built-in shelves to shapely side tables, was chosen for its inviting sensibility.

“We designed a light-colored custom sectional for it and added navy linen roman shades,” she says. “The back wall is covered in reclaimed wood to make the room warm, and we custom-ordered a neon light for this wall.”

Much like this polished pad, The Mission is brimming with design-focused spaces, equally worthy of attention. The trendy neighborhood is now home to the city’s newest all-female clubhouse, The Assembly, as well as a slew of trendy eateries and shops.