This $7K Transformation Is What #VanLife Is All About

“It was a way we could take ownership of our lives. We went all in.” 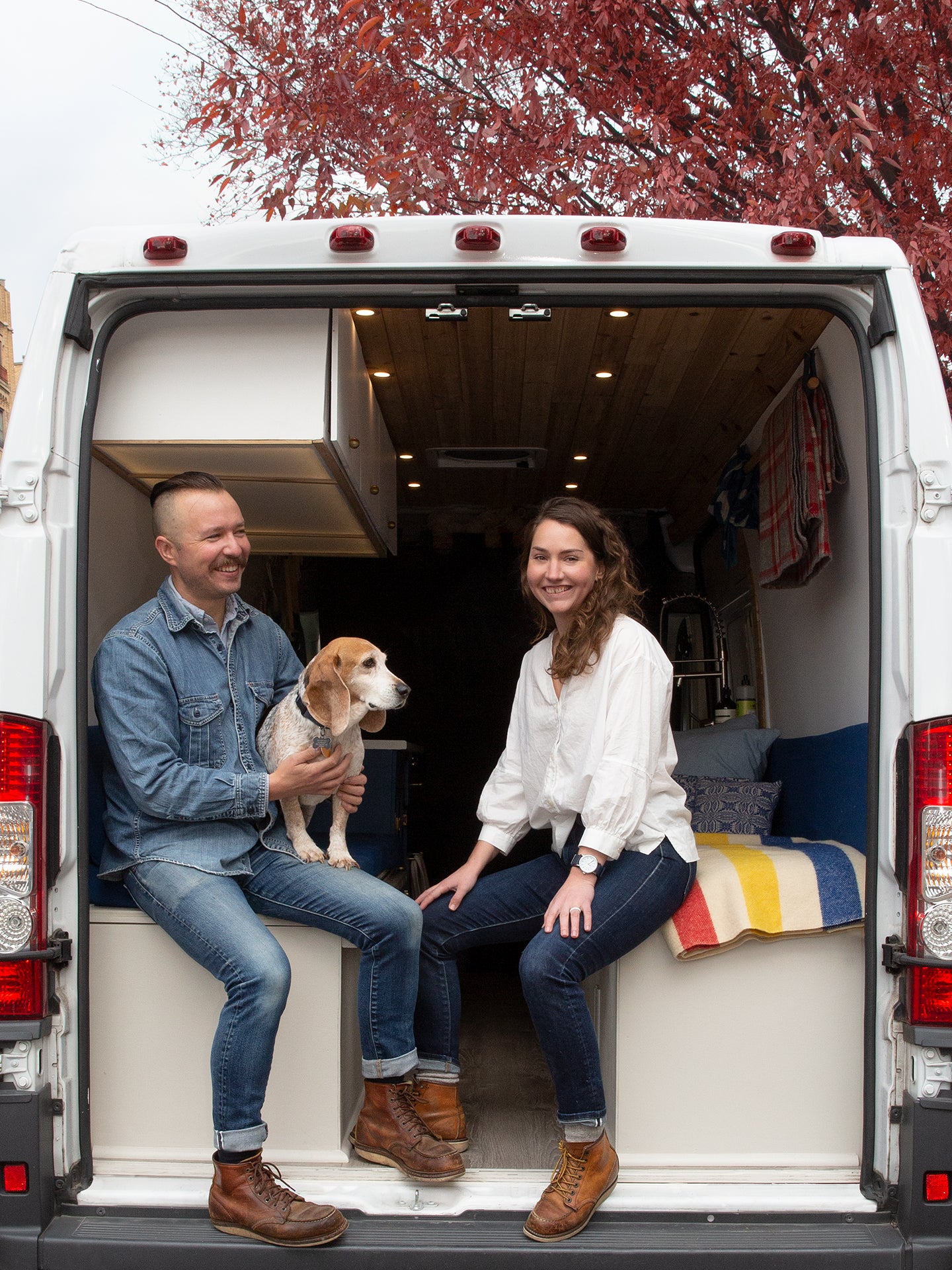 Of the 6 million–plus photos tagged #VanLife on Instagram, you’ll find that many of them paint a glamorous picture of small-space living, with their butcher block countertops, full-size refrigerators, and stand-up showers. But you don’t need all the amenities to live an enviable life on the road. Just ask Martha Main and Nat Tingley, who renovated a 2017 Ram Promaster and turned it into their dream house on wheels without all the bells and whistles. “The point of the lifestyle is to pare down and get back to a place where you don’t need 40 sweaters—maybe you only need one,” says Tingley.

Embracing minimalism was only one reason they left their Brooklyn apartment one year ago. “New York City is expensive,” he continues. “The van was a way we could take ownership of our lives. We went all in.” Working out of their studio in Rhode Island, where they also rent a small cabin (this is their full-time home when they’re not on the road), Tingley and Main transformed the former metal box, which they scored for $21,000, into a super-functional retreat. With the exception of some of the electrical, the pair did all the work themselves. There aren’t any fancy swings or TVs, but there are plenty of clever IKEA hacks (you’re welcome!). Here, the couple walks us through their yearlong, $7,000 DIY reno.

Find a Van That Fits You and Your Budget

Fun fact: Those big RVs that look like tour buses cost as much (sometimes more!) than a small house. (Even a Mercedes Sprinter can run you $70,000). Main and Tingley didn’t want to spend a small fortune on their vehicle, plus they wanted to be able to fly under the radar when they traveled to new cities. The Ram Promaster was an ideal fit. When they purchased theirs, it had around 17,000 miles on it (once upon a time the van was a caterer’s truck), and it’s the widest and tallest version of that model, so they can stand up and move around with ease. “Luckily, Martha and I aren’t large people. We always say life’s too short to be tall,” jokes Tingley.

Make the Layout Work for You

In most converted vans, the bed takes up half the back portion of the living space. But Main and Tingley, who use their space for both fun and work (together, they run a graphic design and branding company called Mainland Studio), knew they needed to keep a clear walkway. Before converting the shell into a livable space, Main took length, width, and height measurements and then played around with basic 3-D modeling in Adobe Illustrator to get a better sense of what furniture would work in the van. The reimagined layout included room for a sink, refrigerator, two benches (that can be turned into a bed with a simple flip of a hatch), and overhead compartments.

Be Cautious of Overbuilding

After installing three types of insulation (cotton candy–looking fiberglass, board, and spray foam), the couple tackled the subfloor, which is made up of 3/4-inch planks bolted to the base of the van. The sturdy surface adds stability (there’s less flex when the vehicle is in motion) and serves as an anchor for the built-ins. But looking back, Tingley admits they could have achieved the same structure with half-inch boards. The thicker wood ultimately makes the van heavier. “We were young,” says Tingley, laughing.

On top of that, the couple purchased plywood with a weatherproof coating, which was more expensive than the regular stuff and ended up limiting their flooring choices down the road. “We couldn’t stick anything to it,” he says. “Now we essentially have a floating floor.”

Splurge on the Necessities

Installing a fan was essential to airflow for two reasons. Not only does the couple cook on a powerful camp stove by Stansport (onions are okay, but halibut is a no-go), but just being in the van for extended periods of time can cause condensation to build up. Adding a fan soaked up a good chunk of their budget at $400. (The pair opted for a model that could be left open during rainstorms, which only added to the cost.) To position it, they cut a 12-inch hole into the ceiling. “It was the most nerve-racking part,” says Tingley.

Another major expense was installing solar power. Between the three flexible panels that went on the roof, the optimization module, cables, and battery, the upgrade rang in at $2,570. But Main says it was worth every penny. “Even on a cloudy day, we can have the fridge running, the lights on, and two phones charging and we use as much power as we draw in,” she says. In other words, they can live completely off the grid.

Surprisingly, the tongue and groove Northwest cedar panels on the roof was the least expensive addition, rounding out to a mere $50 at Home Depot. Another big save: Main purchased two twin IKEA foam mattresses for the benches and covered them in Sunbrella indoor-outdoor fabric that a friend donated. Using a hot knife, she cut off small slices to make the backrests, saving the wider portion for the seat cushion. (The hack only cost $120!) She also purchased a 90-inch slab of white laminate countertop from the Scandinavian retailer for the custom navy blue cabinets, which are painted in New York State of Mind by Sherwin-Williams.

Be Picky About What You Pack

“It’s a natural impulse to want to include all the luxuries of an apartment when you’re about to hit the road,” says Tingley. But the couple quickly learned to distinguish their nice-to-haves from their need-to-haves. Things that are oddly shaped, break easily, or can’t sit upright didn’t always make the final cut. Storing their objects became another challenge. That’s where clever accessories, like a pegboard in the kitchen area, came in handy. The hardware store fixture holds utilitarian items, including a small cast-iron pan, tin coffee cups, and a well-worn wooden spoon. Clothes are stowed in the upper cabinets, while sentimental things or really anything that can be easily damaged are housed in compartments beneath the benches.

Be Mindful of Your Roommate

For Main, the biggest challenge of living small isn’t about deciding what to leave behind or how to store the things you keep, it’s constantly being on top of each other. “When you go out of the van, it’s immediately very public—and inside, it’s all shared,” she says. “I’m an introvert, so I need to make time to be alone.” And though it doesn’t happen often, there are times when the pair is literally stepping on one another. “Sometimes toes get stubbed,” jokes Tingley. “It’s a rare event, but it happens.”

See more stories like this:  So What’s It Really Like to Live in a Tiny Home? This Might Be the Easiest Way to Embrace the Tiny-Home Life We Have a Color Crush on This Tiny Blush Airstream