Quirky Walls Won Over This Designer During Her Apartment Hunt, Not Amenities

Why she didn’t settle on an ordinary rental. 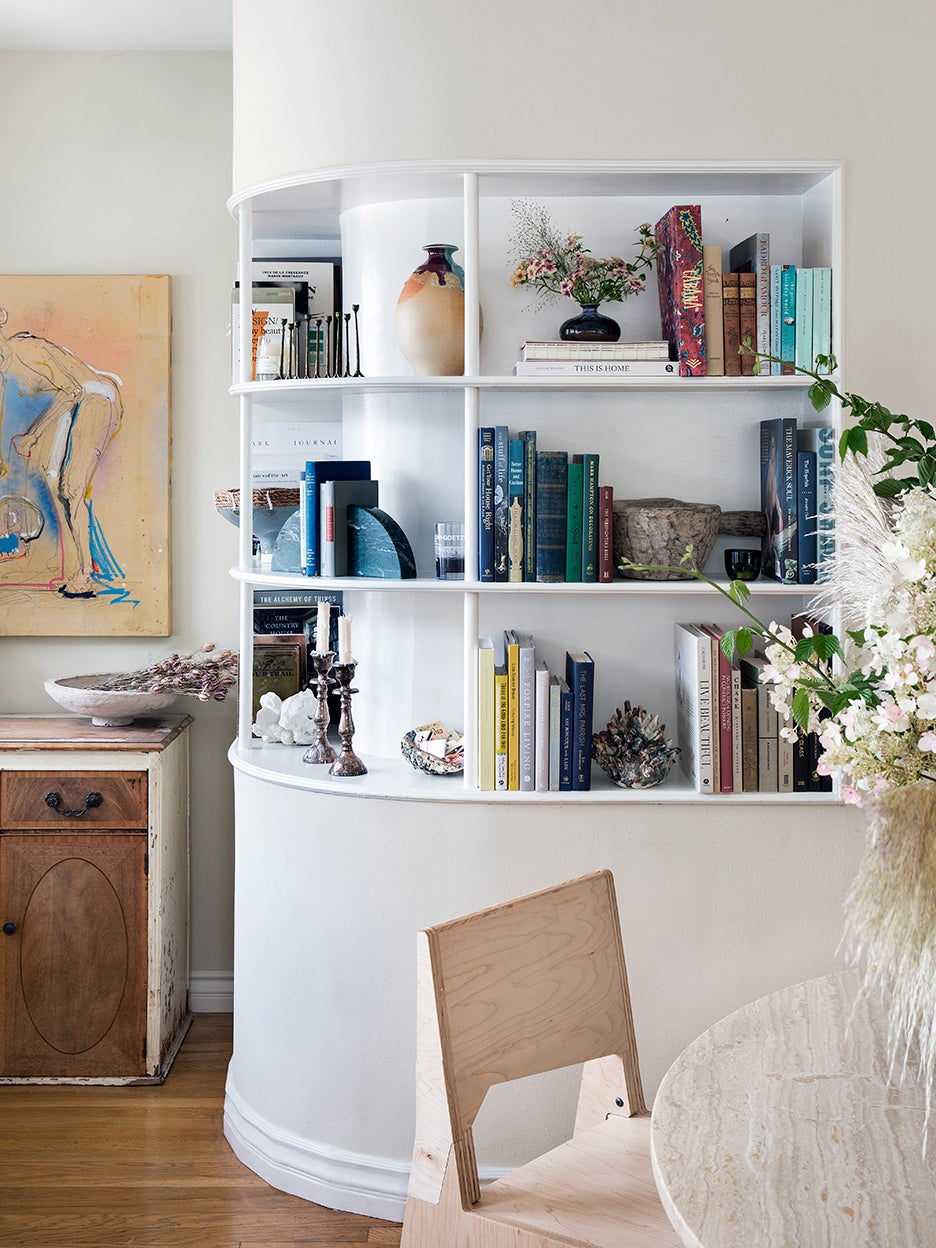 When Melissa Tingley first toured the 710-square-foot apartment in Los Angeles’s Sherman Oaks neighborhood, she was fresh off a breakup—but not the kind you think. Days before, the designer and her husband had applied for a rental they loved, but someone else had gotten there sooner. “You get attached,” says Tingley. “You’re devastated because you already had all of these ideas.” So the minute she walked into this sunny unit, located on Ventura Boulevard, she didn’t think, she just acted. “Once we moved in, I realized it was going to be a fun challenge,” she recalls.

Large, contemporary complexes have never been the designer’s cup of tea. During the couple’s apartment hunt, she narrowed in on older structures with character. “I was open-minded in the sense that I wanted something with personality, but I definitely was not going to settle for something ordinary,” says Tingley. This one-bedroom had its fair share of quirks, from vertical window blinds to a curved bookcase. It’s rumored that once upon a time the utility closet had stairs leading down to the shop on the street level. “When we were doing some plumbing maintenance in the bathroom, we found a hidden bottle of alcohol that looks like it might have been from the ’20s or ’30s,” she says.

It took Tingley one year to fully furnish the space. As a result of its long, narrow floor plan, the designer ended up making unconventional choices, like creating two dining areas, but she didn’t touch the ceiling light fixtures, window treatments, or the beige-colored walls. “In L.A., it’s not typical to make changes when you’re renting, because there’s a good chance you’re going to move again,” says Tingley. “We just had to embrace it.”

Lining the curved built-in with just books wasn’t an option, at least along the contoured part. The middle section only works for displaying reading material if you’ve got something to support it, so the designer mostly uses that area for displaying decorative objects, like vessels, candles, and a menorah. “It’s almost never-ending,” she says of constantly shifting around trinkets.

Tingley tapped into her prior styling experience (she worked at various firms before breaking out on her own to found By Melroseco) and color-coded the shelves without making them look too contrived. The trick? Throw a gray book in with the pink ones or put the navy bindings next to all the red. “It’s more organic and natural-looking while still being fun,” she explains.

“I definitely was not going to settle for something ordinary.”

Sizing was crucial when picking out seating for the living area. Tingley opted for a custom sectional with an extra-large cushioned ottoman, thinking a standard coffee table would make the space look empty. “It takes up the right amount of room,” she says of the piece. Neither the couch’s silhouette nor the ornate rug is of the moment, and that’s the point.

“Trends fade,” says Tingley. “I choose colors I love and natural fabrics that are comfortable and luxurious to me.” For an extra-personal touch, she hung a painting on the wall adjacent to the bookcase, created by her brother-in-law, Connor Tingley.

“I choose colors I love and natural fabrics that are comfortable and luxurious to me.”

Tingley and her husband discovered the 1950s Clifford Pascoe marble bistro table 20 minutes before they found the funky chairs with zigzag armrests (she believes they’re from the ’70s, possibly Italian) while at a local flea market. The intimate dining setup is perfect for the empty wall space just off the kitchen. “It’s very convenient for having breakfast, drinking coffee, or working,” she says. The four-person travertine dining table from Anthropologie, located toward the front of the apartment by the bookcase, is ideal for entertaining guests.

The colorful books, sculptural furniture, and artwork help distract from the dated blinds. “There’s no point in getting custom drapery if you’re going to potentially move,” says Tingley. While they might be an eyesore, the treatments are super-functional and allow the couple to control the amount of sunlight entering the apartment, which is handy when Tingley is working at her vintage desk by the window.

The CB2 nightstands continue the curve theme of the apartment, but the designer tweaked the pieces by swapping out the knobs. The only “renovation” Tingley made was installing plug-in wall sconces from Visual Comforts on either side of the linen-covered headboard. Almost everything else in the bedroom, including the dresser and the three tiny portraits above the bed, is vintage. “The challenge in L.A. is no one wants to spend money on decorating their apartment when they know they eventually want to buy a home,” says Tingley. “That’s when I recommend thrifting pieces you can make your own for the time being. It becomes something special.”