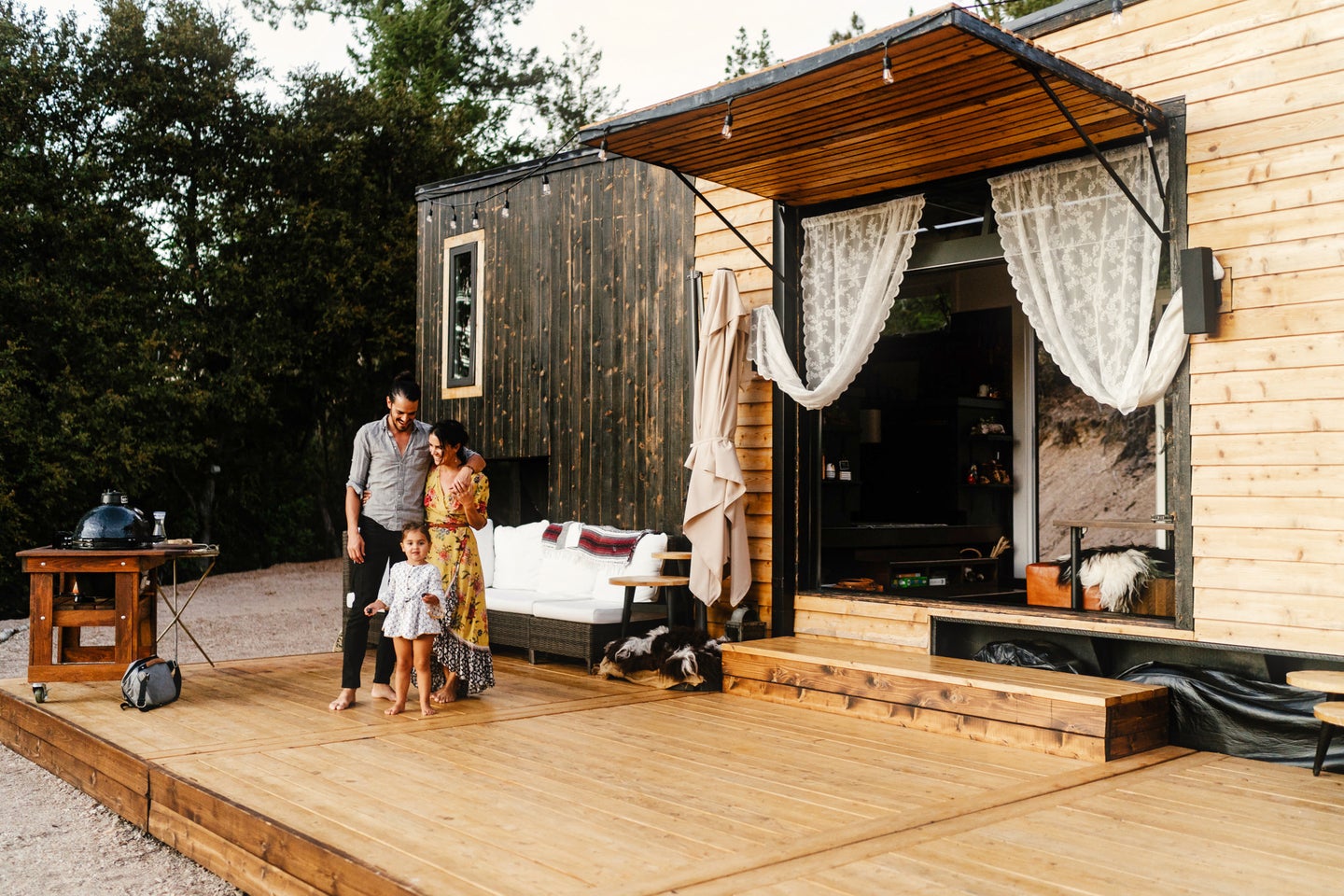 Bela Fishbeyn and her husband, Spencer Wright, started toying with the idea of a tiny home when the lease on their apartment in San Francisco’s Bay Area was up for renewal. “It was a housing solution, to be honest,” admits Fishbeyn, who started documenting their tiny home journey two years ago in her blog, thisXlife. “We realized that we had been paying $30,000 a year, and it really wasn’t going anywhere.”

Not long after they gave up their lease, Fishbeyn discovered she was pregnant with their now-2-year-old daughter, Escher. Putting down permanent roots, no matter the size, suddenly became more appealing. Once they found the perfect plot of land overlooking the Santa Cruz Mountains and the right builder, the decision became less about downsizing and more about building their dream home. “Our entire approach from the beginning was to design a tiny house that never, at any point, felt like one,” shares Wright. “If you wrote down all the details on paper, it would not sound like a tiny house.”

King-size bed? Check. Full-size refrigerator? Check. Dishwasher? Check. Their tiny home was designed to have nine distinct living spaces, each one separated from the other by either a difference in level (steps or a ladder) or a soft partition (curtain, shoji paper). Keep reading to learn more about how the family of three lives large in 300 square feet.

They Didn’t Skimp on Luxe-Looking Materials

photo by bela fishbeyn Photography by none

In the short six months between deciding to build a tiny home and actually owning one, Wright and Fishbeyn dedicated two to three of those months to research. Their biggest concern? Finding a builder that wasn’t going to sell them “just another studio on wheels” but rather a living, breathing home. “You feel very large when you’re inside of it, really,” says Wright. “The space is so thoughtful.”

“If you wrote down all the details on paper, it would not sound like a tiny house.”—Spencer Wright

With only a mere 300 square feet of space to cover, suddenly all the design features Fishbeyn and Wright could have ever dreamed of were at their fingertips: They could install a hammered copper kitchen backsplash if they wanted to; they could have a chef-approved range if they so desired. “We wouldn’t be able to afford our house if it was built to scale,” explains Fishbeyn. “The fact that it’s tiny makes it affordable.”

Almost One-Third of Their House Is Open to the Outdoors

photo by bela fishbeyn Photography by DANIELLE MOSS VIA THEEVERYGIRL.COM

One of the main reasons Fishbeyn and Wright chose to work with builder David Latimer of New Frontiers Tiny Homes was that his Alpha model (the one the couple chose as the base for their space) prioritized access to natural light. On one side of the home, a large garage door opens up to a 350-square-foot deck. A sliding glass door on the opposite side of the house can be opened to create a breezeway. “So much of our design aesthetic is about letting natural light and natural beauty in,” explains Fishbeyn. “We love decorating with flowers and natural materials.”

Their Daughter Has Her Very Own Bedroom

When it came time to decide how they were going to make space for Escher, the couple decided to add a small loft area opposite the master bedroom so that their little one could grow up with her own private room. The idea, while convenient for everyone involved, terrified Fishbeyn at first. “I worried about the stairs and other small things that would come up, but, in reality, it has just been an incredible experience for her,” she shares.

“It’s been a really neat experience to raise a child without buying her all the stuff that comes with it.”—Bela Fishbeyn

The space includes a bed with a curtain and two small corner shelves for toys and books, as well as a small basket. There’s limited room for clutter, so sticking to a strict toy amount is essential. “It’s been a really neat experience to raise a child without buying her all the stuff that comes with it,” says Fishbeyn. “She spends so much time in make-believe.”

Their Tidy Kitchen Is a Factor of Diet

Fishbeyn and Wright have spent the past year experimenting with intermittent fasting—skipping breakfast and lunch altogether. The experience has been eye-opening in more ways than one, particularly when it comes to how they organize and store items in their teeny kitchen. “Our diet definitely plays a big role in our kitchen,” says Wright, who worked as a professional chef before deciding to stay home with Escher when she was born. “We go to the farmers’ market and stock up on produce once a week.”

Their meals are generally uniform, often incorporating some sort of protein with a salad and other fresh veggies. Hence, you won’t find supersize bags of tortilla chips soaking up cabinet space or prepackaged dinners lying around in the freezer. “We have a certain set of dishes that can vary really easily but don’t tend to require totally different dry ingredients,” he continues.

They’re Minimalists by the Numbers, but Maximalists When It Comes to Quality

Fishbeyn still laughs when she thinks back to an odd cooking experience she had at an Airbnb just before moving into their house. “They had eight different spatulas, and they were all the same!” she says. “Do you really need eight spatulas?”

“The tiny house really just allowed us to do more of what we wanted to do anyway.”—Spencer Wright

In their kitchen (and elsewhere) you’ll really find only one of everything: one teapot, one table runner, one hand soap. Their secret? They find the best version of an item and commit to it. “I think we are very minimalistic in the sense that we have very few objects, but we’re maximalists when you think about the actual objects that we have,” explains Fishbeyn. “We try to make them as good as possible.”

If you thought this family of three couldn’t go any smaller, think again. Up next? Van life. “We’re really active,” says Wright. “The tiny house really just allowed us to do more of what we wanted to do anyway. I don’t think we ever feel like it’s a restriction.”

This summer, you’ll them cruising the coast of California for two months. In the meantime, you can test out their tiny home for yourself by scooping it up on Airbnb.

See more stories like this:  The Best Small Spaces We’ve Seen This Year How One Family of Five Lives Happily in a 180-Square-Foot RV This Tiny Trailer Is More Stylish Than Most Apartments