Exposed clothing racks would no longer do. 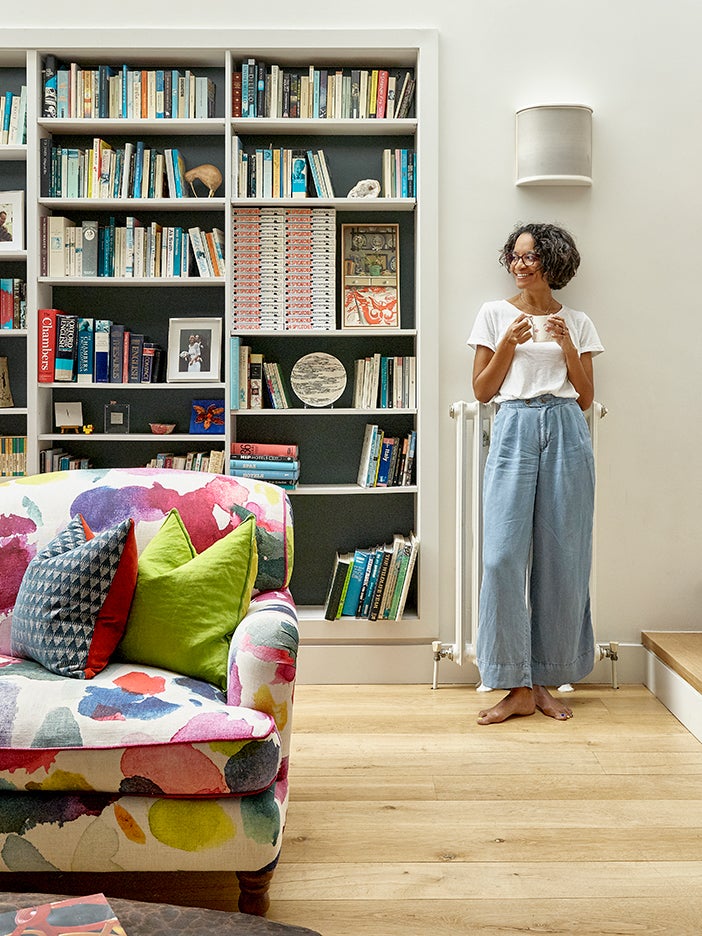 Clare Gaskin inherited her London house at 22 years old. Her great-grandfather purchased the compact home on the River Thames in Putney before the area was trendy. When the sitting tenant—“This little old lady lived there, and she was paying hardly any rent,” says Gaskin —passed away, the interior designer, still a graduate student working her first job at Sotheby’s, found herself with a property she had never set foot in.

“I had daydreams of getting my mates from university, some paint cans, and a few beers, and renovating in a really basic way,” remembers Gaskin. The reality required something a little different: The interior was dark and dingy with no central heating or period features, an awkward layout, and a garden wall that had been crumbling since World War II. “I suddenly had to get a full-on mortgage to pay for the work,” she says.

Gaskin ended up hiring an architect for the structural work, which included adding a side extension and skylights in the living room to bring in much-needed light. She had the kitchen moved to the front of the house and everything painted white. “I wanted to be able to have 12 people around for dinner,” she says. She lived in her newly sun-filled, all-white box throughout her 20s, throwing lively parties where everyone would huddle around the trash bins—that had a prime spot by the bay window—while she cooked.

advertisement
“I had daydreams of getting my mates from university, some paint cans, and a few beers, and renovating in a really basic way.”

But five years ago, engaged to her now husband, Will, she knew it was time for an update. “I wanted to inject it with both our personalities and be a bit braver,” says Gaskin. “I treated my husband as my client.” The couple planned to renovate slowly—then they found out they were pregnant. Everything went into overdrive.

The first order of business: building a window seat in the kitchen where her friends used to perch by the trash bins. “There used to be a radiator there, so I turned it off for a full winter to make sure the room wouldn’t get too cold without it,” explains the designer. The extra storage under the seat made up for the lack of a walk-in pantry; the lower cupboards keep things like onions and potatoes cool and off the counters. Out went the white, in came Farrow & Ball’s punchy Charlotte’s Locks, a nod to Will’s favorite color, orange. The punchy hue lives on the shutters as well as the inside of the kitchen cabinets.

Gaskin’s second go-round meant she could fix the mistakes she had made in the first renovation. She moved the washer and dryer out of the kitchen to the main bathroom; ran the cabinets all the way to the ceiling (the open space only collected grease and dust); outfitted her drawers with spice racks and knife blocks from IKEA; and added a breakfast station that hides a toaster, a butter dish, and cereal boxes for her son, Rufus, now 4.

For the living room fireplace, the designer installed a desk for mother and son: A lower surface is the perfect height for Rufus to sit and draw (which has come in handy during quarantine). “When we have friends over, it converts into additional seating with just a few cushions,” notes Gaskin.

At the opposite end of the room, more shelves house a collection of vinyl records, which Gaskin inherited from her father when he passed away seven years ago. “My dad’s music taste was so diverse, so it’s an eclectic mix of classical, rock, reggae, blues, and country,” she says. The adjacent bar, with its doors that look like rustic metal (but are actually melamine), creates a diversion from the TV hung on the wall.

The bright hues continue in the staircase, which Gaskin had painted as an homage to a pair of green and yellow New Balance sneakers her husband gave her the week before their wedding (the front door is covered in an emerald hue to match). “When Will and I were dating, we used to give each other Saturday presents,” she remembers.  “I’m about to throw the shoes away because they’ve got holes, but I absolutely loved them.”

Exposed clothing racks in the main bedroom did the job when Gaskin lived alone, but now that she was sharing the space, wall-to-wall closets were a necessity. Now one drawer even opens up to reveal a vanity station. An ottoman at the foot of the bed doubles as laundry bins. “I split it into sections for whites and colors, with bags that you can pull right out and carry to the washing machine,” she explains.

A bird-themed wallpaper inspired the decor in Rufus’s room: The metallic-blue shimmer in the feathers drove the choice of teal carpet, while the subtle purple accents gave Gaskin the idea to line the curtains in lavender. Wanting her son to grow up around items that belonged to his grandparents, Gaskin grabbed a vintage dresser from her mom’s house and reupholstered her father’s favorite chair in a colorful fabric from Timorous Beasties. “Rufus will never know his granddad, so I wanted him to have something of his,” she says. She kept the IKEA Lack shelves (the room used to be her home office), but spray-painted them gray and installed a clothing rod for her son’s clothes.

advertisement
“Rufus will never know his granddad, so I wanted him to have something of his.”

Converting an entire bedroom into the main bathroom initially caused friction between Gaskin and her architect during the first remodel, but she’s so thankful she pushed for the change. It now holds a shower, a separate bath, and her new, expanded laundry room. She kept the walls neutral and added interest underfoot instead with mismatched encaustic tiles from Mosaic Factory. “My bath is my sanctuary time,” she says. “And I want to decompress without looking at crazy walls.”