From a Fruit Chandelier to Fornasetti, Sierra Tishgart’s Home Has It All 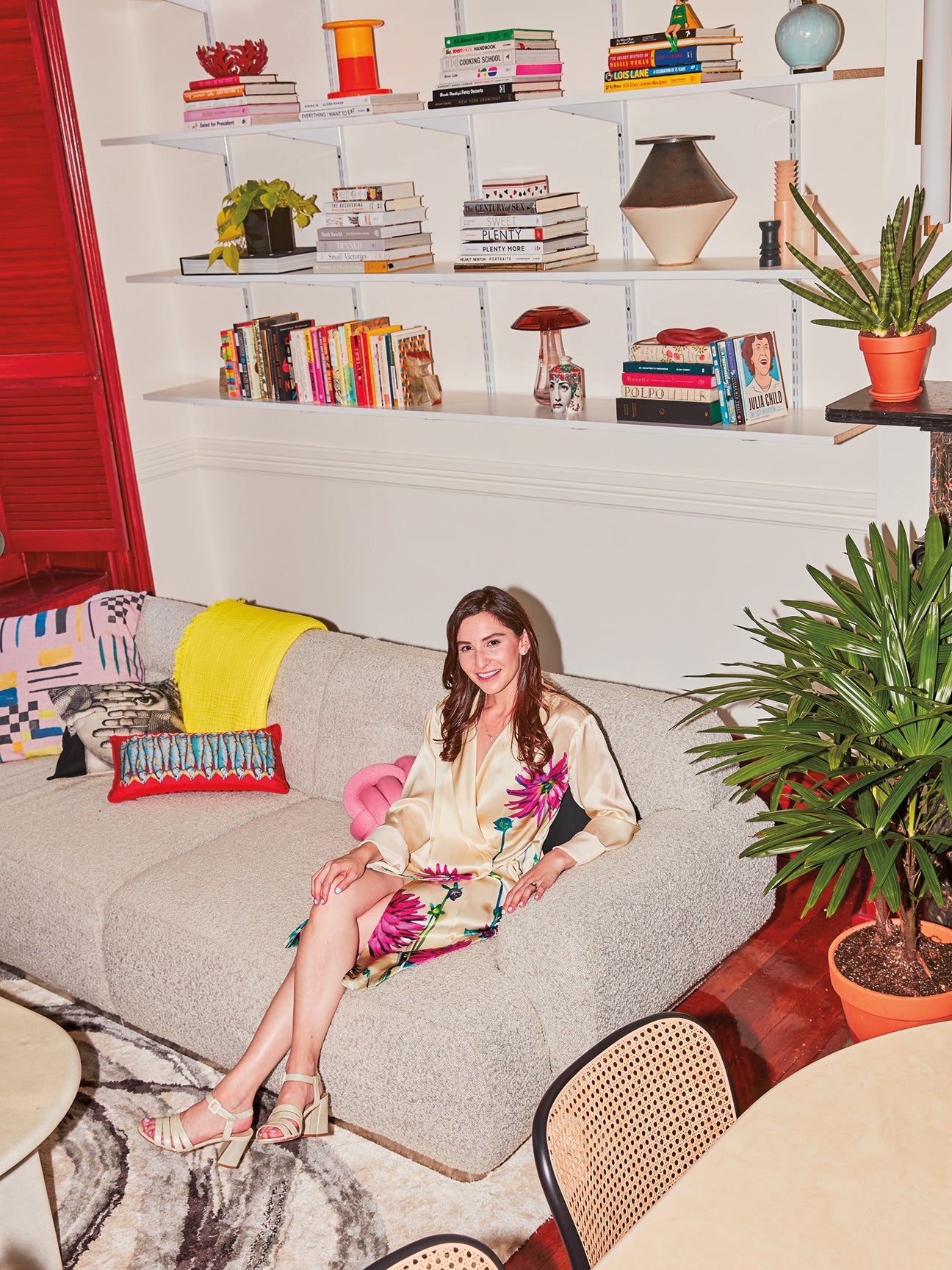 Most New Yorkers don’t just stumble into their dream apartment after a quick and painless real-estate search. Then again, most apartments don’t come with über-high ceilings and a glass fruit–bearing chandelier in the middle of the living room.

It was the first thing Sierra Tishgart noticed when she walked into the West Village rental. “I love color, I love drama, I love character, and I had never seen anything like it,” says the cofounder of cookware brand Great Jones. “My mind started racing.” It’s a cliché for a reason: When it rains, it really does pour. Tishgart and her fiancé, Galen, immediately snapped up the place (a product, she says, of her obsessive StreetEasy stalking), moved in within a few weeks, and pulled it all together in just six months with the help of designer Jen Levy.

Tishgart is naturally drawn to an eclectic mishmash and vibrant colors (“If you look at the Great Jones brand, I think that’s clear,” she jokes) and pinpoints a home in Italy that she once stayed in as her main source of inspiration. “I’m a huge Fornasetti fan,” she says. “Previously, I had gone very Herman Miller mid-century, and I really wanted this to lean more Italian mid-century.” A frequent entertainer, she aimed to mimic the comfortable luxury and layered textures of the era—but even so, she wasn’t too worried about sticking to a theme. Shopping was done on a case-by-case basis.

“I’m sure some people design their homes by outlining it all and clicking ‘purchase’ all at once, but I did things pretty piecemeal,” she explains. “When I was drawn to something, I tried to make it work.”

It was the first time that Tishgart was truly investing in furniture, so within the whirlwind decorating process, she carefully considered each graphic rug and cane chair. There are a few Craigslist scores, including the oval dining table and travertine nightstands, and more than a handful of Chairish and eBay treasures, like the Yves Klein Blue armchairs. Everything seems to have fallen together organically in a way that might be annoying if it didn’t look so incredibly cool—we found it hard to pick a favorite corner of the apartment. So we didn’t. Instead, here are three standout moments from this vintage-filled space that don’t take themselves too seriously.

“Artwork is hard!” says Tishgart. “I’m not at the point in my life where I’m investing in it. I was going off of things that felt personal; I’m not above framing a poster or a lithograph.” A print from an art show in Taiwan, where she got engaged, lives in the living room, and a Frank Stella work hangs above the bed. “One of Galen and my first dates was going to the Frank Stella exhibition at the Whitney,” Tishgart explains. “I didn’t know it at the time, but he’s color blind, which is kind of funny because you can’t understand Frank Stella without color.”

Most of Tishgart’s space is super-energetic, so for the bedroom, she chose to create a peaceful escape. Farrow & Ball’s Inchyra Blue paint offered the perfect moody backdrop, while a black upholstered bed frame from Interior Define anchors the room. “One of the great privileges of this apartment is that there’s a lot of space—I never had room for a queen-size before!” she says. “The goal was to have this beautiful, simple bed with a really fun rug and pillows.”

“Artwork is hard! I’m not above framing a poster or a lithograph.”
advertisement

Believe it or not, those shelves are from Home Depot. The inexpensive unit proved ideal for showcasing the most important aspect of that nook: all the books and tchotchkes that Tishgart has been collecting since her college days. “I became a crazy eBay hunter for Murano glass, and I really love Coming Soon’s objects—no one does objects better than they do,” she says.

However, the most memorable artifact is a bit less design-y—it’s a Lois Lane figurine that Tishgart has had since she was in journalism school. “The nice thing with the bookshelves is that they’re not too precious,” she says. “They are something that immediately gives the sense that it’s my and Galen’s apartment; you really get to know us as people by looking at those shelves.” Consider her diverse collection the go-ahead for enabling your hoarding tendencies—tastefully, of course.

See more homes we love: Finding 3 Feet of Space Was a Game Changer in This Family’s Dumbo Apartment All the Best Things in This Photographer’s Home Came From Her Childhood Attic Of Course, Every Inch of This Creative Director’s Home Is Styled to a T