The Color-Coded Cabinets in This Kitchen Makes Organizing a Breeze

Never second-guess which drawer your silverware is in again. 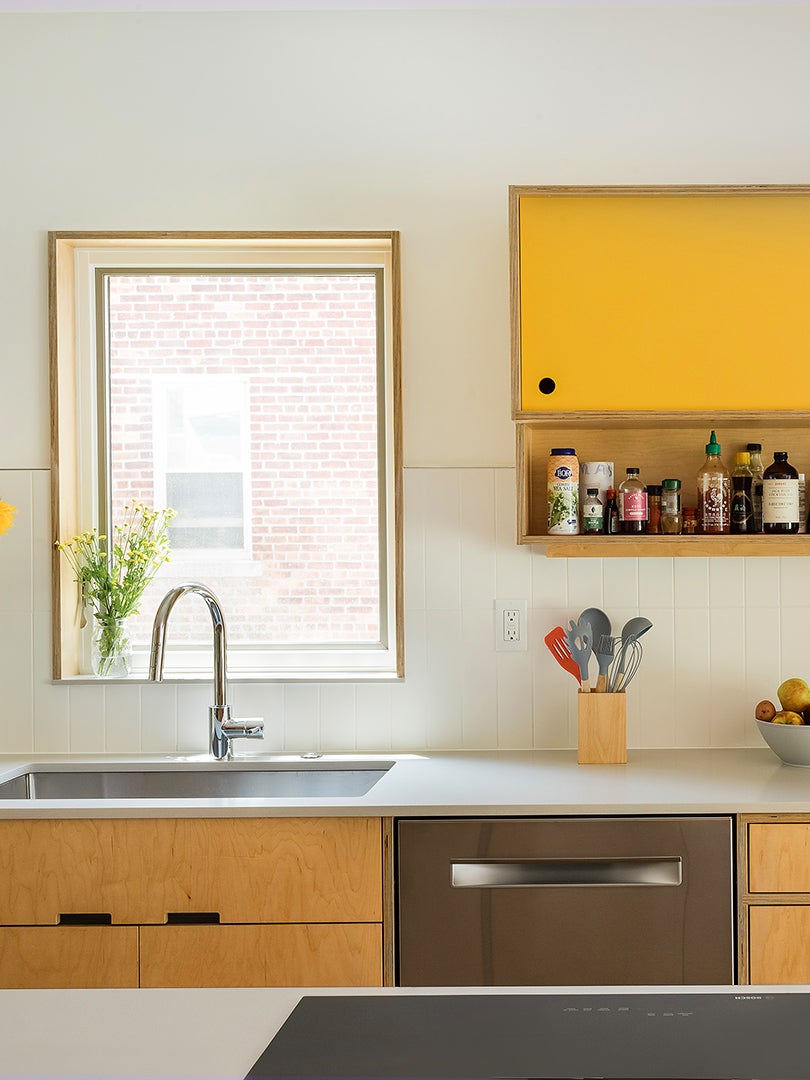 When architects Jody Beck and Ross-Alan Tisdale’s latest clients told them they wanted to introduce color to their new kitchen design, Beck, the founder of Traction Architecture, was assuming they meant one hue. “Then they picked out four,” she says. Beck and Tisdale had to figure out a way to incorporate Rust, Ochre, Night, and Mint (those are the names of the laminate Kerf cabinet colors) without it looking all over the place. The key was a mix of open and closed, hardware-less cupboards and drawers where the shades appear at random on some of the fronts and inset nooks. The high-grade plywood (it’s made with formaldehyde-free glue, making it extra-sustainable) still reads as the primary material. “We just kept rearranging it in a 3-D model until we got it right,” says Beck.

You’d never know today that the playful kitchen is technically smaller than what it was before (while the architects gave up some square footage to create an outdoor porch, they simplified the layout to make it open to the dining room and prioritized additional countertop space in the form of a peninsula and island). “Bright white walls can make a space feel bigger even if it’s physically a little bit smaller,” says Beck. Ahead, she gives us a peek behind the scenes of the remodel and reveals the unexpected pros of color coding.

Step Over the Basement Stairs

The staggered arrangement of cabinets surrounding the fridge cleverly coordinates with the staircase leading to the basement below. Before the reno, there was actually another service stair leading to the second floor as well, but the architects got rid of that in an effort to add this storage spot. “It was a way to utilize every little bit of space and make it as efficient and productive as possible,” says Beck.

The unforeseen benefit of having color-blocked cabinetry: guests who aren’t totally familiar with your space can find things in a flash. “The idea that you can be like, ‘Grab the silverware in the mint drawer’ or ‘The trash is in the blue cabinet,’ to identify them by color—I love that,” says Beck.

Stop Kid Clutter With a Peninsula

The architects situated the majority of the open nooks at heights where the homeowners’ three kids could easily grab things on their own (the round finger holes on the sliding doors and niches on the drawers are also ergonomic). The lower built-ins on the dining room–side of the peninsula are dedicated to all things school gear, craft supplies, and miscellaneous junk. Stacks of artwork can be swiftly tucked away in the red drawers, “rather than let it pile up on the counter,” says Beck. This kitchen stays tidy all on its own.