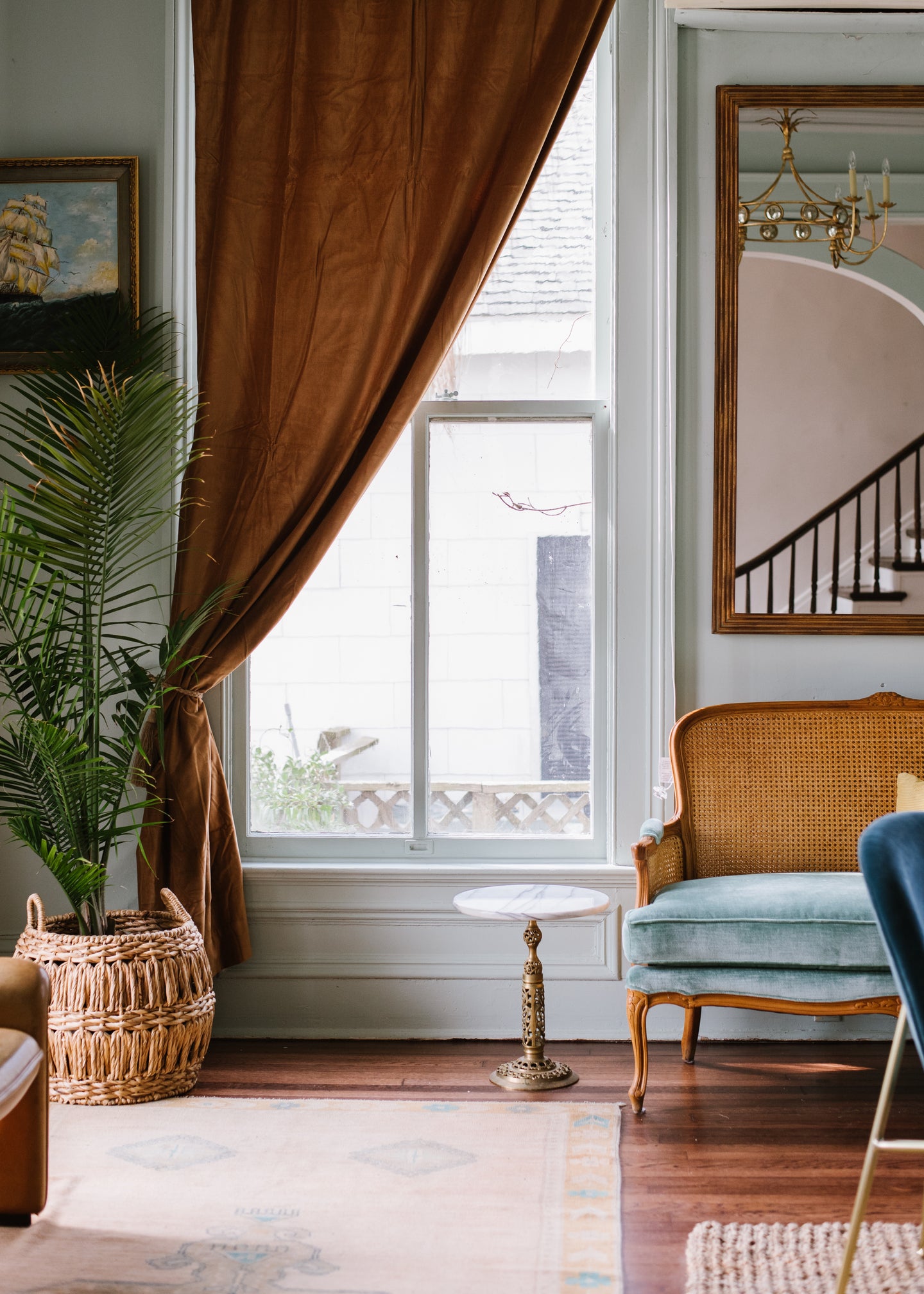 Once the summer home of former Texas Governor Richard Coke, this 19th-century Greek revival mansion feels like stepping back in time. Built in 1866 by Lewis W. Carr, the Galveston, Texas, property—located a short 10 blocks from the temperate waters of the Seawall beaches—was restored and remodeled in 2018 by Austin-based interior designer Shannon Eddings. Now, the newly minted eight-bedroom B&B has an old-meets-new look and features sourced antiques, nautical prints, and a calming yet unexpected color palette that Eddings says makes the home visually enchanting.

From the street, the stark white mansion holds its own amid the coastal town’s historic district and is most often recognized by its ornate front staircase flanked by two white lions. “This woman knocked on the door during installation day and had a much older woman with her,” Eddings recalls. “The [elderly woman] had just flown in and drove straight to Galveston to look for the house she lived in during the 1950s. And while she hadn’t been back in 40 years and was now 88 years old, she recognized the [Carr Mansion] by the lions.”

In addition to its impressive exterior, the home is one of the rare survivors of the Great Storm of 1900, the deadliest natural disaster in US history, which caused approximately $17 million in damages. “Galveston, back then, was this booming city, almost like an up-and-coming New York,” the designer says. “There are old Galveston prints throughout the house. With the design, I tried to honor that history by embracing the coastal colors, without going too beachy.”

Inside, Eddings aimed to juxtapose pieces original to the home and the time period with more modern finds. A multicolored Turkish rug greets guests in the entryway, while vintage Galveston postcards line the hallway along with a mirror original to the home, which has been there for decades.

In the parlor, Eddings’s favorite room of the house, she created many seating moments embracing the early 20th-century look with luxe leather chairs from a Belgian dealer, an antique recovered settee, a round marble table, and lighting from West Elm. Camel velvet curtains shade the room.

“When you walk into a lot of Galveston homes, they can be stereotypical with all beach decor, but I wanted to add in earthy [elements],” says the designer. “With [the parlor], I went for shades of blue and lots of velvet with historic prints since it’s such a rich fabric.”

While the parlor is painted a soft seafoam color, the pub, further back on the first floor, emotes an entirely different feel. Moody mahogany; dark countertops; an oversize, carved wooden mirror; and forest green walls are statement-making in a room Eddings swooned over upon first seeing the house. “Back in the day, the pub was where the men would [congregate], while the parlor was for women,” she says. “I love the color in that room too. The green was there to begin with, and we just gave it a new coat of paint.”

Upstairs, each of the rooms is named for someone who once called Carr Mansion home: from The Preacher and The Church Lady to The Grocer and The Newlyweds. The Preacher room and The Church Lady room, both at the top of the stairs, harken back to the home’s mid 20th–century history when a pastor and his wife, Shirley, lived upstairs while running a church out of the first floor. “I had a lot of fun with The Preacher room because it has so much beautiful, natural light,” she says.

The bed, original to the home, is draped with a vintage shipping flag purchased in Galveston, while a yellow West Elm bench provides a cozy spot to rest at the end of the day. Like with the color palette for the parlor, the designer added shades of blue but added in hints of both green and golden yellow. “Color is my thing,” Eddings says. Unexpected color combinations are what makes spaces unique. Even if you use a similar [design scheme] in a room, using color in a creative way will make it stand out.”

For The Church Lady room, on the other hand, Eddings played with a richer palette of navy and burgundy. Crisp white linens drape the four-poster queen bed, while an elegant painting of a woman on a beach hangs above and a navy settee rests in the corner. Like with the other artwork in the home, the nautical theme continues with a pink coral print near the fireplace.

The Grocer room, which was named for successful Galveston businessman Herman Marwitz, is the universal favorite of the rooms, Eddings says, with its array of natural light, a sunny sofa, and a plush bed. “In this room, I had a really organic design moment,” she says. “I found the painting above the mantel at the Austin Antique Mall. It was a castoff from the UT art school from a student who went there in the 1960s.”

When it came to the bed, Eddings chose a modern frame. While many of the rooms feature original pieces, the channel-backed bed makes the room stand out. “I also wanted to make sure I kept the bedding soothing with minimal pillows,” she says. “No one wants five million pillows that they are just going to have to throw on the ground.”

The Newlyweds room, which is the most secluded room in the house, has its own separate entrance and a private sitting room, plus some of Eddings’s favorite antiques in the home. “The side tables are vintage, and the busts were bought in Houston,” she says. “The red velvet chair in the corner is also antique and original to the house.”

In the sitting room, the designer continued to work in velvet pieces, including a chair from Austin antique store, Room Service Vintage. “For a while, it’s like I was buying anything velvet and all the nautical prints I could,” she says.

At 8,000 square feet, Galveston’s Carr mansion has many details for guests to uncover, and for Eddings, it was truly a passion project. “I had a good amount of time with this project and really put my heart into it,” she says. “In the end, it only took four days for the installation.”

California Chill in the Concrete Jungle: A Home Tour Nearly Everything in This Colorful Home Was Bought on eBay A Palm Springs Home Restored to Its Vintage Glory Days