A trick and a treat. 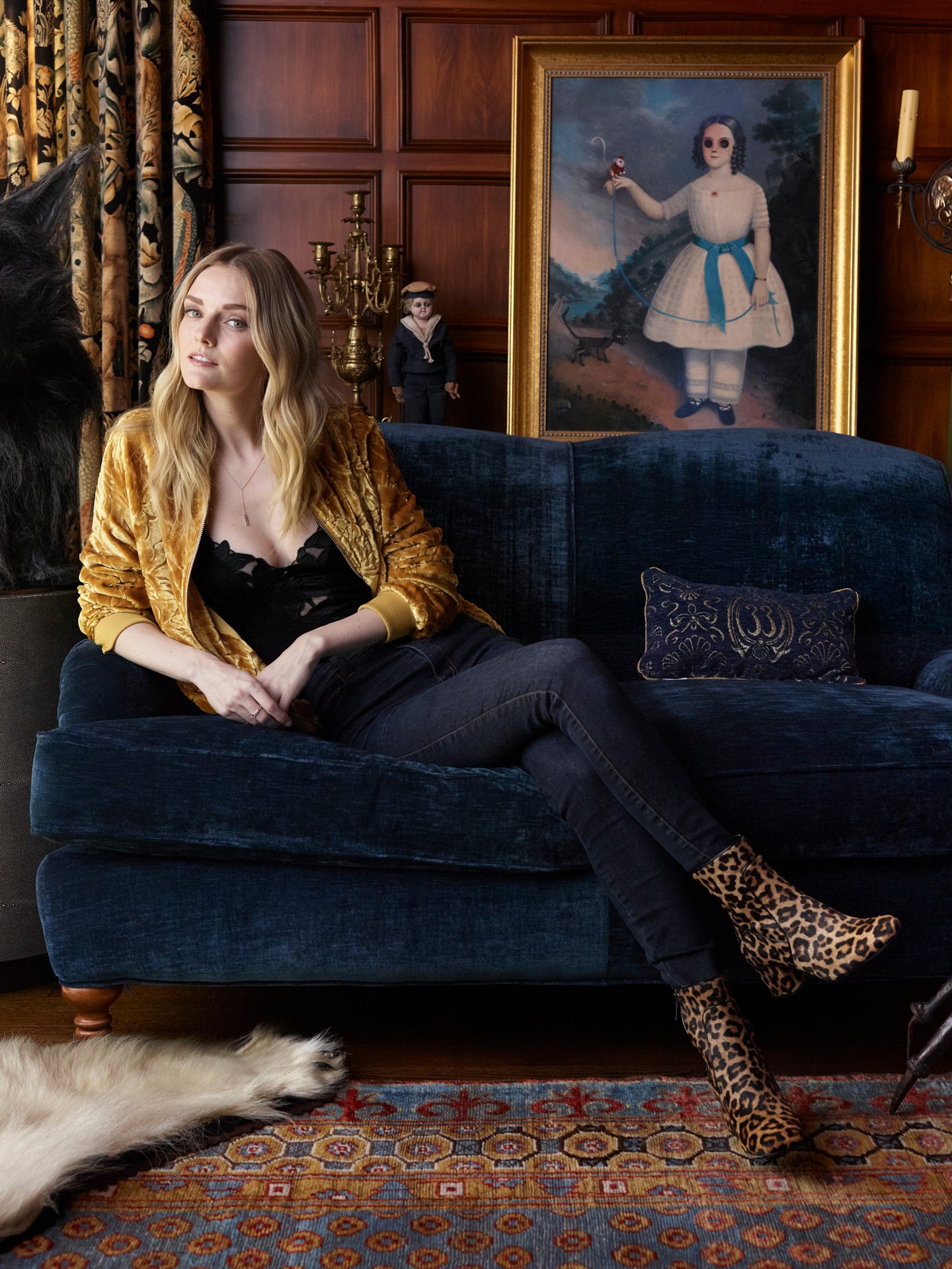 It’s early October, and Lydia Hearst has just put the finishing touches on the Halloween tree in her foyer. The actress, model, and media heiress crouches to switch on two animatronic hellhounds guarding her cobweb-covered evergreen, and they howl to life. In a sense, it’s Halloween year-round in the Los Angeles home she shares with her husband, TV host and comedian Chris Hardwick. While both stars collect entertainment props and curiosities, Hearst’s taste slithers toward the macabre.

In the wood-paneled library, she sits next to a werewolf head from The Howling, her first movie prop purchase. A sailor doll used in The Woman in Black 2: Angel of Death lurks over her shoulder, and a spider table seems to inch toward her. She isn’t a bit scared by their company. “They’re works of art, really, just not the typical kind most people go out of their way to recognize or collect,” she says.

Hearst, who starred alongside Nicolas Cage in the thriller Between Worlds and Hilary Duff in The Haunting of Sharon Tate, has always loved horror. “I think I used to watch Army of Darkness every week with my dad when I was a little kid,” she says. But until recently, her hectic schedule, combined with living in apartments that felt temporary, kept her from building a prop collection. “I was always in this transitional period,” she says. “It wasn’t until I found Chris that I think I found my home.”

After the couple bought their Mediterranean-style villa near Griffith Park in late 2015, Hearst began her unconventional, ongoing shopping spree. She prowls online auctions and the local Monsterpalooza show (yep, it’s a real thing) to find gremlins and ghouls. “Thankfully Chris tolerates my obsession of oddities and props. It’s perfect because we do have the same taste in just about everything,” she says.

Hearst has made deep ties in the special effects community and even commissions custom pieces. The home gym holds an otherworldly captor in a six-foot-tall tank, a one-of-a-kind creation by Midnight Studios FX. “I love aliens, and so does Chris,” she says. “It’s just fun.”

She stresses that there’s a method to the madness. “Every little detail in the house has a memory behind it,” she says. “Props that we buy are really ones that are special to us from films that we love or that helped shape our love of horror or cinema.” She points to the giant ragdoll in the “package room,” a small space near the kitchen where the couple sorts deliveries. String-haired Sally, a character from Disney’s The Nightmare Before Christmas, reminds Hearst of time on the couch with Hardwick. “That’s a big part of our life, Disney. If we’re not watching scary movies or sci-fi, it’s a Disney film,” she says.

Their 1928 home, designed by Paul Williams, twists and turns down the hillside, with walls obstructing lines of sight. The layout is a far cry from today’s open floor plans, and Hearst asserts that’s a good thing. “There really are true rooms,” she says. “For us, as art and oddity collectors, it’s perfect because every room is unique and has its own character.”

No Prohibition-era mansion would be complete without a hidden passage. In the package room, Hearst swings open a door disguised as a bookcase to reveal a narrow stairway to the basement. The walls are covered in one of her favorite patterns, a Bradbury & Bradbury wallpaper called “Lily,” which also adorns the Victorian foyer of Disneyland’s Haunted Mansion.

A second staircase in plain sight descends to the media room, where too many eyes for comfort are watching. A casting of the possessed girl Regan used in The Exorcist sits in a velvet-cushioned niche, looking as ready as ever to vomit pea soup. Props from films such as Gremlins 2 and Wolf—including Jack Nicholson’s original mask from the latter—preside over a carved cabinet.

A built-in bar clad with dragon tiles, which Hearst installed herself, shows off a bottle of Tru Blood, a cybernetic arm from Hardcore Henry, and other trophies above bins of sour candies.

Although she’s running out of surfaces, Hearst is not done collecting. “I’ll probably just become an eccentric hoarder,” she laughs. “I’m ashamed to admit that were I to auction off my collectibles, I’d probably just end up buying them back myself and giving the money to charity. I’m very attached to every item.”

This story was originally published in October 2017. It has been updated.