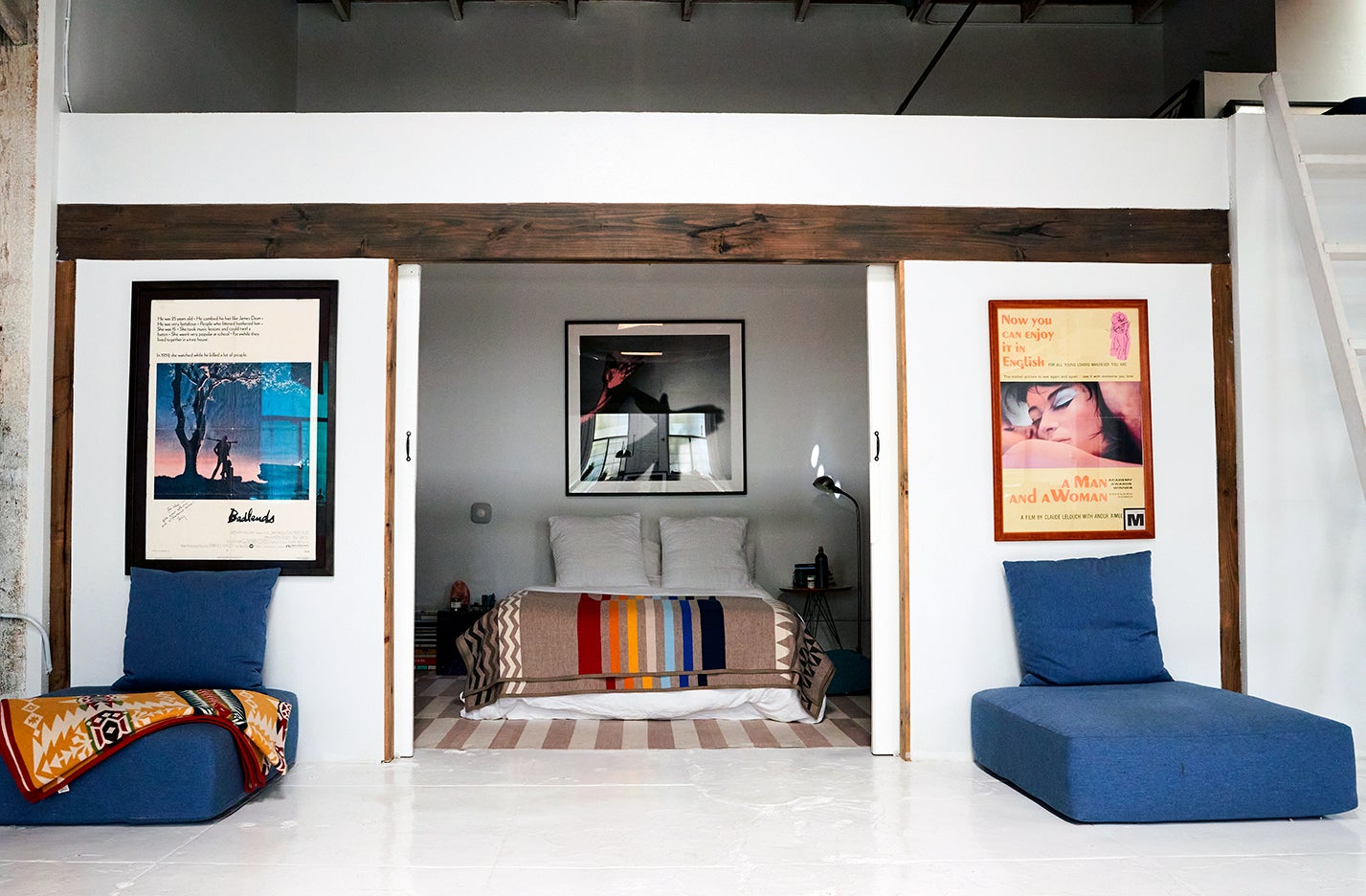 A disco ball was one of the first gifts Michèle Ouellet, a model and cofounder of Lorenza Rosé, gave her now fiancé, writer and director Ned Benson. “He’s quite hard to buy for,” she explains. The shimmery globe looms 20-something-feet over the couple’s Venice Beach, California, living room, thanks to Benson, who, much to Ouellet’s distress, decided to hang the present himself by balancing a ladder on top of a chair. He’s also responsible for the larger-than-life stereo system, which he pieced together with the help of a DJ friend. “We’re both music freaks,” says Benson.“Our best experiences during the pandemic have been hosting these safe six-person dance parties.” Lately they’ve been bumping ’70s R&B and Italian disco.

Before the space was the pair’s personal Studio 54, it was an empty concrete shell—or as Benson, who moved into the warehouse building two years before meeting Ouellet, describes it, a “giant closet.” “Anybody I showed it to was, like, you’re a crazy person,” he recalls. What the rental lacked in proper heating, cooling, and plumbing at that time, it made up for in character. It’s rumored that Dennis Hopper, Peter Fonda, and Jack Nicholson all used to hang out in one of the building’s other units and that rock group the Animals recorded one of their albums there. “I know for a fact that our place was architect Thom Mayne’s studio in the ’80s,” says Benson. “It has run the gamut.”

These days it’s a different tune. In addition to building a fully functioning kitchen, carving out a bedroom, and installing a much-needed HVAC, the couple created a bonus lofted nook for storage (or for when friends want to crash). The floors got an update in the form of ultra-durable marine paint—a cosmetic fix that was an unexpectedly intense DIY. “You have to wear a gas mask,” says Benson. The glossy white surface allows the sunshine streaming in from the foggy glass windows to bounce around, making the pair’s many plants very happy. “I’ve tried (unsuccessfully) to have a fiddle-leaf fig in the past,” says Ouellet. “But this one really likes the filtered light.”

Another major reno: The couple recently gained around 1,000 square feet by expanding into a neighboring unit. “That was Ned’s genius idea,” says Ouellet. Marking the addition is a pair of French doors that lead to her office–slash–zen sitting area, where she can host tastings for clients (or read or work out). While they’ve taken a collaborative, wabi-sabi approach to decorating, the pair agree the addition is very much a reflection of Oulette’s personal taste and style. “Michèle’s got a more maximalist flair and I’m more minimalist, so we balance each other in a really nice way,” says Benson, who remembers the day Ouellet bought the trio of squiggly coffee tables for her old New York City apartment: “She was so excited. That day reminds me of her design choices.”

“Michèle’s got a more maximalist flair and I’m more minimalist, so we balance each other in a really nice way.” — Benson

The illustration over the bench is another memorable purchase—and not just because it’s so large. The couple bought it at Chez Dede in Rome (one of the owners of the shop, Andrea Forella, is an artist). “Then later that afternoon, Ned proposed,” recalls Ouellet.

In addition to disco balls, the couple likes to gift each other art. Meaningful works, ranging from a Helmut Newton print Benson gave Ouellet for her birthday to images captured by Ouellet herself using her 35mm camera, can be found throughout their home.

With no pantry closet to speak of, the pair has embraced open-air storage in the kitchen. Everything you could ever need (silverware, coffee, knives, Le Creuset pans) are right at your fingertips. “In the future we’d love more counter space, but it works for the two of us right now,” says Ouellet. When they do need to spread out, the long dining table, which a carpenter friend made for them, doubles as an island.

The bedroom door is actually the old front gate to the warehouse’s former driveway. (It wasn’t secure outside, so Benson gave it a new purpose inside.) “If you look closely, you can see the graffiti,” he says. The ladder next to his workspace was also left behind when the place was a pottery studio, and on one of the beams there’s still a pencil sharpener intact from Mayne’s days.

While the high ceilings are a covetable feature, the metal roof isn’t always a joy when it rains. “It can be very romantic and cozy until it gets to be torrential,” says Ouellet with a laugh. Fortunately Benson no longer has to be that guy running around with buckets to catch the leaks (all holes were patched during the initial renovation). “It feels like you could be in Italy or Spain sometimes, but also in a barn somewhere,” he says of the space’s rustic charm. “And also very much New York,” Ouellet chimes in.

advertisement
“It feels like you could be in Italy or Spain sometimes, but also in a barn somewhere.” — Benson

On the rest of their to-do list for 2021: Get married, renovate a new property they purchased in Ojai, celebrate career wins (Benson’s new movie, Black Widow, comes out July 9), and safely gather with friends again. The dreamy courtyard is just the spot for the latter. Pre-pandemic, they’d carry the set of floor cushions (Benson’s mom made them) by their bedroom outside to use as extra seating for guests. “It also frees up the dance floor inside,” says Ouellet. The party’s just getting started.

Where we pick up plants and gardening supplies: La Belle Plant.

Best save: The Persian rug from Ned’s mother, and the photography she gave us.

We loved working with: Justin Coates from Three Sheep Studio.

The nicest handyman we’ve ever met: Nathanial Hill of Brawley Made, a furniture designer and carpenter, who helped build out things, including Ned’s desk and our dining table.

If we could go back in time, we’d…reconfigure the bathroom for a bathtub for Michèle.