“The brightness really lifts the space.”

photography by
French & Tye for Bureaux
By
Shoko Wanger 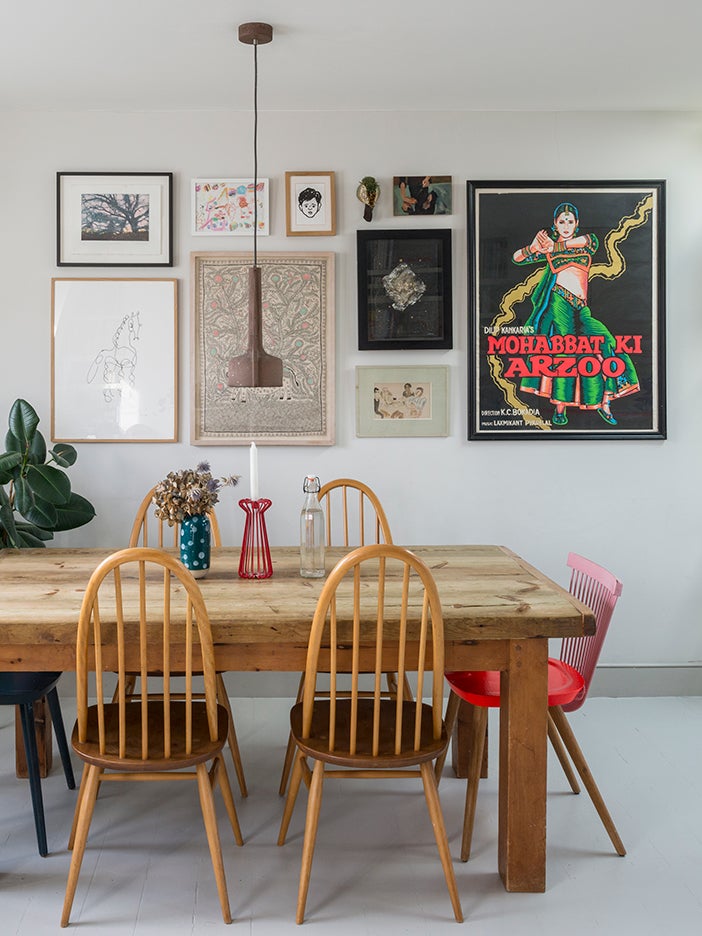 It isn’t every preschooler who gets a say in the design of his family’s home. But when the time came to update their two-bedroom London apartment, architects Jean Dumas and Navjeet Ghuman asked Quentin, the elder of their two sons, if he had any requests—child friendliness, after all, was a driving factor in their decision to renovate. The 4-year-old’s response? He wanted a slide.

The flat, which has been home to Dumas since he moved in 16 years earlier as a bachelor, had more pressing needs: The interior stairs lacked a railing, for instance, and the two-story layout wasn’t as efficient as the family of four required. Because of this the couple—cofounders of Trellik Design Studio and parents to Quentin and brother Rémi, now 6 and 3—paid special attention to maximizing each of its 893 square feet.

Expanding the kitchen by just 6 inches allowed for a deep, floor-to-ceiling pantry outfitted with pull-out compartments, complete with space for wine and glassware; an empty corner next to the stove became a discreet hideaway for a toaster, kettle, and cookbooks. In the same spirit, custom storage was added to nooks and crannies throughout the flat. Drawers beneath the beds hold sheets, towels, and toys, while a cupboard on the landing conceals a washing machine that was once located in the apartment’s only bathroom. Even the narrow entryway was made tidier with two specially designed shoe racks—one for the kids on top, another for the parents on the bottom. “Gaining every inch that we could made it easier for all of us to enjoy the space,” says Dumas.

But the renovation wasn’t centered solely on utilitarian adjustments—for Dumas and Ghuman, play was as important as practicality. The pair chose to offset the apartment’s neutral gray walls with bursts of bright color, from the turquoise paint coating the stairwell to the neon stripes that set oft-unnoticed areas of a home—baseboards or the recess between a kitchen counter and lower cabinets—ablaze in highlighter hues. “I like giving things a little twist,” says Dumas, citing fashion designer Paul Smith, whose otherwise traditional suits might feature a pink or orange lining, as inspiration. “The brightness really lifts the space.”

It also serves to lift the spirit. In the main bedroom a light blue ceiling mimics a clear morning sky, a rarity in London. Gradient curtains from Kvadrat frame the windows, and a layered fabric chair from Mr. & Mr.—made with Bubble Wrap and held together with colored bands—sits beside shelving filled with books, magazines, and collected keepsakes. (Its unevenly sized compartments reflect a similar concept in the kids’ bedroom, where a storage wall, based loosely on the game of Tetris, combines open shelving and closed cabinetry in a variety of sizes.)

Elsewhere efforts to incorporate their sons’ interests—and accommodate their energy level—are evident in both striking and subtle ways. A plywood ledge that lines the stairs displays their artwork alongside family photographs, postcards, and mementos—an evolving collection the boys have a hand in curating. (In keeping with the theme of brightness, the ledge has a built-in rope light hidden underneath, a more sophisticated—and durable—take on string lights.) In the living room, a Trellik-designed coffee table features a zellige tile top with a removable wood tray that can be used for serving snacks; meanwhile the space it occupies is perfectly sized to keep a delicate vase of flowers securely contained, even in the presence of running, jumping, and climbing kids.

The flat’s shared living spaces, after all, are just that: shared. Playthings aren’t relegated to the boys’ bedroom. Instead an IKEA toy kitchen is stationed next to the real thing. And at the heart of it all, in what’s often one of a home’s most trafficked areas, is the much-longed-for slide.

Made using Valchromat and fitted to the interior staircase without any bolts or screws, the finished product required a bit of fine-tuning before it was ready for regular use. “When we first put it in, it was so fast that our kids flew off,” remembers Dumas. “So we added some special felt to slow them down.” Still, two years after Quentin’s original request, it remains one of the apartment’s most well-loved and happily used features.“We want our kids to be a part of this space,” the architect continues. “We want them to enjoy it as much as we do.”

For all of their child-friendly considerations, however, Dumas and Ghuman made a point to reserve a fraction of the flat for themselves: In the dining area a yellow shelf doubles as a ladder to an otherwise inaccessible rooftop terrace used for yoga, gardening, and drinks at day’s end. The colorful, curiosity-laden home they’ve built below may be just as well suited to grown-ups as it is to children—but even those who have mastered that tricky balance need the occasional moment’s escape. Which is only fair, considering the younger set can make a truly sweeping entrance whenever they like.