3 Colorful, Meandering Stripes Guide You Around This Venice Canal Home

It all started with a pair of vintage prints. 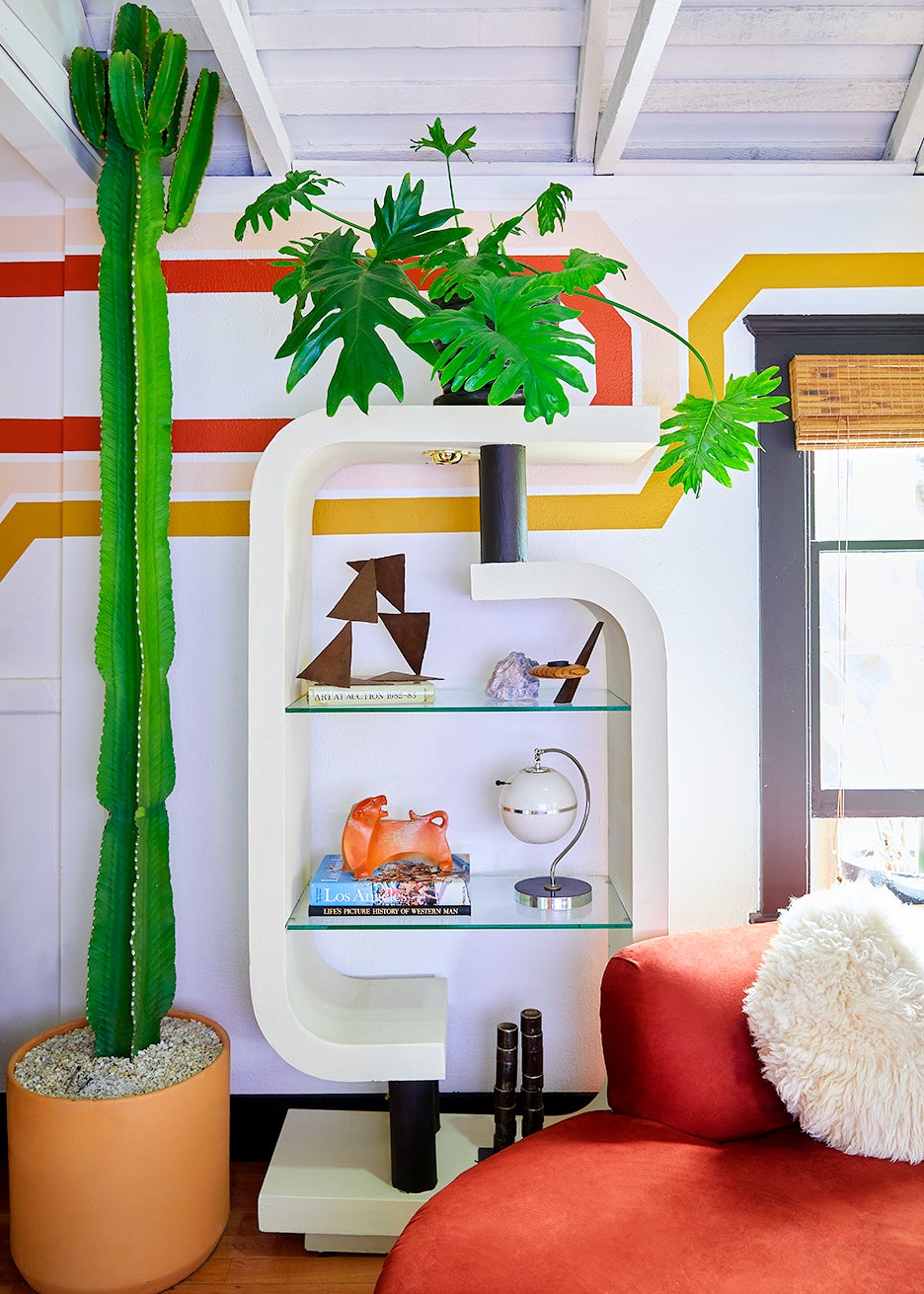 From floor-to-ceiling shag carpeting to mirrored ceilings, John Sharp isn’t afraid to suggest out-of-the-box ideas to his clients. The challenge is getting them on board. “Once they trust you, you hit a peak,” says the designer. In the case of Ned Adkins and Jeremy Lingvall, this moment came with the introduction of two vintage Aztec prints, which now hang above the couple’s nightstands.

Although initially a little tepid about Sharp’s vibrant, out-there suggestions for revamping their 1,500-square-foot Venice Canal, California, house last January—“I was like: Guys, we have to do something about how white this house is,” Sharp remembers—the couple was adamant they didn’t want the typical airy boho vibe that’s become ubiquitous in the area.

Remembering that Adkins, who works in tech, and Lingvall, a real-estate broker, were immediately drawn to the mid-century art pieces he had shown them early on, Sharp had an idea: “What if we create the palette around the five or six colors in these prints?” Ding, ding, ding. Soon after, geometric lines in shades of Sedona earth, mustard, and azure blue ran along the living room walls, each leading to a different room with its own distinct palette. “The hues tie everything together in a really nice ribbon,” says Sharp.

Follow the Yellow (and Orange and Pink) Painted Road

The rusty orange band leads to the couple’s bedroom, where the color wraps around the walls above a picture rail. They originally worried it would look like Halloween, but, “I took a screen-shot of a picture of a white bedroom with a white bed to show them the opposite direction and said, ‘I’m really not available for your fear-based narratives,’ and they came around,” says the designer, laughing. (The adjacent room, an office that the couple is thankful to have invested in just before the pandemic hit, mirrors the paint effect, but in a muted ochre hue.)

Looking to the Past

A low platform bed with built-in nightstands, ignited by the couple’s original inspiration images of mid-century case study houses filled with layers of books and George Nelson lighting, takes up the bulk of the space. On either side hang the designer’s favorite discovery to date: a pair of pendant lamps with reflective colored glass that perfectly matches the palette. “All the windows open to the canals, so they have this really amazing, layered, moody vibe inside with that beautiful view,” says Sharp.

A peachy stripe wraps around the kitchen, where Sharp got scrappy and decided to paint the existing cabinets in a bright blue to save costs. “There was one last color from the prints we hadn’t used, so it was an easy decision,” he says. After upgrading the hardware and swapping the countertops for a simple butcher block, the designer again added his signature vintage touch in the shape of an adaptable breakfast bar, which he placed on casters so it can easily roll out and transform into a drinks station during dinner parties.

advertisement
“What’s nice about the room is that all the windows open to the canals, so they have this really amazing, layered, moody vibe inside with that beautiful view.”

Back in the living room is where it all comes together: A boomerang Vladimir Kagan sofa, which Sharp was already restoring, was his first pick, but the couple was once more hesitant. Would it overtake the space? “I convinced them that it’s what a living room is meant to be about: people sitting around and talking and making connections,” says the designer.

He suggested a brick red velvet to go with the bedroom wall color, and once again the couple was convinced. On the coffee table, two sculptures from Abel Macias are a nod to the other dominant colors in the house.

Upstairs, a shag-covered loft has been nicknamed the Canal Clubhouse. After surfing all day, they slip into their kimonos, drink sake, and listen to records. It’s also where a jungle’s worth of plants live, under an automated grow-light system.

Though Adkins and Lingvall were known to entertain a lot in pre-2020, it’s been a no-go during the lockdown. They called Sharp back for one more project: a barge on the canal that mirrors their house’s style, with furniture bolted to the base and bonus cacti for decor. There, the couple can safely have a few friends over for socially distanced cocktails. Set aglow with sculptural lanterns, it’s become the talk of the street.

Go-to local vintage shop: The Mart Collective, an antique mall with booths from some of the best area pickers in Venice. It’s wherever I go to get into a better mood!

Best source for plants: I often work with C&S Nursery. Their team always leaves me in good hands with a fantastic understanding of species.

The thing in my home that gives me the most joy: The flowers in my grandmother’s stem vase next to my bed.

The object in my home that gets the most use: My Matteo bed set.

This pattern (in my home) is so me: Dots, plaids, stripes, zig-zags—only the good stuff!

The nicest contractor I’ve ever met: Orie Prince and Natalya Cappellini are my favorites.