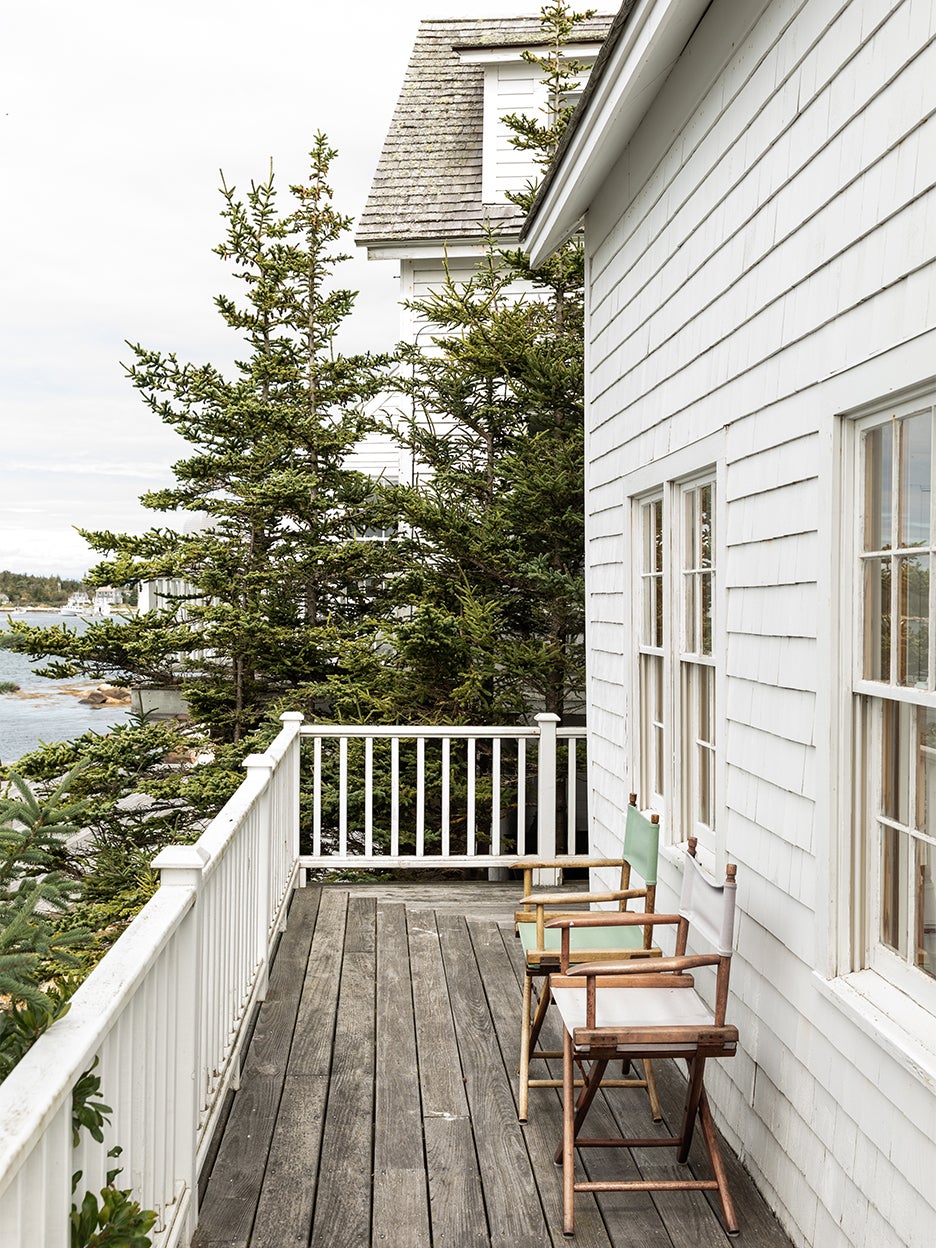 There’s no easy way to get to artist couple Bo Bartlett and Betsy Eby’s Maine home, located on remote Wheaton Island. Start by chartering a boat or a plane to neighboring Matinicus Island. Then take a taxi to the furthest wharf and row across the narrow channel. “It’s very involved,” says Eby. “But that’s by design.”

During the off-season, the artists are based in Columbus, Georgia, where they work out of an old converted cotton mill. Come summer, they make the journey north and get straight to painting. “We wake up when the sun rises and we go to sleep when the sun sets,” says Bartlett. “We’re completely controlled by the rhythms of nature.” When Bartlett first discovered Wheaton Island in 2000, there were two run-down houses on the property. “Most people just wouldn’t touch it,” he says. “It was way too much work.” Refurbishing the century-old structures—blown-out windows and all—was no small feat, not to mention bringing in a generator (though today the place primarily runs off solar energy). Years later, in 2015, the pair worked with post-and-beam architect John Libby to build two studio spaces on what they call the Portugal side of the island (the only thing between them and Europe is open ocean).

The newer studio structures are situated amid blueberry bushes and windswept pines, just 100 steps away from the main house. “The landscape is in control of itself. We are definitely not in control of it,” says Bartlett. The only time the couple did any sort of landscaping was when they went on a grass-planting mission a few years ago. Eby likes to think of all the greenery as an extension of an indoor carpet—it prevents them from tracking mud and dirt inside.

The two studios look practically identical from the outside, but inside they’re modified to meet the artists’ different needs. While Eby prioritized ample wall and table space, Bartlett’s studio is flooded with northern light and features an open loft with a small cot. The upper area, which was partially inspired by Norman Rockwell’s Stockbridge studio, allows him to assess his work from a fresh perspective and gain objectivity. “You also get a view of the horizon over the ocean up there,” he says.

If the studios are all about embracing color and creativity, the main house is about neutrality and seeking quiet—hence the crisp white walls and minimal decor. “Maine has such an abundance of light. You really don’t need to do much to that,” explains Eby. When they acquire new objects or furniture, they consider how long the pieces will last (the fewer parts something has, the less likely it will end up breaking). They also take into account whether or not they can burn it, as it’s a pain to get things off the island once they’re there. “The house will reject something it doesn’t like,” says Bartlett. “A colorful piece of plastic will start yelling at you.”

When Bartlett first set out on refurbishing the home 20 years ago, before Eby came into the picture, he uncovered layers and layers of wallpaper. Peeling away at the treatments was like traveling back in time, he says. “I started with the ’60s, then the ’40s, the ’20s, and finally a print that looked like it was from the Victorian era,” he recalls.

During the initial remodel, all the walls got a coat of plaster and white paint. The only thing they left as is was the pink stairway. It wasn’t until recently that Eby decided to give the chipping surface an update (she stuck with a similar blush hue to honor the home’s roots). “It took forever,” she says, recalling all the priming and detailed brushwork around the treads.

Living on an island as remote as this calls for staying organized. When the pair make their initial trek out every year, they make sure to pack everything they need for the summer in one go, including their canvases and stretchers, which get loaded onto a retrofitted lobster boat with a crane. Once they’re settled in, it’s a constant bounty: Local fishermen and friends drop off vegetables and seafood at their dock. At the end of the season, the couple will hand out small sketches and artworks to show their gratitude. “It’s really quite utopic,” says Eby.

While Bartlett and Eby admit living on a faraway island isn’t for everybody, they credit the ease of it all to their autotelic personalities (meaning they find their source of inspiration autonomously). “It’s a bliss point for me,” Eby says of working out in nature. “You have no distractions. People aren’t asking you to show up at things. There’s just something so honest about it, and that honesty carries through the rest of the year.”