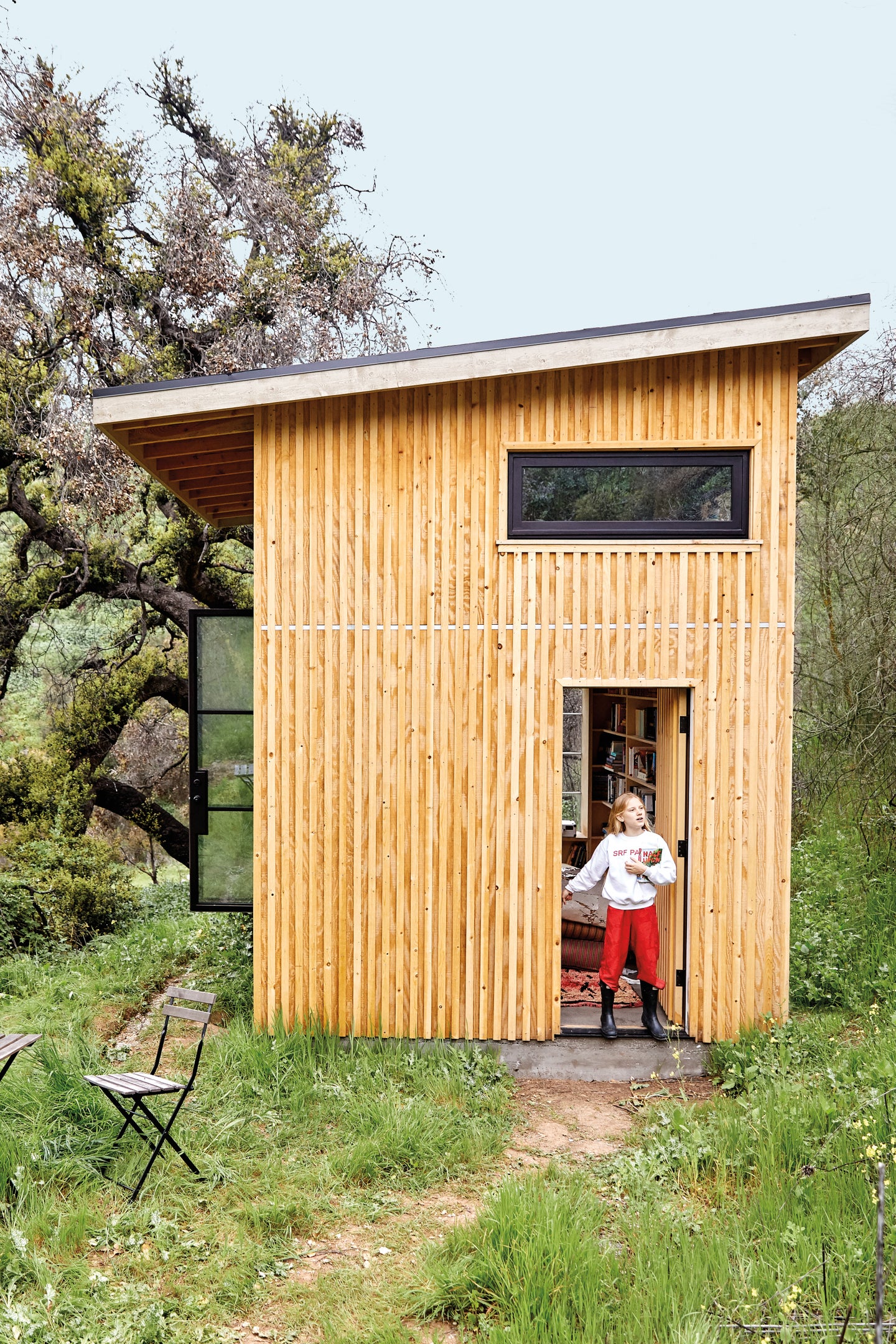 This story originally appeared in the Summer 2019 issue of Domino, titled “Happy Camper.” Subscribe to be the first to receive each issue.

Los Angeles designer Heidi Merrick’s clothing line channels laid-back glamour in a way only a born-and-raised California girl’s could—so it’s no surprise that her family’s weekend escape follows suit. Whenever they can, Merrick and her husband, Johnny Johnson, along with kids Hiver (9) and Alfie (4), leave their home in Silver Lake for a sprawling 55-acre plot perched between Carpinteria and Ojai.

Along with the massive, twisty oak trees, the property boasts flowering apple, pear, apricot, avocado, and walnut trees; a small citrus grove; and rambling fields filled with fragrant cowboy sage, purple lupine, and California poppies. “Johnny and I both grew up in pretty bucolic settings, so we want our kids to know the peace of being outdoors,” explains Merrick.

With that in mind, the family has left the land almost completely untouched. Aside from an uncovered kitchen-dining deck, complete with claw-foot tub, the only structure is a small birchwood library that Johnson designed. “It’s important for us to remain as connected to nature as possible,” Merrick says. “But we needed a place that was dry and where we wouldn’t be rooming with field mice.” They also needed access to their treasured books. The space is lined with titles ranging from Homer’s Odyssey to a set of Nancy Drew mysteries. A vintage Moroccan rug and floor cushions made of fabric from Merrick’s past collections create a cozy spot—in addition to the sleeping loft—in which to read or listen to music.

The surrounding landscape holds extra-special meaning for the designer, who spent her childhood fishing, hiking, and mountain biking, as well as surfing the local break. (Her father is legendary surfboard shaper Al Merrick of Channel Islands.) She always wanted to live somewhere with views of Rincon Mountain—a verdant peak that slopes down and ends at their property line. “We let the land present itself to us,” says Merrick. “We base where we build on where the best light is, where we tend to gather, where the kids like to play.” The deck area is positioned to watch the sunset over the majestic mountain, and before it’s too dark, everyone pitches their tent.

Days are filled with impromptu picnics, a family surf at the nearby beach, or searching for frogs and pollywogs in the property’s creek. “I want Hiver and Alfie to run wild like I did,” says Merrick. “I want them to understand the signs of the ocean, read the clouds, assess a river.” And, of course, there’s the upkeep. Merrick and Johnson proudly do most of it themselves. “We tractor and trim the trees, and I tend to my kitchen garden, where I’m growing lettuce, tomatoes, squashes, and herbs,” she says. One day they want to build a house and be completely sustainable on the land, which also means expanding their brood. “Alfie wants a milking cow and Hiver wants fainting goats,” says Merrick with a smile. “But the immediate vision is mostly tree houses and animal lookouts.”

More Outdoor Escapes: 3 Cute Cabins That’ll Convince You to Try Being Outdoorsy Just 5 Minutes Outdoors Can Make You Happier, According to a Study 14 Crazy Beautiful Glampgrounds to Add to Your Travel Bucket List