Alfresco Showers Are the Norm in This Indoor-Outdoor Australia Home 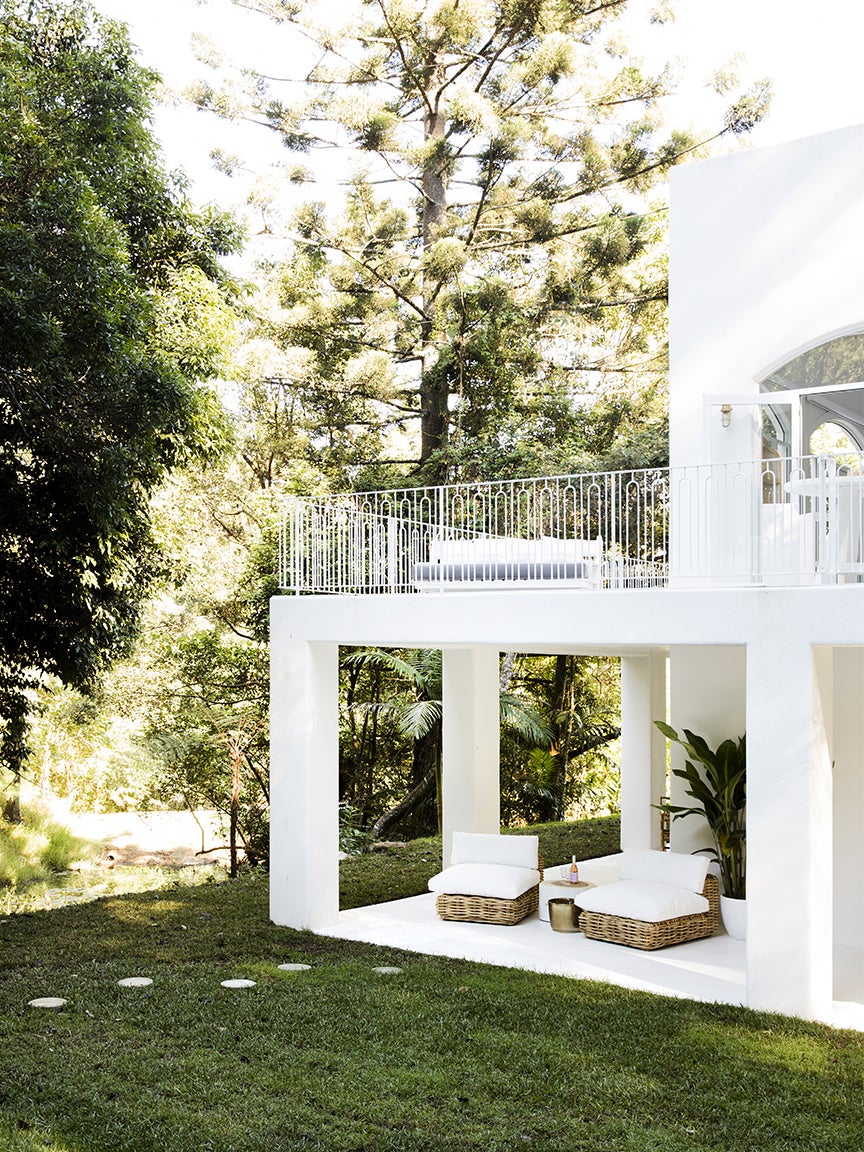 When Sophie Bell and her husband went to check out a lush plot of land in northern New South Wales, Australia, it took them only an hour to decide to put in an offer. “It sounds corny, but it felt like magic,” she says. In collaboration with Three Birds Renovations, the couple set out to build their dream home: a Mediterranean-inspired farmhouse with subtle nods to mid-century modern Palm Springs. Starting from scratch opened up a world of possibilities (think: textured walls, sandy-toned timber floors, and tons of sliding glass doors that provide instant access to nature). “My husband uses the outdoor shower more than the indoor one,” says Bell.

While the final result may look effortless, the construction process wasn’t always picture-perfect. Weeks of rain caused delays in the timeline, not to mention a slippery mess. “The soil is red clay, which is quite punishing when you have a white house,” says Bell. Once the weather cleared up, they pushed forward with the design. High on her must-have list? A spacious studio where she could run her creative agency, Peppa Hart (the office currently takes up nearly half of the second floor). The couple also wanted their two young kids to be able to grow with the house as they got older, so they designated hangout areas just for them and even installed an alfresco pizza oven—now everyone’s favorite place to gather in the warmer months.

Bell and the designers thought way outside the box when it came to introducing natural light inside the home. The round windows (there’s one in the laundry room and another at the end of a hallway) were inspired by the owners’ love of Palm Springs architecture. Even though the panel is fixed glass, it provides a telescopic view of the verdant canopies outside. “It almost looks like a painting,” she says. Like the arched thresholds and wall niches in the rest of the home, the soft curves balance out the flat rooflines.

In the kitchen, upper cabinets were a no-go for Bell, who wanted to maximize the wall space for windows. The panels are adorned with laser-cut aluminum detailing to add interest and tie the arch motif together. Instead, she hid the refrigerator in the butler’s pantry and maxed out the concrete island (poured on-site) with cabinets. The breakfast-bar side is lined with push-to-open panels that are coated with a thin layer of concrete, so they blend seamlessly into the design. When Bell learned that they’d have to close up part of the kitchen to hide the pipes leading up to the master bathroom, she adorned the boxy wall with inset niches to house cookbooks and ceramics.

When the mosquitoes aren’t out, the couple will leave the giant sliding glass door off the kitchen open from dawn to dusk. Once the sun sets and there’s a movie on in the family room, they’ll draw back the sheer floor-to-ceiling curtains (hooked up to a track) to dim the moonlight and make the room feel cozier.

By the time they were ready to get started on the master closet, there was little room left in the budget for custom built-ins. “It was going to be almost as expensive as building our kitchen,” recalls Bell. Cue IKEA: Bell personalized one of its ready-made wardrobe systems with hanging space up top and tons of drawers for jewelry, sunglasses, and other accessories. To make it feel more luxe, they carried the herringbone floors from the adjacent room into the space.

For year-round vacation vibes in the master bathroom, Bell drew inspiration from hotels in Bali. The tub, which she says is “almost like a work of art,” is situated in the middle of the room, just a few steps away from the outdoor shower. “My 4-year-old son thinks it’s the coolest thing,” says Bell. The indoor-outdoor space feels like one, thanks to the geometric floor tiles that continue to the edge of the balcony, overlooking a landscape bursting with greenery.

Bell and the designers broke away from the pared-back, neutral palette in the laundry room with graphic peach-colored tiles from Tile Cloud. “I’m not in there all day, so I felt like I could be a bit bolder in this space,” she says, noting she might tire of something so punchy in a high-traffic area like the kitchen.

The outdoor kitchen is clad in a variation of the laundry room tiles, but it’s the pizza oven (Bell’s husband’s doing) that gets the most attention. “It’s the best thing we did,” says Bell. In addition to pies, the family will use it to cook fish and roast vegetables.

The space is also outfitted with a sink, cupboards, and a refrigerator, so they can fully entertain out there without running back inside. And the glass fence around the pool allows for unobstructed views of the breezy dining space, even when they’re in the house.