But in this Yucca Valley house, it’s prime for posing. 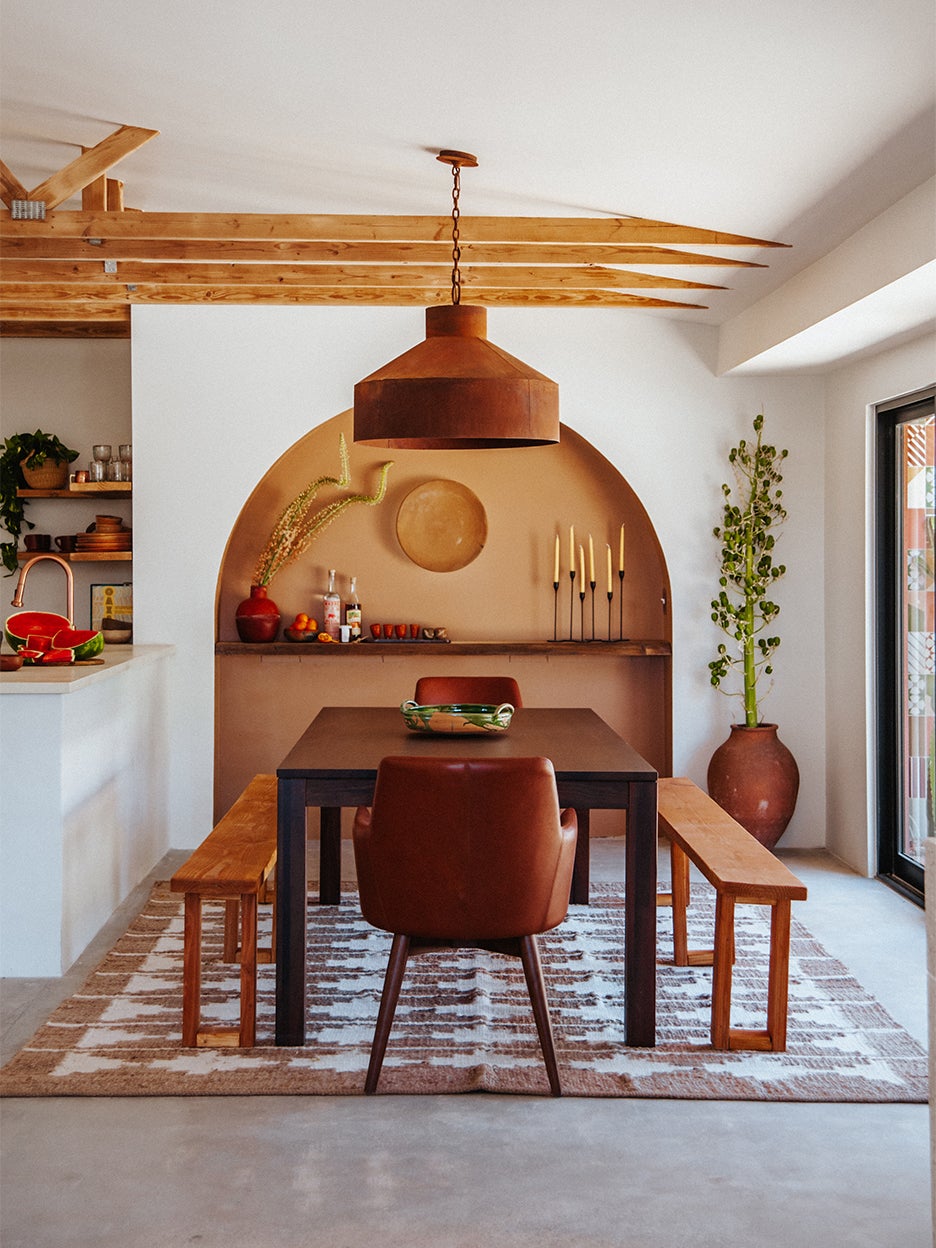 Tucked away on five acres of desert land in California’s Yucca Valley sits an ’80s ranch that is at the beck and call of the arid landscape. Outside, chipmunks, bobcats, and very noisy roadrunners are on patrol. “The birds like to hang out by the front door,” says Claire Thomas, the designer behind the secluded retreat. Thomas teamed up with her longtime friend, cinematographer Yayo Ahumada, the owner of the property, to turn the space into a photo shoot–worthy Airbnb. Inside, concrete counters, furniture made out of boulders, and metal-clad tubs provide a welcoming and cool environment on sweltering summer days.

The designer’s try-anything attitude led her to do things like carve out a round window with a reading nook and clad an outdoor seating structure in nonslip tiles, even if she did get all the math wrong on the first go-round. “I have this thing where I’m optimistically ambitious,” says Thomas. “Or I guess ambitiously optimistic—I always think everything’s possible.”

To boost light in the house, Thomas punched a hole in the wall that connects the record room (or as she calls it, the Christmas tree room, for its lack of distinction) and the main living area. Rather than buy new cement blocks or slatted wood for the structure, the designer used leftover terrazzo tiles from the living room and a metal support system to create the niche.

“I don’t think there’s a piece of tile left on this property,” Thomas says of making use of all the scraps from Concrete Collaborative. The breezeway not only brightens up the public spaces, but it also keeps the house cool by allowing air to pass through the home.

The pergola was another clever DIY—this time a group effort with friends—and Thomas was tasked with the tiling. The first time she attempted to draw out the pieces for the triangular seating structure, she ended up miscalculating where to make the cuts. “It was such a failure,” she says.

Fortunately, her brother (a computer science major) was around to fix the problem before they brought out the tile saw. “We were up until 1 a.m. grouting,” recalls Thomas. For the pergola, they sourced the wood pieces for the structure from Home Depot and topped it with a roof made out of ocotillo, an extremely sturdy, drought-tolerant (read: fire-safe) plant.

A Tudor window (sourced secondhand) may seem like an odd thing to put in a Moroccan-inspired bathroom, but the combination looks effortless, thanks to the etchings in the glass that mimic the pointed arch that frames the reflective gold tub. “I love putting something that looks like it was made for a house in the English countryside in this new context,” says Thomas.

The kitchen isn’t your ordinary IKEA hack. In addition to updating the stock cabinets with Semihandmade fronts, Thomas had the boxes coated in a micro-cement, a type of material that looks like plaster but is a lot less porous. In other words, you can cook with turmeric without fear it will stain the surface. “I wanted people to actually be able to use the space,” says Thomas. Likewise, concrete countertops offer peace of mind.

The halo-like sconces found throughout the house are actually shallow plates that are traditionally used for cooking tortillas in parts of Mexico. Thomas and Ahumada bought four of them (about $2 each) on their last trip to Oaxaca—three of them made it back unchipped—and Ahumada turned them into fixtures (the plates have LED strips behind them). “At night, they put out the most gorgeous light,” she says. “During the day, they’re art pieces.”

In the main bedroom, Thomas combined two ideas she’s been wanting to put to the test: a round window and a built-in reading nook. The result? “It’s my Britney Spears window,” she says, adding that you can’t stand in front of the opening and not strike a pose. In order for the bench to be roomy and comfortable for someone to sit in, she asked the contractor to make it 2-feet deep.

When installing the outdoor tub (a prime spot for stargazing and soaking), Thomas realized they’d have a plumbing issue on their hands come December. “Everyone forgets—myself included—that it snows in Yucca,” she says. To protect the pipes from bowing or cracking in cold temperatures, she added a tiled structure around the parts so that even in the dead of winter you can still get a taste of the desert.